The pulse of diaspora: Bergama in Berlin 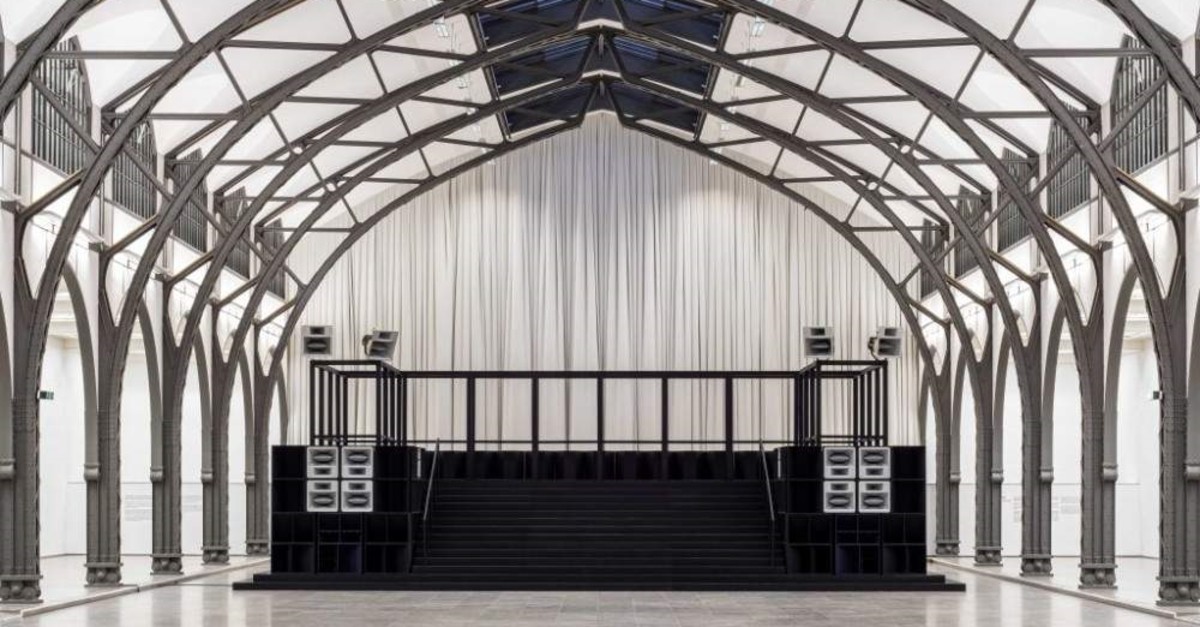 In line with the 16th Istanbul Biennial, Turkish artist Elmas Deniz reflected on the loss of aquatic ecosystems along the coast of her hometown Bergama, which lies just outside İzmir on the site of the ancient city of Pergamon. Bergama has maintained a quintessentially Hellenic charm, having worked hard to preserve its wealth of Grecian cultural artifacts. "Lost waters" (2019) was a three-dimensional wooden relief which opens the pathway to a raw, extinct territory, its contours lain bare. Its linear display of man-made etchings give the piece the feel of an excavation site, with thick streams of black running throughout its contours forming an outline along the landscape.

Cevdet Erek, a fellow Istanbul-based artist, similarly drew inspiration from Bergama for his latest work, which is now displayed in the heart of Europe's contemporary artistic hub: Berlin's Hamburger Bahnhof.

Based on the ancient Greek word "stereo" – which originally meant "solid" – the 34-channel composition "Bergama Stereo" is a site-specific adaptation of the ancient Pergamon Altar, particularly its best-known frieze, which depicts an assortment of giants and gods. In contrast to Deniz's ecological focus, Erek chose to rediscover the context of Bergama's living, human soundscape.

The contributions of both Greek and German civilizations continue to have a marked impact on Western identity thanks to their mutual leanings toward rooted philosophy, lofty architecture and infrastructural achievements – whether in the form of temple columns or the masculine brawn of industrial design. Whether by their ancient colonizing ambitions or modern experiments with imperialism, respectively, the two nations have had an entangled, interdependent relationship with Anatolian lands and peoples throughout their history.

Thus, it is only natural then that Pergama shares its name with one of Germany's most prestigious cultural institutions, the Pergama Museum. In Berlin, it is through the arts, arguably, in which social leadership expresses universal humanism through minority representation with unparalleled conviction, as compared to less enlightened, more isolationist fields of professional and public engagement.

There is no landmark quite like the Pergamon Altar, built in the second century B.C., which has since resumed and been taken to be put on display in Berlin's Collection of Classical Antiquities – the jewel in the crown of museum island, attracting throngs to the European capital ever since its first unveiling in 1901. In the visionary style of a Hellenistic epic, the deities of Olympus and monsters of the underworld wage eternal war between its solemn, marble columns.

Cevdet Erek has reformulated this mythological struggle into a sonic metaphor. Approaching the multilayered block of cubes, and mounting its stairway up to a raised platform overlooking the expanse of the Hamburger Bahnhof interior, "Bergama Stereo" pulses with Berlin electronica and Turkish dance percussion from the Bergama region. Erek specifically accented the double-headed davul bass drum, a traditional ingredient of every rural festival (not to mention a wake-up tool for the groggy at dawn during Ramadan). The mix makes for a jarring, chaotic cocktail of reverberations, akin to the thunderous forces of spiritual conflict.

"Bergama Stereo" is housed inside the vast acoustical space of the Hamburger Bahnhof, originally inaugurated in 1846 as a train station connecting Berlin and Hamburg. It has since become the only rail station in Germany preserved from the mid-19th century – coincidentally, not long before German and Turkish archaeologists began working together to dig the Pergamon Altar from the storied soil of Turkey's Aegean coast. The architect and railwayman Friedrich Neuhaus designed its plush, Neoclassical interior.

The dualism of return

Just as silence can be as essential an element of music as the notes being played, so empty space is required for the resonance of tone. In the hangar-like vastness of the Hamburger Bahnhof, individuals sit on small benches, families and friends saunter along, snap photos and stare into the blank ether, as the davul drum echoes like a wayward spirit at the end of a techno rave, vibrating softly from the austere, blunt construction Erek has invited us into; its bare, rectangular aesthetic blending seamlessly with the site-specific architectural context formed.

While the Pergamon Altar is currently under renovation, slated to reopen in 2023, Erek's piece entices interest in the archaeological masterwork. Also initiating a performance series at Hamburger Bahnhof, which will run through March, he will also be collaborating on fusion soundscapes with Gökhan Deneç, dab-hand at quadrophonic technology, along with Saba Arat, a guitarist and psychologist. In May 2018, Deneç performed at İTÜ's Maçka campus in central Istanbul, projecting pale noise, pops and clicks over an embattled aerial night scene.

A dichromatic spectral scheme of white and black alternate between squares of loudspeakers and their casings. The type and volume of the sounds they emit vary according to the listener's proximity. When close, certain speakers play minimalist rhythms, like a metallic ticking that repeats over a tight pattern in dialogue with sequences ritually beaten onto the davul drum in their crudest, most basic form. From afar, the expanse of Hamburger Bahnhof fills with the loose, muffled skin of a bass drum struck slowly, so as to extend its resound.

In the last twenty years, since 1999, a curatorial alliance has mounted, "Works of Music by Visual Artists", a series of interdisciplinary coproductions at Hamburger Bahnhof, including participation from the Nationalgalerie, Freunde Guter Musik Berlin, e.V., and Ruhrtriennale. Through the winter, Erek will stand together with Deneç and Arat to combine the techniques of unplugged acoustic percussion and electronic beat music into new adaptations of Turkish and German music as it is heard and made in Berlin.

To listen to the ground

For the 2017 Venice Biennial, Erek conceived that year's Turkish Pavilion. His work, "ÇIN", tackled pre-conceptualization, experimentation and improvization as departure points from which he conceived his architectural sound installation as an onomatopoeic allegory. ÇIN resembles "Bergama Stereo" in certain ways. Its centralized staircase, and panel-like verticality, plural yet unified, bears the mark of the artist's mind. He had attempted to build a structure with visible, but inaccessible features.

The idea of "ÇIN" was to consider how sound permeates themes and manifestations of intervention and occupation. In like-minded fashion, the acoustics of the Hamburger Bahnhof have been altered with Erek's installation in direct correlation to the number of people present, and their physical activity. It is a salient comment during a time when the giants and the gods of the Pergamon remain at war, yet, like the bureaucrats of EU immigration, are concealed behind an institutional order that has been passed down from the ancients.