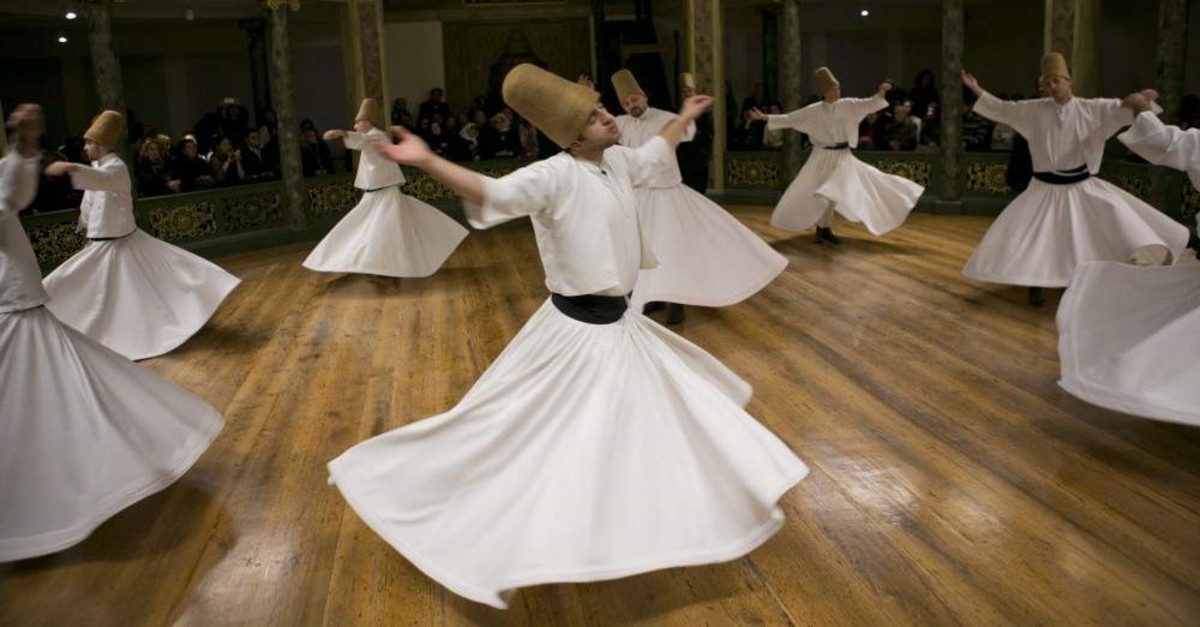 Sema ceremonies will be performed throughout the commemoration. (Photo: Sabah / Murat u015eengu00fcl)
by Anadolu Agency Dec 08, 2019 5:22 pm
Mevlana Jalaluddin Rumi, also known as Jalal ad-Din ar-Rumi, a man of thought and a Sufi known all over the world for his teachings, is being commemorated on the 746th anniversary of his death.
Thousands of visitors from both Turkey and abroad are attending the international commemoration ceremony marking the anniversary of Rumi's union with Allah, known as “The Wedding Day” ("Şeb-i Arus"), or the night of union which is held in central Konya province from Dec. 7 to Dec. 17 every year. The "Wedding Ceremony" celebrations offer the perfect opportunity to gather with fellow admirers of Rumi's teachings in Konya, the place of Rumi's birth, while also providing the opportunity to see mystical historical sites that bring to life the days of Rumi.
Commemoration events, prepared with the theme of “Time of Loyalty” this year, started with a Kandil (oil lamp) Lighting Ceremony, and a March of Love and Unity with the participation of many guests.
Ceremonies started with the lighting of kandil called “Marajal Bahrain” (the meeting of the two seas) by protocol members at the point where Rumi and Shams Tabrizi met near the Alaaddin Hill, and continued with a sema show performed by whirling dervishes and the Gülbang prayer performed at the Mevlana Dervish Sema Lodge. After the opening of the exhibition "Binbir Gün" ("One Thousand and One Days") on the same day, an award ceremony of the 13th International World Beliefs photography contest was held. Within the scope of commemoration ceremonies, Turkish and English Mathnawi courses are being taught while various events are being organized in the city center and districts. Exhibitions of various people, institutions and organizations have also been opened at the Mevlana Cultural Center Exhibition Hall. They can be visited until Dec. 17.
A total of 1,118 programs will be held, including Turkish and English Mathnawi lessons, seven conferences, two international symposiums, 15 Turkish Sufi music concerts and 15 sema ceremonies. Turkish Sufi music concerts will be performed by the Istanbul Historical Turkish Music Ensemble of the Culture and Tourism Ministry’s General Directorate of Fine Arts in company with sema ceremonies at 8 p.m. during the ceremonies, under the direction of Ahmet Özhan as the general art director.
Speaking to Anadolu Agency (AA), the Provincial Director of Culture and Tourism Abdüssettar Yarar said that a large number of local and foreign tourists will participate in the ceremonies. Indicating that sema and mukabele liturgies will be the most important events of the ceremonies, Yarar noted: “There will be 1,118 programs under 24 main topics. We will organize events such as sema shows, mukabele liturgies and tomb-front meetings. As part of tomb-front meetings, the life of Mevlana will be told to the children through theaters and cartoons.” Pointing out that they have been carrying out this event for three years and it attracts great attention, Yarar continued: We will open 12 exhibitions at the university and in various places in the city. We expect 35,000 people to participate in sema programs. Events are in serious demand. Many tourists, domestic and foreign, are interested in the ceremonies. On the other hand, ambassadors of 27 countries in Ankara will participate in the programs on Dec. 17.”
Last Update: Dec 20, 2019 2:13 am
RELATED TOPICS