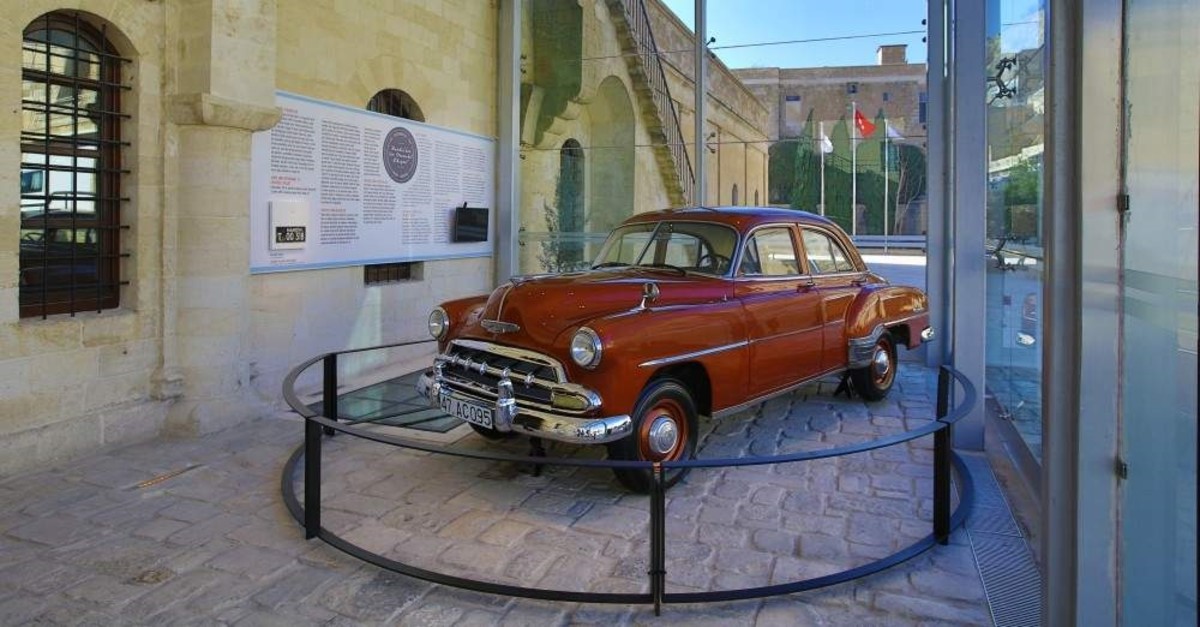 On the 10th anniversary of the Sakıp Sabancı Mardin City Museum, a 1952 Chevrolet that touched the cultural life of the city went on display for visitors

A red 1952 Chevrolet sparkles at the entrance of the Sakıp Sabancı Mardin City Museum with its vivid color. It is hard to believe how the veteran car, which came from the U.S. some 67 years ago to Turkish lands, still looks new and is in running order. The Chevrolet was the first American vehicle brought to southeastern Mardin province and touched the lives of the city's people in various ways before being put on display at the museum on the occasion of its 10th anniversary.

Yahya Muin, who was born in 1913 in Mardin, and his brother Salih bought American automobiles, lorries and busses of different brands and sold them in their hometown. Yahya was called "Muin" as a nickname, which means helper by the people of this region. He took the surname "Özyardımcı" of similar meaning after the Surname Law. The 1952 Chevrolet was one of the cars he bought at a high price for the time. Used as a taxi in the city, the vehicle also served politicians, bureaucrats and judges who visited Mardin. It has a very important place in the daily life of the city, from wedding convoys to expeditions of discovery. 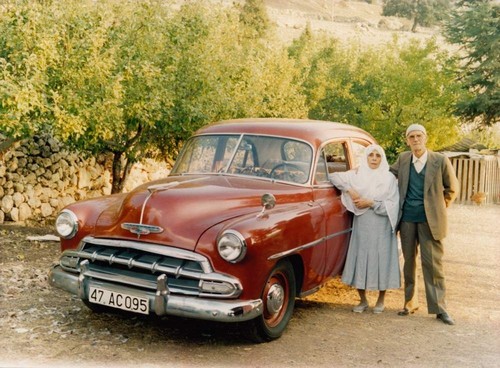 An old photo showing Yahya Muin, his wife and the Chevrolet together (Courtesy of Sakıp Sabancı Museum)

With the income earned from this car, Yahya Muin was able to take care of his family, covering the educational costs of his nine children. Speaking at the ceremony held at the museum on Dec. 24, Yahya's eldest son Muhittin Özyardımcı said: "My father raised nine children with this car. He sent us to the best schools, universities to study. We have never thought about the financial value of it; instead, what is important to us is its spiritual value. We kept the car and protected it for about 40 years after my father passed away. We recently decided to donate it to the museum to keep my father's name alive."

Yahya Muin was the first and last owner of the Chevrolet, which was brought from the U.S. by sea. Although many people wanted to buy it from him, he never considered selling it. According to his children, he cleaned the Chevrolet every day and took care of it as if it is one of his children.

City culture in the museum

For museums, it is important to exhibit goods that reflect the memory of the city in which they are located. The red Chevrolet meant a lot to the Özyardımcıs, and it had witnessed the history of Mardin as it was a part of the social life of the city's people in the past. 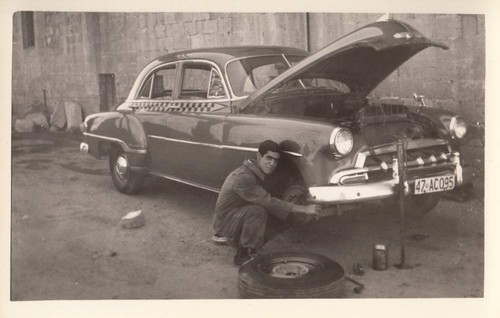 In this black-white photo, the Chevrolet is under repair (Courtesy of Sakıp Sabancı Museum)

Dilek Sabancı, who is a member of the board of trustees of the Sabancı Foundation, also talked about the car at the ceremony: "I am happy to be together at the donation ceremony of this veteran car, which was brought to Mardin in 1952 by late Yahya Muin and touched the lives of many people in Mardin for 28 years. This car reflects the culture of the city. I sincerely believe that the people of this city will embrace it."

Sabancı University Sakıp Sabancı Museum Director Nazan Ölçer continued: "Museums not only exhibit artifacts, but they also convey social heritage and memories of the past. Considering this as a task for Mardin, we opened the doors of Sakıp Sabancı Mardin City Museum-Dilek Sabancı Art Gallery 10 years ago; we aimed to introduce not only the culture of life of the city but also the living values, important personalities and places of it to future generations. The 1952 Chevrolet Deluxe car, which is included in the museum's collection with the interest and generosity of the Özyardımcı Family, has been a witness to Mardin's social life since its production and has been included in the memories of Mardin residents. This car and the series of memories surrounding it will be instrumental in recognizing the past days for visitors."

After the ceremony, Muhittin Özyardımcı delivered the keys of the car to Dilek Sabancı. Recently, the Chevrolet has welcomed visitors at Sakıp Sabancı Mardin City Museum accompanied by a special documentary that tells its story.

The historic building of Sakıp Sabancı Mardin City Museum, located in Mardin's Artuklu district, also houses Dilek Sabancı Art Gallery. This structure was commissioned during the reign of Sultan Abdülhamid II (1876-1909) as a cavalry barrack and built by architect Sarkis Elyas Lole of Armenian descent. In 2000, it underwent restoration by the Sabancı Museum. Tombstones of Mardin inhabitants of different faiths, products of Mardin's traditional handicrafts, jewelry making, weaving, soap making and stone carvings as well as items used in houses and worship places are exhibited on the upper floor of the museum.

Downstairs, the Dilek Sabancı Art Gallery houses various exhibits in intervals. "From Document to Fiction, From Workshop to Museum - Photographs on Mardin," "Ai Wei Wei in Mardin," "An Orientalist in Mardin: Marius Bauer," "Photographs of the East as Viewed from the West" and "Abidin Dino in Mardin" are among the previous exhibitions seen inside the limestone walls of the museum.