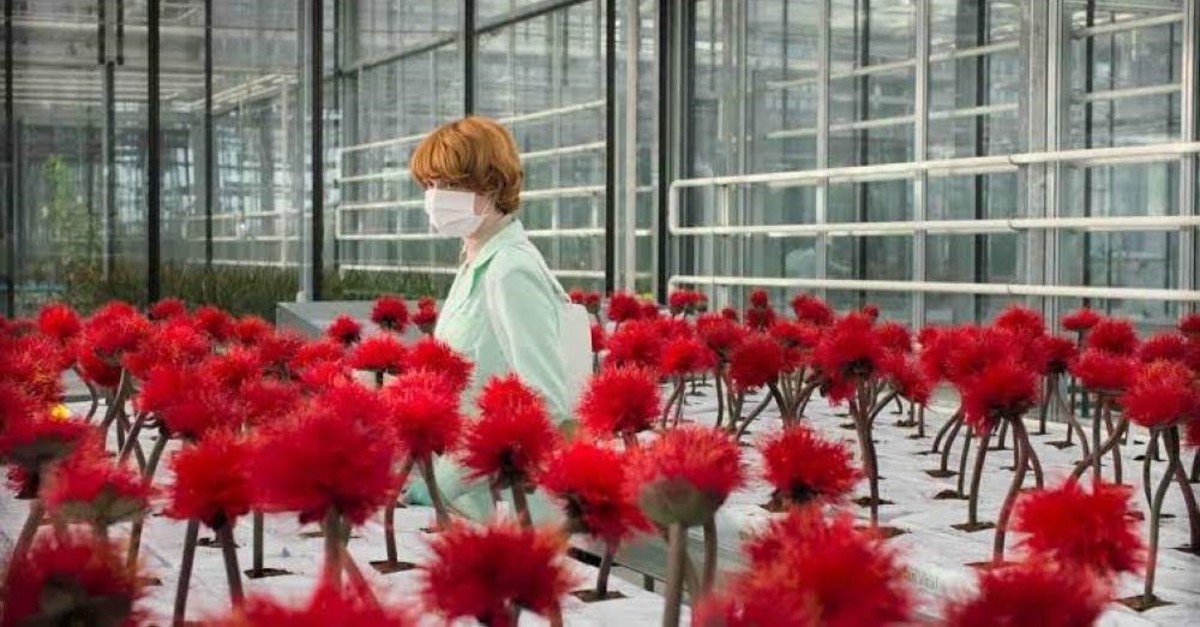 Emily Beecham as Alice Woodard in the greenhouse with her flowers.
by İREM YAŞAR Jan 03, 2020 6:13 pm
We pan out from a greenhouse full of flowers and saplings to find the shrubs contained in a great, botanic laboratory. The camera revolves around the plants, accompanied by the whistle of wind instruments before we meet Alice Woodard at eye level. At the moment, Alice tells other colleagues that her flower needs special care. Thus marks the beginning of "Little Joe," the new thriller directed by Jessica Hausner.

Alice is also the single mother of Joe, as well as a senior flower breeder in the production of the plant she has named after him: "Little Joe." The young lady has been working on developing this red plant for a long time, as its purpose is to imbibe its owner with happiness. Given this unique property, the plant is extremely sensitive and needs more care than your ordinary flower. It must be kept at the ideal temperature, fed often and, most interestingly, it must be spoken to regularly.

The other plants growing in the laboratory are struggling to survive, yet Alice's flowers are in full bloom. Meanwhile, Little Joe is set to be unveiled at an upcoming exhibition, but we are led to believe this will prove difficult given the lack of proficiency of Alice's colleagues. At the same time, it is revealed that she has used unorthodox and illegal methods in the creation of this organism.

The idea of a genetically modified flower that makes people happy seems like a beneficial and brilliant idea at first, but this all starts to change when the dog of fellow plant breeder, Bella, is infected by the plant. Accidentally having found its way into the greenhouse, the dog becomes over-exposed to the pollen that Little Joe disperses in smoke-like clouds. Meanwhile, another plant breeder, Chris, played by Ben Whishaw, is also exposed after running into the greenhouse looking for the canine.

The next day, Bella's dog starts acting strange and even bites her. She insists that it is not her pet anymore. On the other hand, Chris tells Alice that Bella is mentally ill and had tried to commit suicide. Despite her colleagues' skepticism, Bella insists that Little Joe was behind the dog's personality shift.

Alice not only breaks the rules in the production process for Little Joe. Indeed, against company policy, she takes one Little Joe home as a gift for her teenage son. After he smells the flower and inhales the pollen, Joe also starts to act strange. It soon dawns on Alice that she may have created a monster. She begins looking at records of test subjects who have been exposed to the plant and, indeed, in every case, family members tell of deep changes in the behavior of the subject.

How could a flower inflict such odd symptoms? It is revealed that because Little Joe is unable to reproduce, it is trying to remain alive as long as possible as a basic survival instinct. Those infected become obsessively protective of Little Joe at all costs while becoming happy in the process.

In this sense, the movie addresses a highly controversial issue. While humankind embarks on changing and adapting natural genetics without looking at the longterm implications, nature starts to take its revenge. Little Joe destroys the order of humanity and creates its own order by infecting people without being detected, despite technological developments and applications.

At the end of the movie, everyone, including Alice, ultimately surrender to the happy world the plant has created. Nature beats humankind once more.

The second focus subject of the movie is the question of who is and who is not insane. From the beginning to the end, the lead figure of Alice tries is engaged in a struggle to interpret who falls into which mental category. This begins when she tries to find out if Bella is telling the truth about her dog. Then, after witnessing who has started to change, she needs to learn to comprehend whether it is the others or her who is going crazy.

In terms of the subject, the movie is authentic and offers a unique insight into horticultural horror. The vibrant, almost neon colors that this art-house movie uses stand out throughout the feature. The hue of Little Joe particularly serves to emphasizes its potency. The bright colors support the tense atmosphere in which viewers join Alice in questioning the events, forming an unsettling contradiction.

However, the soundtrack overshadows the movie's excellent pacing, the creativity of its plot and the skilled performance of its stars. All elements serve to imbue this small flower with an eeriness, but the moment the soundtrack starts to accompany those elements, it diverts attention away. The flute-like high-pitched sound tampers all efforts that have been made to create this film's tension, and you eventually prepare yourself for the audible disturbance when tense scenes occur. It is clear that the director messed up this factor by trying to give the thriller genre a new sound.