To embody a sketch: The patience of İnci Furni 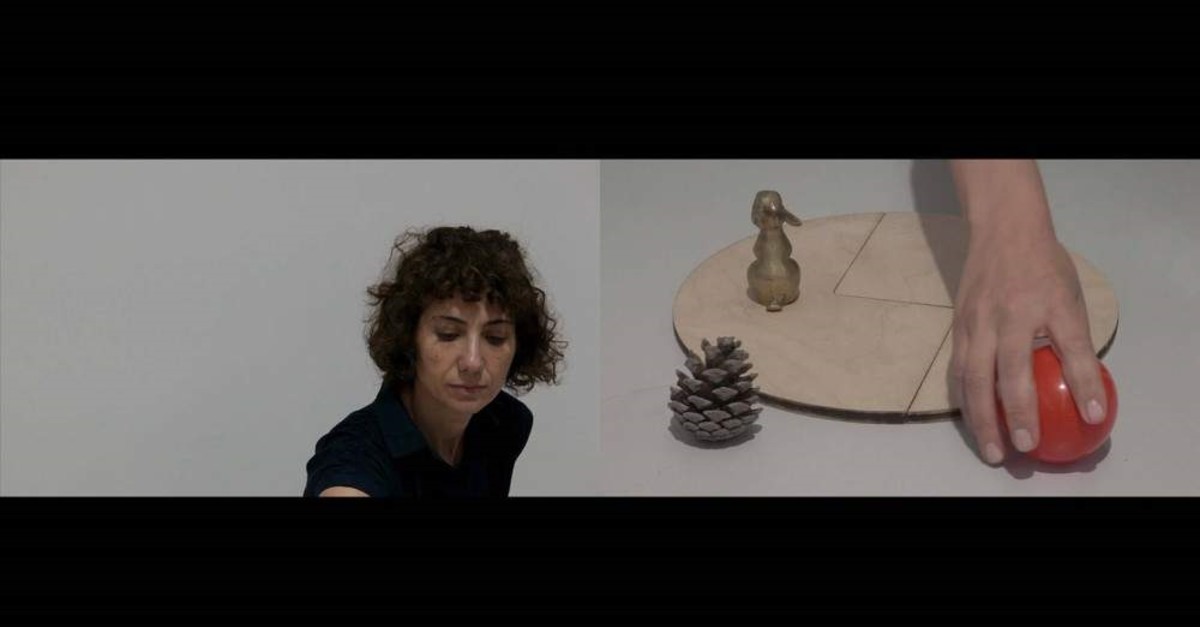 The idiosyncratic solo show of İnci Furni, “She Waited for a While“ at Arter combines videos and drawings of the city's Dolapdere neighborhood, the gallery, its door, light, sound and as the introductory wall text clarifies, also the void

In conversation with İnci Furni, curator Eda Berkmen observed how the artist's drawings were more like site-specific performances, reflecting a union of her body, memories and the materials she uses, often paper or canvas. Furni, an artist of special nuance and character, specializes in enchanting portrayal of stance, balance and pause.

Furni believes in the spiritualistic experience of body projection, also known as astral travel. But so as not to become too esoteric, she adds what she terms "frivolities" that distract the eye from becoming too engrossed in speculation, an experience common to art exploration. "She Waited for a While" (2019), the title of the exhibition, is an installation of drawings and hula hoops, which will be on display till Jan. 26.

Before entering the subterranean gallery at Arter in the industrial Dolapdere neighborhood in Istanbul's Beyoğlu District, a 19-plus minute video by the artist, titled "Lorem Ipsum" (2019), has been mounted, which shows the psychological poise that Furni maintained. The artist has occupied the curatorial space where her show would land some two and a half months prior to its opening. 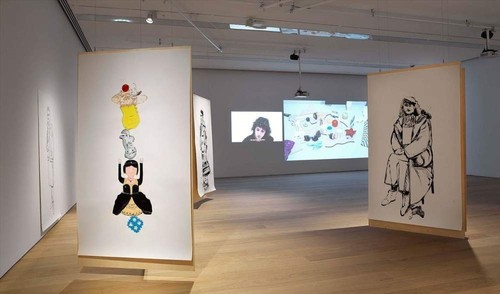 Installation view from "She Waited for a While."

The measure of the temporal phrasing, "a while," is ambiguous. Furni tests its definition against the automatic sliding door that leads into her exhibition's gallery at Arter. In loose, casual black clothes, she stands in the way of the door, choreographing her body as an obstruction to its mechanical spontaneity. Facing its slide straightaway, with one foot in front of the other, or with her shoulder, she tries to stop it from closing.

"Lorem Ipsum" is a play on the blank slate visual used by publishers and designers. Its reference in the context of "She Waited for a While" is not clear though neither is the entire frame of inclusivity in which an art exhibition exists, no less hers in particular. By a creative interpretation, "Lorem Ipsum" speaks to the artist's hesitance to follow through under the spotlight of a prestigious show.

ON THE BACK BURNER

"She Waited for a While" is one of four inaugural solo exhibitions with openings that coincided with the public unveiling of the new Arter building in Dolapdere in September. The exhibition also features Turkish artists Ayşe Erkmen and Altan Gürman and Italian filmmaker Rosa Barba. Furni, along with Barba, is of a younger generation, born in the 1970s. Her process, a combination of multidisciplinary approaches, appears as naively charming as her videoed auto-portraiture.

"I am not a performance artist, but 'Lorem Ipsum' makes me think about being there, the time I had spent putting together the exhibition, the way I heard the sound of the doors opening each time before I saw someone come in, and it also leads me to recognize that all of this was building up to the moment of the exhibition we would keep there for the next four months," Furni told Berkmen, who then commented on the use of the door in her exhibition.

The more time that Furni spent interacting with the door, the more she noticed it taking on human characteristics. It became cautious, she said. Her awareness and confrontation with the limitations and freedoms of white cube curation runs parallel to a degree with Erkmen's show upstairs, a retrospective approach to her work from as early as 1969 to the present. Her piece, "9'04,'' (1999/2019) takes over a wall of the museum and moves it.

On the floor of "She Waited for a While," the drawings of Furni are upright on plywood, as to enact a scene in which people stand, walk and pass a collection of objects, platforms, chairs and more hula hoops. There is an intriguing assortment of individuals. A young man holds a travel briefcase, his coat flecked and dotted with monochromatic streaks of abstraction. He is stone-faced but ready, leaning forward, unafraid.

Hues of black reappear in Furni's more surrealistic sketches. In one, a figure in a short red dress hovers above the contents of a child's imagination, in which a pony, duck and truck fly upward from the dirty, green ground. A motherly figure then represents Furni's bent towards realism. She sports a fanny pack, eyeglasses and a jacket over a dress, with pants underneath and holds a cup. Her facial expression is that of a young woman aging.

The ability to sustain opposition is the cornerstone of drama and of democracy. With a subtle sleight of hand, Furni's drawings dream figments of time as it shows having passed over the faces of her portraits. A girl in a winter coat looks back concernedly. A boy in a puffy jacket trains his focus down and away, as if he is shy of being immortalized. He is the depiction of life, after all, and embraces its disappearing act as truth.

THE MOVEMENT OF PERCEPTION

Almost hidden in the bottom, left corner of the horizontal, single-story show, is a short video titled, "Landscape" (2019). In it, the fingers of Furni come into focus to point out and transcendently pinch her focus within a green, bucolic forest. At one point, she touches upward the trunk of a tree, recalling her physical proximity with the sliding entrance door in "Lorem Ipsum," only with metaphysical distance. The act is echoed in her drawing philosophy.

And front and center, Berkmen curated Furni's 12-plus minute video titled, "I Found This on the Way," projecting it so as to allow its cold, subdued light to pour over the gallery-wide installation. The work is performative, as she sits over a table, and first sets two puzzle pieces of wood together, which are identical to the mounting stands used for her drawings, only more life-sized. The artist scratches her head and begins naming what seems like random objects.

Onto a circular platform, she places a golden duck and beside it a pine cone and red plastic ball. More platforms follow, and varying colored objects, perishable and artificial. By the way she talks, its apparent she is serious, curating the contents of her own mind as a reflection of her surroundings, fragmented into obsolete details, surprising externalities and failed attempts to make sense out of things while trying to build things out of other things.

"I Found This on the Way" explores objective vocabularies. It's a survey of nouns and their lexical isolation in a context without a meaning, or in which there is no meaning other than that assigned by the artist. Furni, in such light, adopts the central tenets of relational aesthetics, a term coined by 16th Istanbul Biennial curator Nicholas Bourriaud to affirm the holistic involvement of art with its social environment. Furni does so in her wordplay.

In the exhibition book for "She Waited for a While," published by Arter and edited by Eda Berkmen and Süreyya Evren, there is significant literary experimentation. "I Found This on the Way" is printed as a kind of concrete poem, the visuals of its word order on the page as important as the semantic association. "I found this on the way / In the evening I'll take it to the bridge and throw it off / Maybe we'll burn it" begins the versification of her visual exploits.