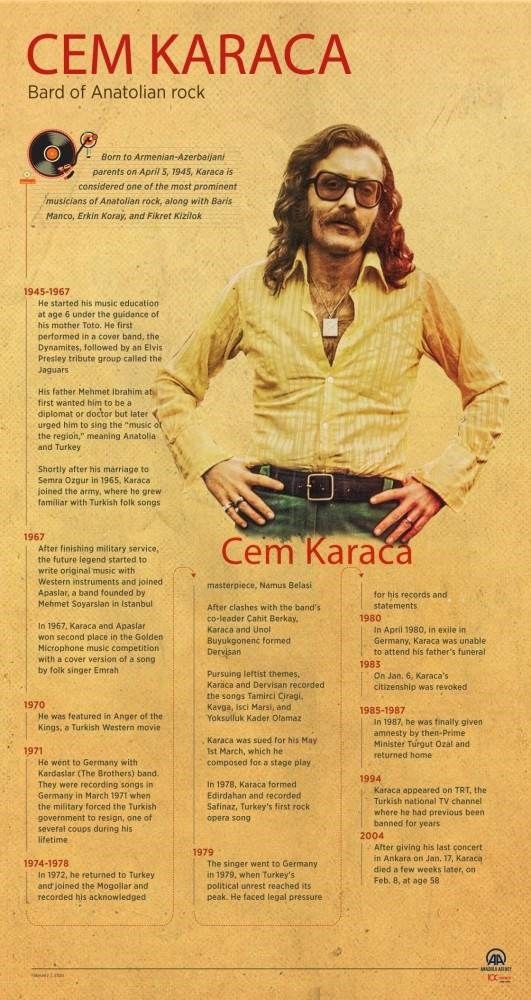 Singer-songwriter Cem Karaca, one of the iconic voices of the Turkish music world, died on Feb. 8, 2004, from heart failure. Turkey will never forget this beloved and respected figure. He was remembered on Saturday, 16 years after his death. But why was he so dear to music lovers? Let's pay homage to Cem Karaca and commemorate him by briefly recalling his contribution to Turkish music.

The Beatles, Led Zeppelin and the Rolling Stones and the like had the world in the palm of their hands in the 1960s with their music. Impressed by the rock craze, Turkish musicians started to produce music in this genre as well. Rock and roll, originated from the U.S., mixed with Anatolian tunes in Turkey. Legendary musicians Cem Karaca, Moğollar and Barış Manço turned back to their roots and played local instruments like bağlama. There was an interest in eastern mysticism, especially in psychedelic rock bands. In this aspect, Turkey was a rare example because it was close to this mystic culture and also had young generation musicians willing to blend rock music with authentic Anatolian melodies. 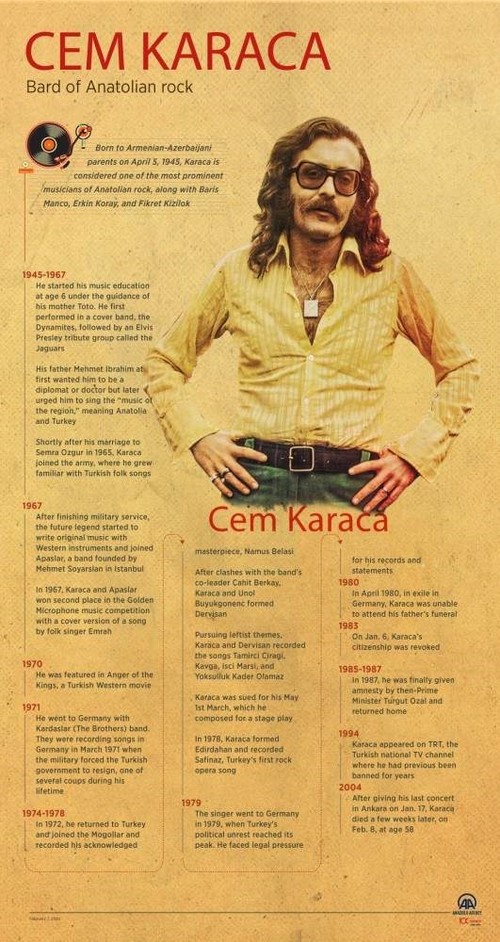 Cem Karaca was one of these prominent musicians of Anatolian rock. Although he was planning to be a doctor or engineer in his youth, he later could not stop the urge to sing the music of the region. During his military service in 1965, he heard many Turkish folk songs. "I used to view it as old and primitive, but I realized that it expresses my feelings," Karaca once said to an interviewer. Then, he joined Apaşlar band with whom he performed great songs like Resimdeki Gözyaşları (Tears on the Picture). Leaving the band with bassist Serhan Karabay to form Kardaşlar (The Brothers) band, Karaca recorded songs in Germany with this band. In 1972 he was back in Turkey and joined the band Moğollar and recorded his renowned masterpiece Namus Belası (Honor Trouble).

Tamirci Çırağı (Apprentice Mechanic), İşçi Marşı (Workers March) and Merhaba Gençler ve Her zaman Genç Kalanlar (Hello, The Young and the Young at Heart) were among his iconic pieces. In 1978, he also formed the band Edirdahan and recorded Safina, Turkey's first rock opera song. He also supported Palestine resistance with a stand at the international fair in the Aegean city of İzmir. Karaca covered Mutlaka Yavrum (Absolutely, Baby) and Adiloş Bebe (Baby Adiloş) to raise awareness of the Palestinian issue. To learn more about Karaca's life and musical career or to view an exclusive portrait of the artist, you can visit our website.