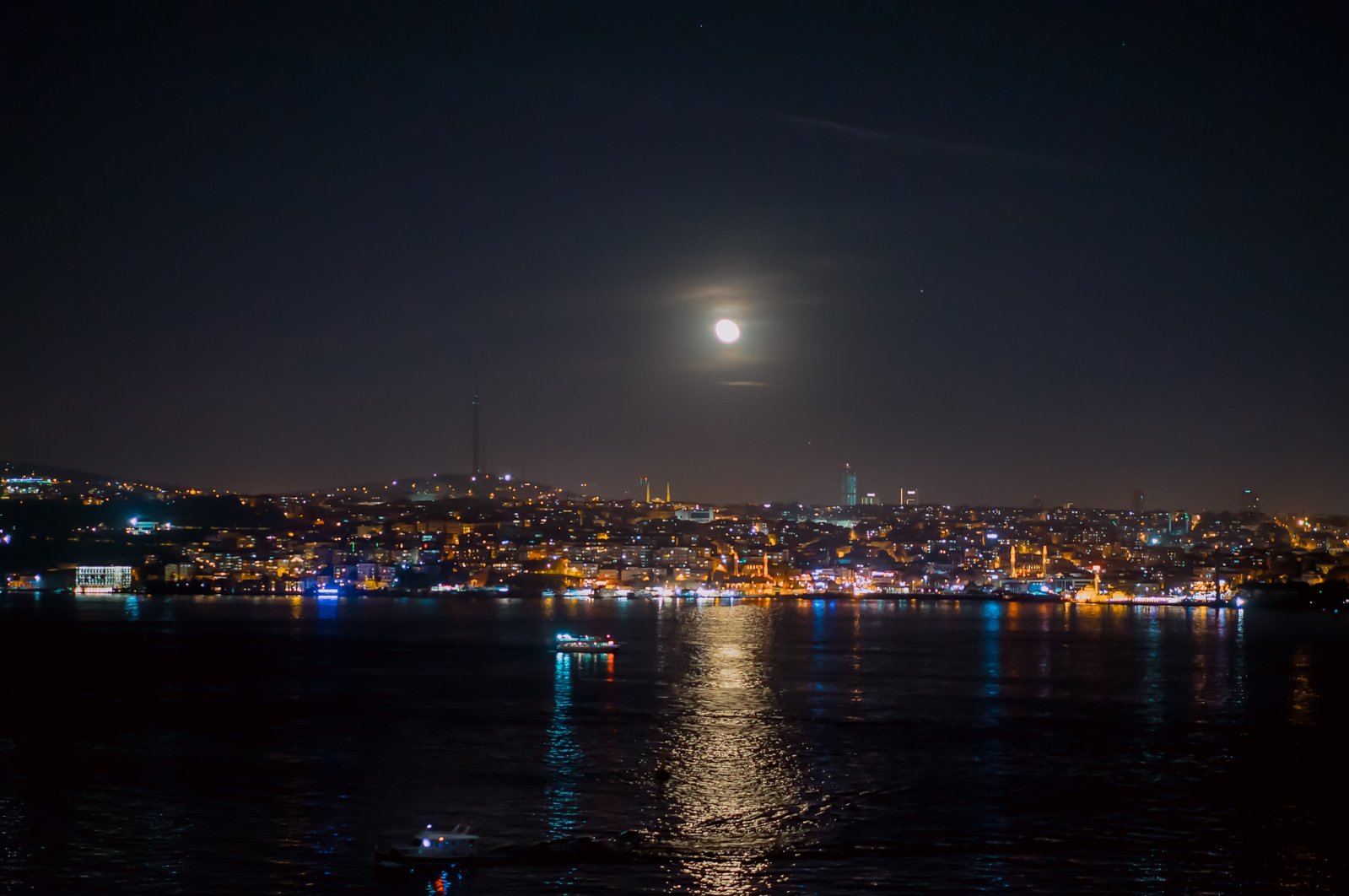 The moon creates a beautiful sea sparkle on the waters of the Bosporus along the coasts of Istanbul. (iStock Photo)
by Yasemin Nicola Sakay
Apr 30, 2020 4:30 pm

From a romantic expression for sea sparkle to three separate words for heart, there are truly unique words in Turkish that just don't translate. Here are 10 words that would make us all happier if they were adopted into English

How many times have you found yourself in a state of self-loathing or panic trying to find the equivalent of a word or phrase you use in your native language only to realize that there is simply no satisfactory equivalent of it in a foreign language, so you just stand there trying to explain what you mean with an awkward, embarrassed grin on your face?

It has happened to the best of us.

Of course, it’s only natural that some words and expressions don’t really have a corresponding translation in another language – not a complete one in both a syntactic and semantic sense anyway. Every language is borne out of a different culture and thus is connected to its people. When you interact with a language other than your own, you are also interacting with the culture that speaks the language and get a sense of how they live, think and express their emotions.

Learning a new language is hard, and speaking Turkish is surely a challenge for Anglophones. Yes, for some it is easier than others, but getting used to an alien set of grammatical rules and word structures on top of a flurry of loanwords and creative, envelope-pushing idioms and proverbs is no easy feat. But what makes Turkish all the more appealing to learn lies exactly there.

There are a plethora of unique Turkish words that don't seem to have an equivalent in English, but here are 10 beautiful, meaningful and a few outright weird selections:

Although most often literally translated as “May it come easy to you,” its closest semblances would probably be “Keep up the good work,” “ May it be easy (breezy)” or “More power to your elbow.”

Turks say this to those who are working, whether it is a job that requires physical power or a lot of mental concentration. You would usually say this at the beginning of someone starting to work on a given task. It recognizes that the work in question may be difficult for the person engaging in it and expresses a genuine hope and wish of success to its recipient.

Most of the time, you’ll hear this pronounced as “buyrun.” “Come this way," “please,” "here you are," are just a few ways it could be translated. Turkish people use the word when they are presenting something to someone, giving a person the right of way or even at the dinner table, asking guests to take their places. It is a polite word with a somewhat formal tone to it.

If you’d say kolay gelsin to someone preparing dinner and cooking, ellerinize sağlık is what you’d say after eating that meal to thank the host/cook. Literally translated, it is "health to your hands" and expresses gratitude to the person cooking for taking the time to produce something delicious with their own hands. Like you would say "compliments to the chef" in English, in Turkish you'd say "ellerinize sağlık."

Apart from food-related instances, you could also use this phrase after seeing someone create a beautiful piece of art – a painting, a poem or even a flower arrangement in their garden. Here, "good job!" is a better translation into English, but it still doesn't capture it properly.

One important point to note. When you are with friends or people that you are closer with and on a first-name basis, “ellerine sağlık” would be more appropriate than saying “ellerinize” as the latter is more formal and indicates some distance between both subjects of the conversation.

In the simplest of terms, it is a sincere get-well wish. It is used particularly after someone has gotten sick, and is often translated as "Get well soon." If we were to translate it word-for-word it would mean "may it pass," with the "it" referring to whatever is ailing you at that time. Apart from health-related issues, you can also say "geçmiş olsun" if a friend has had an accident but survived with minor scrapes or cuts or gets something stolen.

Now it’s time for more charming words that have solidified their presence in many literary masterpieces.

This was the first word that immediately popped into my mind when a copy editor from the Daily Sabah asked on Instagram what our favorite Turkish words were. Yakamoz is that beautiful phenomenon that happens at night when the shimmering moonlight reflects on the water. It also describes the blue, fluorescent glow created by bioluminescent plankton in the water.

Most Turkish people’s first encounter with the word is either in a poem or songs from Rafet El Roman, İbrahim Tatlıses or Ahmet Kaya. After all, it does have a romantic appeal to it. You'll likely see a lot of seaside restaurants named after this word as well.

The word (actually of Greek origin) is so captivating and perfect for some that it even won first prize in a competition in Berlin entitled "The most beautiful ABC of the world" ("Das schönste ABC der Welt") out of 2,500 unique contenders.

Hüzün is more than just a simple word for Turks. It is a complex feeling; it exudes a sense of melancholy, inexplicable sadness riddled with romanticism, it expresses a loss or inadequacy. No wonder it is used as a theme or state of mind in many authors' or filmmakers' works. Perhaps the most widely known example of its usage is in Orhan Pamuk's autobiography, "Hüzün." He argues that the word borrowed from Arabic is simply untranslatable, hence he has kept it as-is in the English versions of his writings.

Turks have a lot of heart and love-related words in their arsenal, and this is just one of them. Out of the three Turkish words for heart – the other two being yürek and kalp – gönül is not the actual, physical human/animal heart that pumps blood but it is in the metaphorical sense. The emotions and the love we feel come from the gönül. The thing that breaks when a loved one hurts you is gönül. It is also the thing you must work hard for to win someone over (see. gönlünü kazanmak). If you are a kind person doing good deeds, you can also earn a place/be enshrined in people’s hearts (See: gönüllerde taht kurmak)

This word is also a favorite of songwriters; just look at songs by Ebru Gündeş or Zerrin Özer.

He, she and it. Turkish has a single-letter, genderless word for all of it and it is "o." Although it can lead to a lot of confusion about who did what, it finds great use in mystery novels.

Famously lacking a third-person singular pronoun, English has for a long time been debating creating and widely using a gender-neutral pronoun, and in 2019 Merriam-Webster declared "they" as the word of the year – though this in itself also creates confusion (is it plural or singular?).

It sounds like a whole lot of gobbledygook, doesn’t it? It is normal if you feel like you are having an aneurysm when you are trying to pronounce this 70-letter behemoth of a word.

Derived from the noun "muvaffakiyet" (meaning success in English) of Arabic origin, this word means “As though you are from those whom we may not be able to easily make into a maker of unsuccessful ones.” In fact, a story was even contrived just to use this word.

This was the runner-up to that mammoth word above I will not repeat.

This word was born when Czechslovakia broke up and became the Czech Republic (or Czechia since 2016) and the Slovak Republic. Meaning “you are reportedly one of those that we could not make Czechoslovakian,” the word is a real tongue twister. Thanks to being an agglutinative language and sleight of grammar, it's possible to create such words that seem like they go on forever in Turkish. Although technically just one word, when all these suffixes are combined together they form rather a sentence.