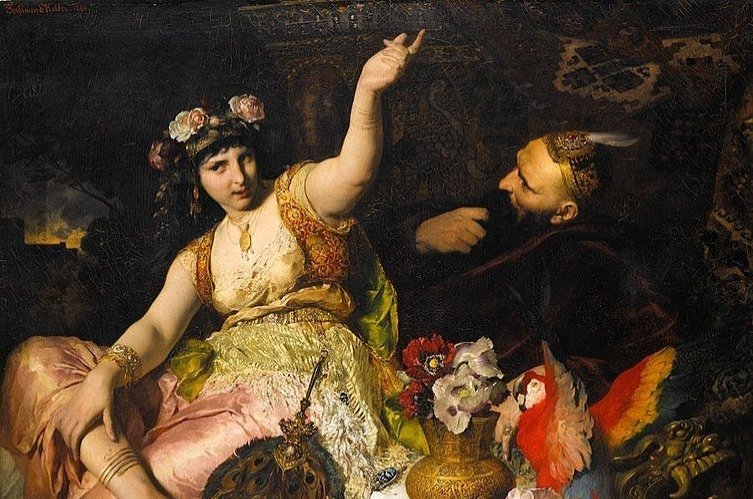 A painting by German artist Ferdinand Keller showing Scheherazade, a major female character and the storyteller in the frame narrative of “One Thousand and One Nights”, and Sultan Shahryar, to whom she tells stories.
by ALİ TÜFEKÇİ Sep 09, 2020 12:16 pm
Edited By Irem Yaşar

The storied collection of uncertain origin, often called “Arabian Nights,” has long been considered a treasure-trove of literary styles and genres inspiring generations of artists

While expounding on the Latin expression "Ex Oriente Lux," which stands for “out of the East, light comes,” German Orientalist Erdmute Heller has said: “This phrase does not symbolize the sun moving from east to west every morning. This light represents other bright things that have flowed from east to west, entered German culture-language through books and already become a part of daily life, such as smell, color, peace and elegance, aesthetics and knowledge. As a matter of fact, many researchers who have studied the relations of Eastern culture with the West have come to the same conclusion."

What is meant by the East here is Islamic culture and civilization. For example, one of the reflections of the Turquerie, the cultural and artistic movement that denotes Ottoman influence in the arts, culture and fashion of Europe from the 16th to 18th centuries, appeared through literature. “One Thousand and One Nights,” also called “Arabian Nights,” is a collection of largely Middle Eastern and Indian stories of uncertain date and authorship that was the most renowned among these books. Since oral-literary products such as tales, stories, legends and epics have been developed in cultural memory for centuries, they have greater effects than written materials. “One Thousand and One Nights,” which has been passed down from generation to generation in the Eastern world, traveled all over Europe and shaped world literature with its magical effect.

These tales, whose original Arabic name is “Alf Laylah wa-Laylah,” are a corpus of frame stories in type and technique. This collection is comprised of one main case and other narratives inserted into it. The main story is like the thread of a necklace while the exemplary tales attached to it are like pearls.

Those who have done research on the origin of these stories were mostly Europeans. The tales, which are considered to have taken their final form during the Mamluks era in Egypt, have different versions in many world libraries. The first scholars to have conducted research on these written texts were Antonie Galland, Hermann Zotenberg, Joseph von Hammer-Purgstall and Helmut Ritter. A specialist in Sanskrit – an old Indo-Aryan language – August Wilhelm von Schlegel said the tales are of Indian origin, while French linguist and Orientalist Silvestre de Sacy rejected the stories' Iranian and Indian elements in the early 19th century.

The diversity of “One Thousand and One Nights” and the differences in the places they are set – including India, Iran, Iraq, Egypt, Turkey and more – indicates that they were not written by the same author. Research has shown that the stories were accumulated through four different channels forming the corpus. They are the Indian and Iranian tales, the Baghdad tales of the fifth Abbasid Caliph Harun al-Rashid era and the Egyptian tales of the Mamluks era.

Galland, who first translated the collection into French, added the famous stories, “Aladdin and the Magic Lamp” and “Ali Baba and the Forty Thieves,” himself. He stated that he heard these stories from a Maronite storyteller from Aleppo. The book was printed several times in Paris between 1704 and 1717 under the French title “Les Mille et Une Nuits” and began to travel all over Europe.

The first translation into English was by Robert Heron. Published in Edinburgh in 1792 under the name “Arabian Tales: Being a Continuation of the Arabian Nights Entertainments, Consisting of One Thousand and One Stories,” the book has also been repeatedly printed over time into new translations from different languages such as Italian, Spanish, Portuguese, Danish, Swedish, Finnish, Dutch, Russian and Czech. It was the famous Ottoman historian Hammer-Purgstall who converted it into German.

“One Thousand and One Nights” has always attracted the attention of literati and readers since emerging in Europe. It has deeply influenced various branches of art, especially literature, and has become a unique nutrient for the worlds of imagination and thought. Although it is the target of some criticism, it has gained a significant place in world history and shaped many famous writers in the West.

In France, where it was initially published, Voltaire was the first author to have fallen under its spell. It influenced almost all the works of the mastermind of the French Revolution. He said that he was able to write his stories after reading the tales 14 times.

Famous for his works titled “Persian Letters” (1721) and “The Spirit of The Laws” (1748), Montesquieu takes his main idea that laws and social institutions differ by time, countries and climates from “One Thousand and One Nights.” Daniel Defoe, the author of “Robinson Crusoe,” is another author affected by the tales.

Famous novelist Stendhal said that one of the two books that he wanted to forget was “One Thousand and One Nights,” but he could not do so and could not stop joyously reading it. For him, the other was “Don Quixote.”

Jacob Grimm and Wilhelm Grimm, known as the Brothers Grimm, confessed to making use of “One Thousand and One Nights” when writing eight stories in the series “Kinder-und Hausmärchen” (“Tales of Children and the Home”). For instance, “Simeliberg” was inspired by “Ali Baba and the Forty Thieves.”

The traces of “One Thousand and One Nights” are seen in the works of leading archaeologist Austen Henry Layard, Danish fairytale writer Hans Christian Andersen and the Irish poet and playwright Oscar Wilde, as well.

These tales are also an inspiration for theater, cinema, painting and other branches of art. The fascinating book has left a strong mark, especially on Romantic artists. Philosopher, novelist and playwright Jean-Paul Sartre said the book of tales is “not only a favorite work for Montesquieu, but the favorite book for every friend of romantic poetry.”

Moreover, British soldier Thomas Edward Lawrence writes in his memoir, “The Seven Pillars of Wisdom,” that he gained interest in the Middle East due to the tales. The spy, dubbed as "Lawrence of Arabia," would play a leading role in the uprising and organization of the Arab countries against the Ottoman Empire during World War I.