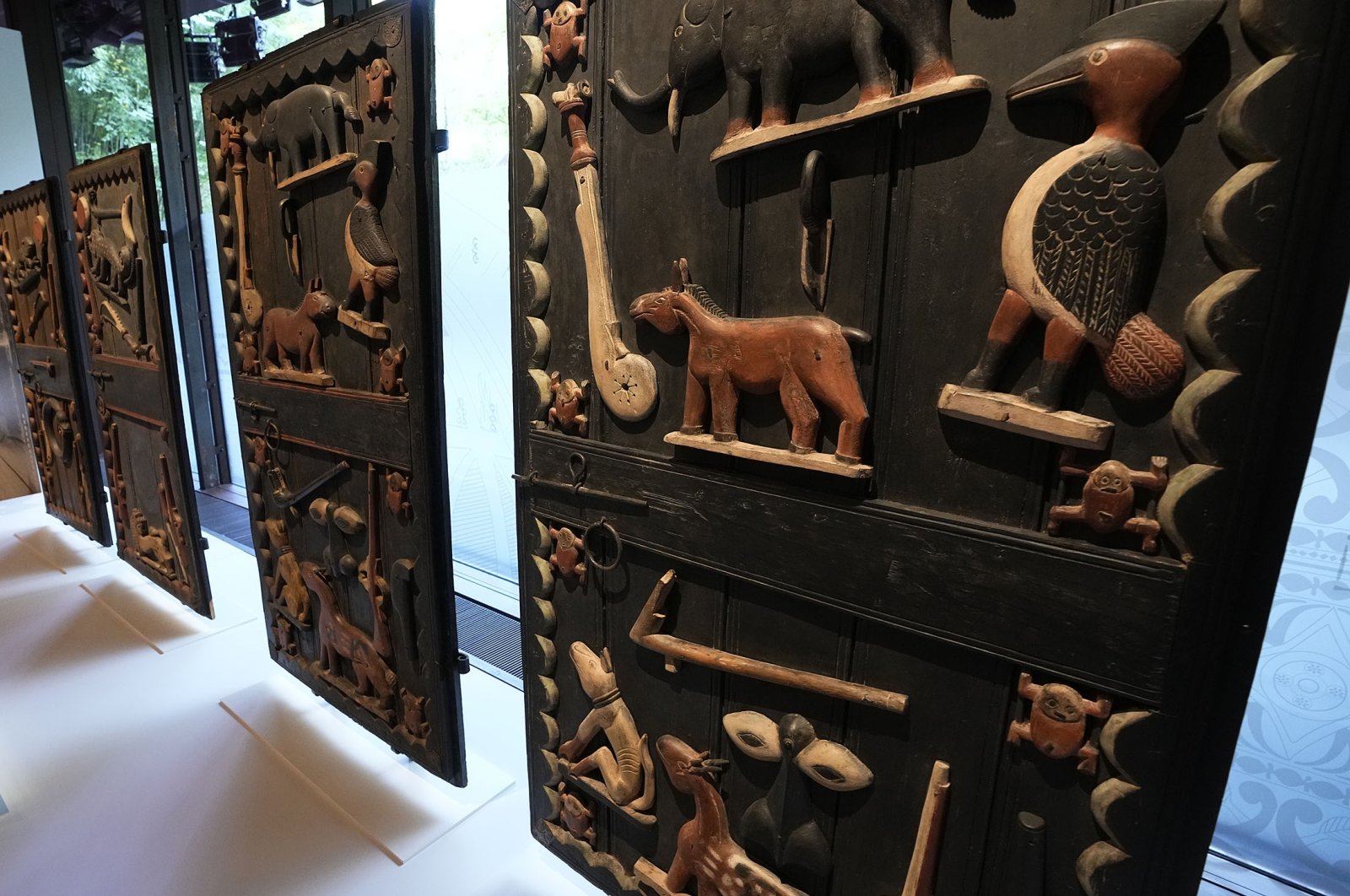 Over a dozen colonial-era treasures are on display for one last time in a Paris museum as France has announced that the 26 looted artifacts will be returned to their homeland, to Benin, a landmark gesture described by the West African country as "historic" and one that could have potential ramifications for other European museums.

The wooden anthropomorphic statues, royal thrones and sacred altars were pilfered by the French army 129 years ago. The French will have a final glimpse of the objects, from the collection known as the "Abomey Treasures," in the Musee du quai Branly –Jacques Chirac from Tuesday through Sunday.

Calixte Biah, curator of the Museum of History of Ouidah, Benin, where the artefacts will first be exhibited, said the occasion was historic.

"It's been more than one century that they have been removed from their historical context. And when you look at the quality of each of these artifacts altogether, you realize that ... there were great artists," he told The Associated Press (AP).

Benin is founding a new museum in Abomey, partly funded by the French government, that will ultimately house the works.

President Emmanuel Macron suggested that France now needed to right the wrongs of the past, making a landmark speech in 2017 in which he said he can no longer accept "that a large part of many African countries' cultural heritage lies in France." It laid down a roadmap for the return of the royal treasures taken during the era of empire and colony.

So far, however, France has only turned over one item – a sword handed to the Army Museum in Senegal. And the 26 works going to Benin represent a tiny handful of the more than 90,000 artifacts from sub-Saharan Africa alone held in French museums.

"We see 26 artefacts. There are others, no? So I wouldn't say that we are ending a process. I'd say we are at the beginning of a process," Biah said.

"I think it would be decent that other countries which hold African artefacts take the same path as France," he added.

Earlier this year, Germany started a similar move. The decision was taken that German museums should work on a restitution plan to return to Nigeria artifacts known as the Benin Bronzes next year. These were looted from the royal palace of the Kingdom of Benin, in what is now southern Nigeria, by a British colonial expedition in 1897.

Yet critics of such moves – including London's British Museum, in a decadeslong tug-of-war with the Greek government over a restitution of the Elgin, or Parthenon, Marbles – argue that it will open the floodgates to emptying Western museums of their collections. Many are made up of objects acquired during colonial times.

The British Museum said Monday it is working on a collaboration with Nigeria, linked to the construction of a new museum in the West African country, which will allow to "reunite Benin artworks from international collections."

French Culture Minister Roselyne Bachelot tried to assuage jitters among European museums, emphasizing that this initiative "will not create a legal precedent."

A French law was passed last year to allow the restitution of the statues to Benin, and of the sword to Senegal.

But she said that the French government's law was intentionally specific in applying solely to the 27 artifacts. "(It) does not establish any general right to restitution" and "in no way calls into question" the right of French museums to hold on to their heritage.

The story of the "Abomey Treasures" is as dramatic as their sculpted forms. In November 1892, Colonel Alfred Dodds led a pilfering French expeditionary force into the Kingdom of Danhome located in the south of present-day Benin. The colonizing troops broke into the Abomey Palace, home of King Behanzin, seizing as they did many royal objects including the 26 artifacts that Dodds donated to the Musee d'Ethnographie du Trocadero in Paris in the 1890s. Since the 2000s, the objects have been housed at the Musée du quai Branly – Jacques Chirac.

Gaelle Beaujean, head of the Africa collections at the museum, stressed that "these artefacts have also been seen by artists (in France, and) inspired (architect) Le Corbusier ... In fact, since 1893, they are very much engraved on the French memory as well."

"They are part, I believe, of a common history," she added.

Macron is to visit the exhibit on Wednesday. The restitution process "aims at allowing the African youth to have access to their own heritage in Africa, and not in Europe only," the French presidency said in a statement.

Benin's Culture Minister Jean-Michel Abimbola called the return of the works a "historic milestone," and the beginning of further cooperation between the two countries, during a news conference last week. The French Development Agency will give some 35 million euros ($40.61 million) toward the "Museum of the Saga of the Amazons and the Danhome Kings" to be built in Abomey under a pledge signed this year.

While locals say the decision is overdue, what's important is that the art will be returned. "It was a vacuum created among Benin's historical treasures, which is gradually being reconstituted," said Fortune Sossa, president of the African Cultural Journalists Network.