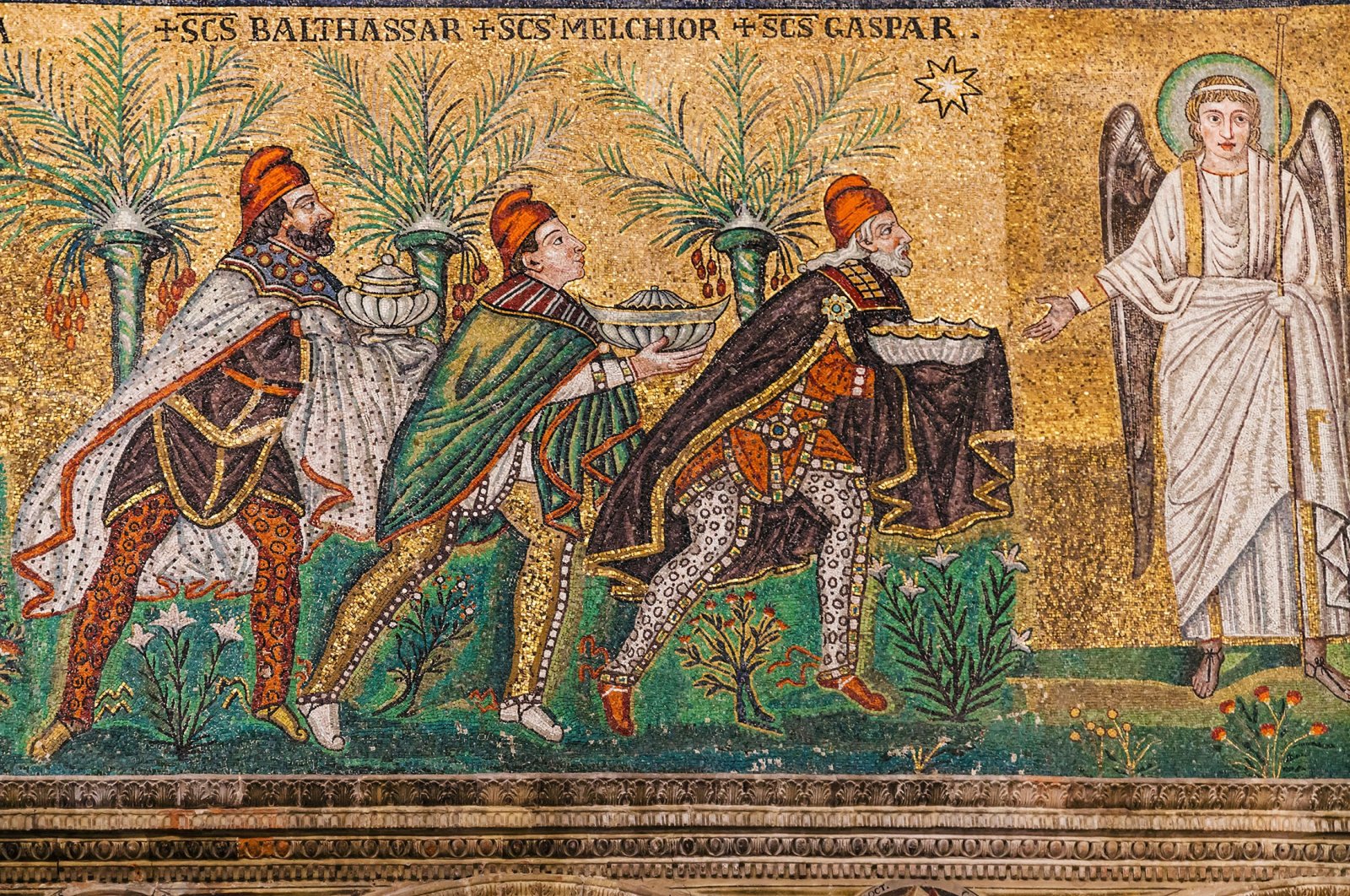 A mosaic depicting the three magi and Jesus Christ can be seen at the Basilica of Sant’Apollinare Nuovo in Ravenna, Italy, Nov. 4, 2012. (Shutterstock Photo)
by Mehmet Hasan Bulut Jan 02, 2022 10:30 am

With its history beginning once upon a time in ancient Egypt among gods and witnessing the birth of Hermeticism, to becoming a symbol of anarchists and hopping between American and French revolutions, a simple red cap spins a fascinating tale through history

In the aftermath of the French Revolution, Louis XVI, the last king of France, was depicted in many paintings with a "Bonnet Rouge" (Red Cap) on his head. However, what is the story of this red cap with its long apex bent over to the front, and why was it placed the head of the French constitutional monarch before he was executed?

The Prophet Idris, the second prophet mentioned in the Quran, who was a sultan and a prophet in Egypt, not only taught people Earthly sciences but also esoteric sciences. Later, he was raised to the fourth heaven, or the realm of the sun. In time, people began to worship the sun in order to commemorate this prophet who had enlightened them with his wisdom and prosperity. The sciences he had left as a legacy were defaced and came to known as Hermeticism.

In lower Egypt, a city that the Greeks called Heliopolis (City of the Sun) was established. People here worshipped the sun god, whom they named Ra. They had a goddess named Wadjet, also known as the Eye of Ra. The lion-headed Wadjet wore a red cap with a long back that represented the sun. This cap, a sign of lower Egypt, was also worn by pharaohs, who saw themselves as the sons of the sun.

This sun cult of Egypt in time spread to Iran and Anatolia. The red cap, which carries the colors of the esoteric sun or fire that illuminates the soul, became the symbol of the Hermetics. In Iran, it is rumored that Perseus, who killed Medusa, was the first to wear this headdress. Perseus was the one who brought the sciences of esoterism and magic to Iran. He had also established the faith based on Mithras, the god of light, before Zoroastrianism.

The Mithras faith, spread to Asia Minor thanks to the magi – Zoroastrian priests – who were the clergy of this belief. Attis, who was the lover of the Phrygian goddess Great Mother Cybele who sat on a lion throne in Anatolia and was the equivalent of Horus in Egypt, was again dressed in this red cap.

During the Roman period, the Romans, who had been influenced by the Iranian Zoroastrianism and Mithras beliefs, founded a secret esoteric sect with the same name. Only men were accepted into Mithraism. The order became especially popular with members of the military and slaves. Thanks to them, it spread all over the empire. Temples called Mithraea were built in the name of Mithras, or Sol Invictus ("Unconquered Sun"), the sun deity of the sect. Mithras was always depicted with a red cap in these temples, including the latest one discovered in Zerzevan Castle in southeastern Turkey's Diyarbakır.

The red cap was seen in the West as an omen of the Jews. It was also known as the Trojan or Phrygian cap as it crossed to the West via Anatolia. The center of Hermeticism in the West became Italy, especially Venice. That's why the Venetian doge's hat was designed as a Phrygian cap.

In some churches in Italy, the magi visiting the infant Jesus were depicted with this cap on their heads. It is rumored that these magi were Zoroastrians from Iran. Cosimo de' Medici, the leader of the Medici family in Florence, who was brought to power by Venice, also preferred these caps when he had the Renaissance painter Benozzo Gozzoli depict him and his family in the scene of the Biblical magi.

The influence of the Mithras belief and Zoroastrianism in Iran continued after the introduction of Islam. The famous Iranian leader of the Hermetic Assassins, Hassan Sabbah, was depicted by Westerners with this red cap. The Shiite Qizilbashs (Red Heads), who contributed to the establishment of the Safavid Dynasty, were called by this name because of this sun-colored cap they wore.

In ancient Rome, freed slaves were dressed in a white cap called a pileus. Brutus, who betrayed Caesar, chose this cap, which symbolizes freedom, as an expression of Rome's return to the republic, and engraved it on the coin he minted. But this fez, which looks like the white cap worn by Albanians today, actually had nothing to do with the red Phrygian cap.

With the American Revolution, the pileus became an omen of revolutionaries, anarchists, and republicans. It resurfaced with the protests against the Stamp Act of 1765 when Britain imposed a direct stamped paper tax on the British colonies in America.

In particular, a figure of British parliamentarian John Wilkes – nicknamed the "Devil," and known for his support of the American rebels – with this cap became very popular among the rebels known as the "Sons of Liberty."

French anarchists, who inherited this symbol from the American Revolution, preferred the Phrygian cap instead of the pileus. Thus, this red hermetic cap became the symbol of the French revolutionaries and freedom from 1789 onwards. For example, in a sculpture made by French artist Joseph Chinard in 1794, representing the revolution and the republic, a Phrygian cap was placed on the head of a woman in Roman attire.

Today, the red cap of the Hermetics is on the coat of arms of many American countries, especially Latin American nations. The seal of the United States Senate, the emblem of the U.S. Army, and the seals of six states, coat of arms of Colombia, Paraguay and Argentina are just some of them.

Finally, in the story of the red cap, one needs to mention Little Red Riding Hood, who rose from the dark belly of the wolf like a sun, Walt Disney's 1937 animation "Snow White and the Seven Dwarfs," and Papa Smurf, the leader of the smurfs in "The Smurfs" cartoons. Who knows – maybe the mushrooms in which the Smurfs live are actually psychedelic mushrooms known as liberty cap.