Artist of roses blooming in fire: Creating unique designs for over a century 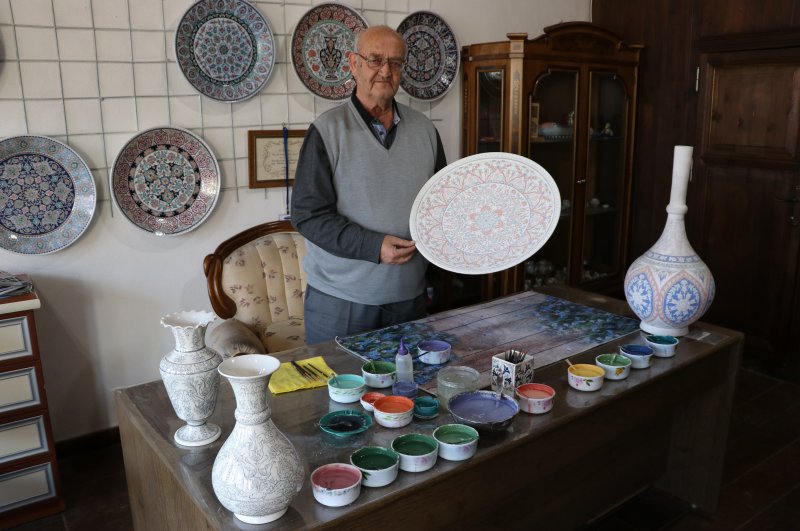 Hamza Üstünkaya poses with some of his works. (AA Photo)
by Anadolu Agency Feb 26, 2020 9:56 am
RECOMMENDED

Hamza Üstünkaya, a 73-year-old tile master from western Kütahya province who was awarded the Living Human Treasure Award by the United Nations Educational, Scientific and Cultural Organization (UNESCO), gives life to tiles with his unique designs.

Üstünkaya continues to create in his workshop in the Culture and Art House, located on Germiyan Street, known for its historic mansions in Kütahya. In an interview with Anadolu Agency (AA), Üstünkaya said that he has been working in the tile industry for more than half a century.

Indicating that he has carried the art of tile making he inherited from his father to the youngest generation, Üstünkaya stated: “I taught this art to my daughter. Our Kütahya tile has plenty of symmetry, color and pattern. There are not many people doing this kind of work today. I have been drawing original patterns for our tiles for about 33 years.”

Emphasizing that none of the patterns he draws are imitations, Üstünkaya said that the art of tile making, which he defines as “roses blooming in the fire,” is not easy.

“When you are making tiles, you are lost in thought. It is work that you enjoy while you are doing it and excites you when it comes out of the oven. Tile is a delight for the eye. Tile is also a rare object that carries the past into the future. Tile is a matter of patience. We need to contribute to the art of tile making. If we do the same tile as in the past, we are imitating it. We have to add a new take to it,” he said.

Üstünkaya noted that he began the art of tile making after the failure of the business he started on his return from military service.

Üstünkaya stated that he has led a life intertwined with the art of tile making since childhood thanks to his father, the late Hacı Mehmet Üstünkaya, adding: “I wanted to open a variety shop after I returned from the army, but it did not work out. I went to my father, who was a tile master, and I tried to learn the craft better. You see, the apple never falls far from the tree. In my learning process, I have applied relief paint to the tile,” he said.

Üstünkaya stated that God bestows everyone an artistic talent that should be discovered. Calling on young people to set their hearts on the art of tile making, Üstünkaya said: “We are here today and gone tomorrow. It is today's young tile artists who will carry this art into tomorrow. Let young people take advantage of us. This art gives people a reputation. I am making tiles to eliminate fatigue.”

Üstünkaya lastly added that the Ministry of Culture and Tourism is preparing for the publication of his book "Kütahya Patterns," which contains his own 300 tile patterns, poems and memories.