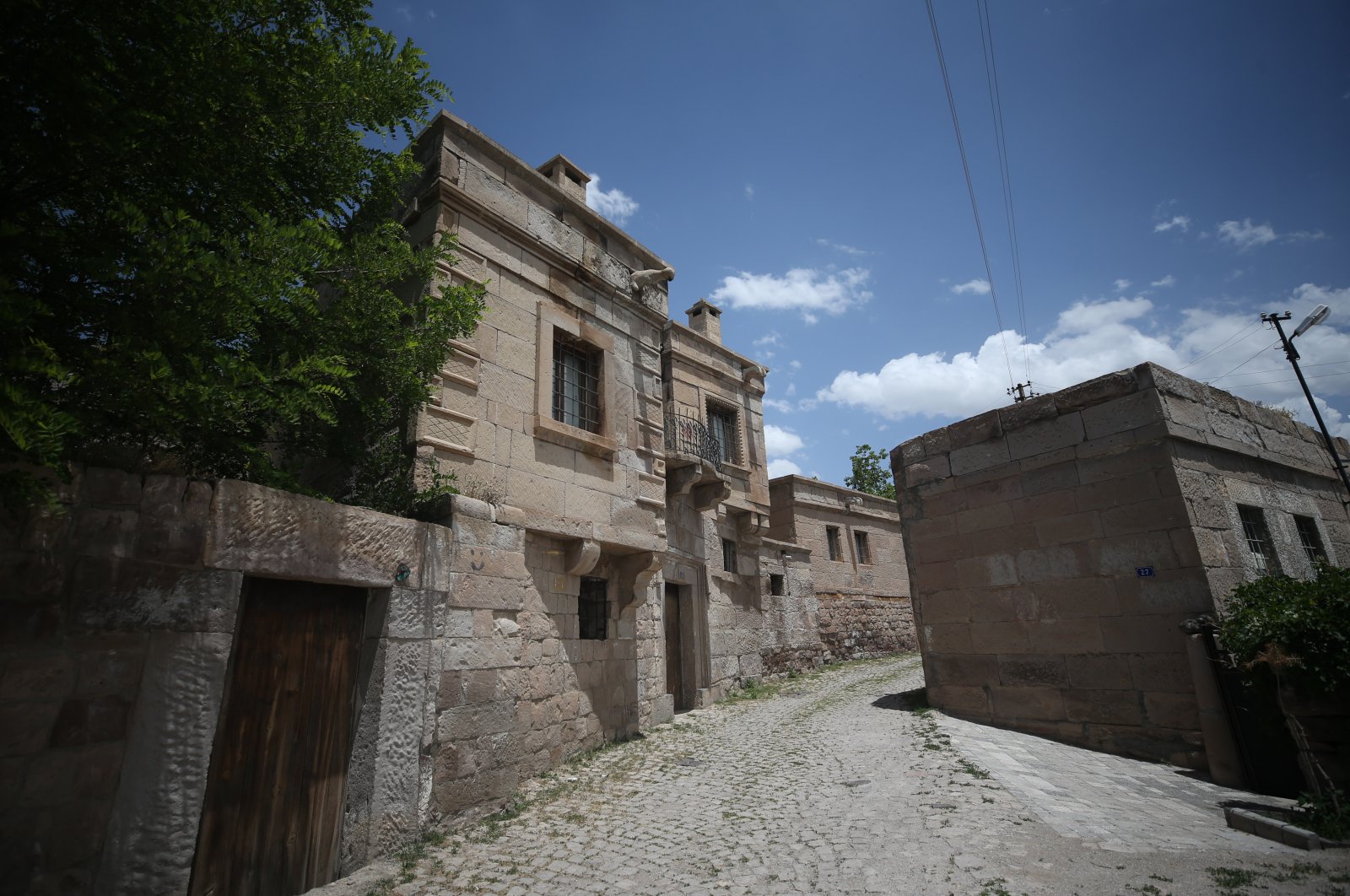 The stone houses of the neighborhood have been a beaten track for tourists recently. (AA PHOTO)
by Anadolu Agency Jun 28, 2020 1:12 pm
Edited By Irem Yaşar

The historical fabric of Ağırnas, located in the central province of Kayseri, will be brought to life as part of the renovation work carried out by Melikgazi Municipality on the birthplace of Ottoman architect Mimar Sinan. The neighborhood is located in the Koramaz Valley, which is already listed as a UNESCO World Heritage Site.

About 34 kilometers from downtown Kayseri, the Ağırnas neighborhood is home to a number of invaluable structures, such as stone houses, an underground city, linseed oil houses, a church and the former home of Mimar Sinan, a legendary architect with various impressive works across the region. The neighborhood has become a draw for domestic and foreign tourists in recent years, particularly those who want to see the latter site.

Mustafa Palancıoğlu, the mayor of Melikgazi, told Anadolu Agency (AA) that Ağırnas, located within the boundaries of the former municipality, is one of the most historical neighborhoods in the area.

Highlighting Ağırnas as the home of Mimar Sinan, one of the prominent architects not only in Turkey but in the history of the world, Palancıoğlu said: “Mimar Sinan, who has around 400 works, is referred to as a 'master architect.' Stonemasonry has an important place in Ağırnas. As Melikgazi Municipality, we carry out intensive works on the restoration, rehabilitation and maintenance of works from the Seljuk and Ottoman eras. This town where Mimar Sinan was born is a very beautiful place. With the completion of restoration works, the historical neighborhood will be a gift for tourists.”

Palancıoğlu stated that renovation works would be carried out in a way that will reflect the area's historical charm, with all concrete roads being replaced with cobblestones. On top of street works, Palancıoğlu added that they would also be renovating several grand old homes in the neighborhood, including the Çerkezoğlu Mustafa Bey Mansion. He pointed out that the building that was home to Çerkezoğlu Mustafa Bey, one of the leading figures in Kayseri during the time of national struggle, had already been restored.

Palancıoğlu emphasized that huge steps had been taken in terms of restoring historical buildings thanks to the improved economic conditions of the last 15-20 years, saying that intense demand for restorations had occurred as a result. “Many people ask whether they can buy or rent the buildings that have been restored. The aesthetics of the artifacts built in those periods attract everyone's attention. We will carry out restorations on the exteriors of nearly 100 houses we have earmarked. It is not enough to simply restore them, however. They need human breath, that is, to assume a function in order to survive. For this reason, some works should be used as cultural centers, others as libraries or boutique hotels.”

Palancıoğlu highlighted that not only the works of Mimar Sinan, but also the team he worked with, the way he worked and his family life should be explored, and said a number of studies would be launched to this end.

Recalling that Mimar Sinan only took on the architecture profession in his 40s, Palancıoğlu said: “At the age when we normally start looking forward to retirement this man started his main career. He built his most stunning works after the age of 70. Mimar Sinan conveys us the message, ‘No one should take a back seat; we can do more productive work as we get older.’”