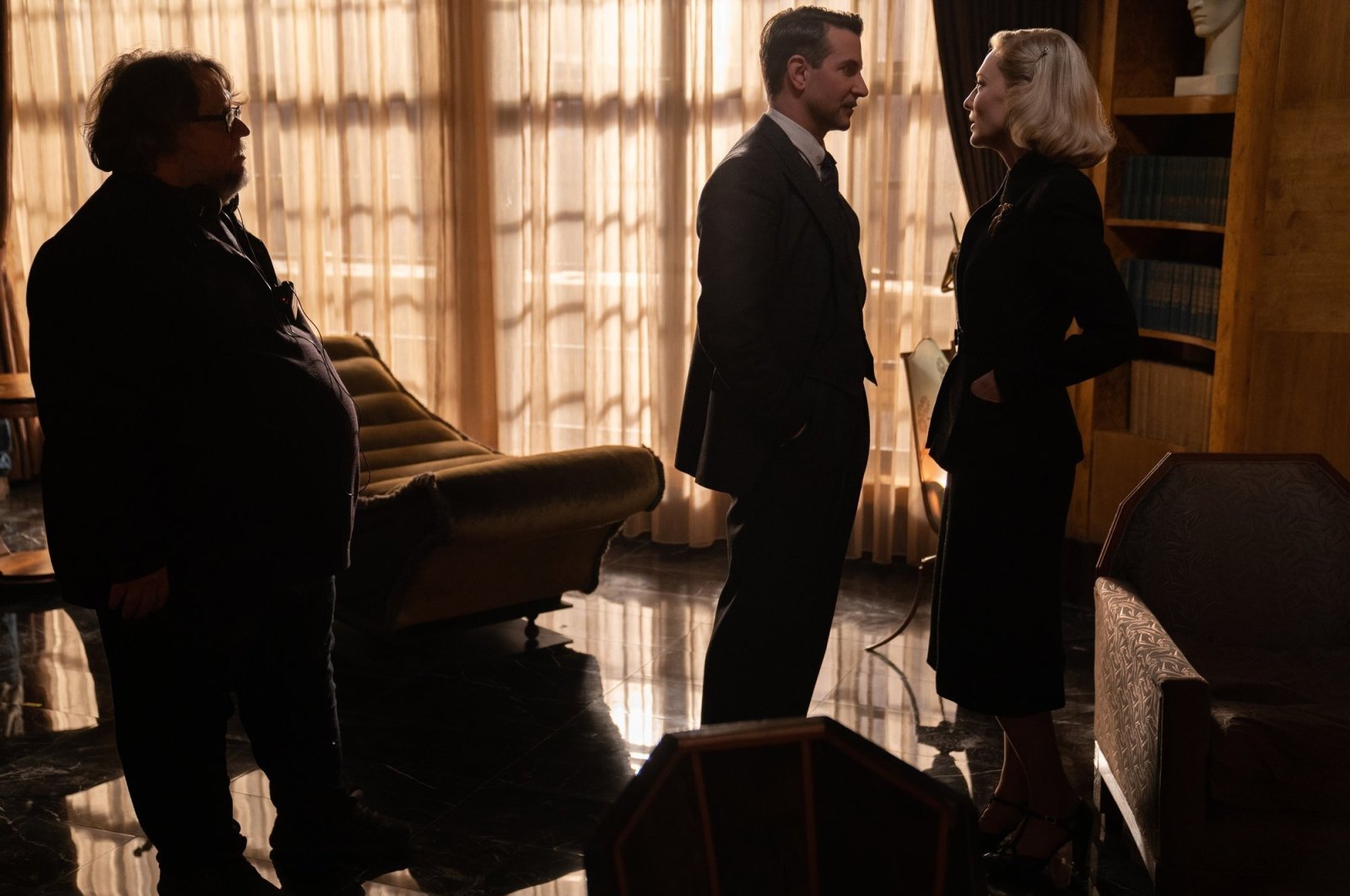 Guillermo del Toro (L), on set with actors Bradley Cooper (C) and Cate Blanchett, during the filming of "Nightmare Alley." (Searchlight Pictures via AP)
by Associated Press Dec 21, 2021 11:55 am
RECOMMENDED

A mysterious and beautiful woman charms and ensnares the man who fell for her, leading him into compromising and deadly traps. That is the description of femme fatale, an archetype of literature and art, and the incredible Cate Blanchett's character in Guillermo del Toro’s ode to film noir "Nightmare Alley" could be described as a femme fatale, but thanks to the idiosyncratic director and the enchanting actress, she becomes much more than a stereotype instead a subversion of established norms.

If "Nightmare Alley" is del Toro’s lushly composed love letter to noir, the movie’s pulpy heart is in Blanchett’s conniving psychiatrist Lilith Ritter. She doesn’t enter the film until halfway through, when Bradley Cooper’s carnival huckster, Stan, catches her eye in his nightclub mind-reading act, and the two begin scheming together. But when she does turn up, Blanchett shifts the film's fable-like frequency, conjuring deeper shades of mystery from the movie’s rich tapestry of shadow and fate.

"We tailored the part for her, but she fit in those clothes on the first try," says del Toro.

In period films like "Carol," "The Good German" and "The Aviator," Blanchett has often evoked a classical kind of mid-century movie stardom. But in "Nightmare Alley," an adaptation of the ‘40s novel first made into Edmund Golding's well-regarded 1947 film – currently streaming on the Criterion Channel – Blanchett slides into one of the movies’ most iconic types by trading less on her character’s seductiveness than on her razor-sharp intellect.

"What I thought was timely and dangerous about this story was it’s an exploration of the truth," Blanchett said in an interview from Brighton, England. "Playing such a deliberately mysterious and ambiguous character I found really challenging because you have to know there’s a lot going on, but you’re never invited into exactly what she’s thinking."

It’s one of two roles this December for Blanchett that revolve centrally around American deception and disinformation. There's "Nightmare Alley," currently in theaters, and Adam McKay’s "Don’t Look Up," which arrives Friday on Netflix. In the latter, she plays a TV morning news anchor who cheerfully steers the news away from an impending asteroid doomsday and toward lighter subjects – like the incredible handsomeness of Leonardo DiCaprio’s scientist.

There may be something timeless about Blanchett in "Nightmare Alley," but to her, both films are characterized by their timeliness.

"It was such a privilege to be on a film set in this particular point in human history," Blanchett says. "One should always be alive to the time in which what you’re making is going to be viewed. I never felt that more profoundly than making these two films."

Blanchett and del Toro had discussed various projects for years but came together for the first time on "Nightmare Alley." She also voices a role in the director’s upcoming stop-motion animated "Pinocchio" – another film about truth telling.

Del Toro, who calls his kinship with author James M. Cain "profound," had long pined to pay tribute to noir. His affection for the genre runs deep. In his previous film, the best-picture Oscar-winner "The Shape of Water," del Toro explicitly referenced Otto Preminger’s "Fallen Angel." An avid collector, del Toro calls the portrait that hangs in Preminger’s "Laura" "the one prop I would kill to own."

"I read all of (Raymond) Chandler right before I married," says del Toro. "I’m not sure why."

Del Toro scripted "Nightmare Alley" with film critic Kim Morgan, whom he wed earlier this year. His taste in noir leans toward seedy, rather than the more elegant varieties, and films that inhabit an audacious psychology.

"I like these characters, like Bette Davis in ‘Beyond the Forest,’ who are too smart for their environment," he says. "I root for them not because I think they do things that are good but because I agree that they are left without recourse in what seems like a rigged game. That’s the noir that I find interesting."

One touchstone for "Nightmare Alley" was 1949’s "Too Late for Tears," a nasty noir starring Lizabeth Scott as a housewife who finds a bag full of cash. Tasting a chance for freedom from her husband and more, Scott’s character clings to the money. Del Toro and Morgan envisioned Lilith similarly as operating within a male-controlled society.

"Frankly, it’s the character I was completely passionate about creating with Cate," he says. "She’s almost like an avenger. We said: Whatever happened to her in the past, she’s sort of righting the wrongs."

To Blanchett, the term femme fatale suggests a diabolical woman – "like a siren seeking to draw the male character onto the rocks to destroy them for no reason apart from they have diabolical urges."

Blanchett and del Toro instead played with subtle gradations in Lilith’s motives. Blanchett thought one line of dialogue was too straightforward, and del Toro agreed in cutting it. But he still quotes the speech a little ruefully: "Do you know what it is for a woman like me to grow up in a town where the smartest man is just a stupid beast?"

"Even though there’s nothing explicit that Lilith says about her background, there’s a sense that she’s damaged goods from the system, that she wants to burn down and she’s going to use Stan to do it,” says Blanchett. "Her faith in him and the men who run the system is nonexistent."