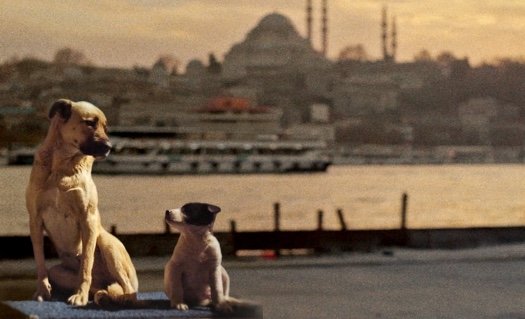 Istanbul is a metropolis filled with many wonders and surprising details. The stray dogs wandering the streets with a long past in the historic city may be the most surprising thing, especially for tourists. These well-behaved, cute animals have become the subject of a new documentary.

Zeytin likes to walk through the streets of Istanbul at night, Nazar easily befriends strangers, while Kartal lives on a construction site in the bustling Turkish city. The trio is the focus of "Stray," which depicts daily life in Istanbul through the eyes of three dogs that roam its streets, searching for food, wandering along the Bosporus and stumbling upon a women's rights march.

Inspired by her grief for her childhood pet, Hong Kong-born director Elizabeth Lo said she had wanted to make a film about dogs and was fascinated to learn of a 2004 law in Turkey that protects stray animals from cruelty and requires that they receive good treatment.

"I remember when I ... went to Istanbul and saw the way the dogs were living, where it felt like they were communally cared for and they could have these transitory friendships with all the people who were around them, I was really amazed by that," she told Reuters.

"I wanted to document that and capture that for the rest of the world to see, to sort of asking us to reconsider our relationships with other species and in particular dogs."

Lo found Zeytin, the star of "Stray," in a tunnel where she saw her running after a group of young Syrian refugees, who feature prominently in the documentary because of their relationship with the strays.

"Those were things that I was really moved by ... It felt to me like a real reflection of a primal urge that we have towards dogs and needing each other to survive in our most difficult times," she said.

Lo wore a special vest to support her camera while following the dogs as they ran around or sometimes lay down beside strangers, seemingly eavesdropping on their conversations.

"These are ... conversations about love and women, these are things that I'm personally drawn to, but it was also what Zeytin sort of happened to eavesdrop on," she said.

Asked what she had learned from making the documentary, filmed between 2017 and 2019, Lo said:

"I had assumed cities with large stray animals are inhumane or not taking care of their animals but I found that it's actually the exact opposite."

"It’s cities that don't have any stray animals that are actually betraying dogs and cats. It's because it means that you're getting rid of all of them."

Turkey is a country famed for its treatment and care of strays. In the country, many activities including a vetbüs, a mobile clinic stationed for several days in different neighborhoods, an automatic pet-food-dispensing machine that helps feed stray animals and also collects recyclable waste at the same time, and an app called SemtPati, mapping all the stray cats and dogs roaming the city’s streets to better manage the animals' health and care by assisting local administrations, have been carried out to date. Even during the pandemic lockdowns, the strays on the streets were not forgotten. Animal rights activists, together with a newly established police unit, took turns feeding the country’s smaller residents.