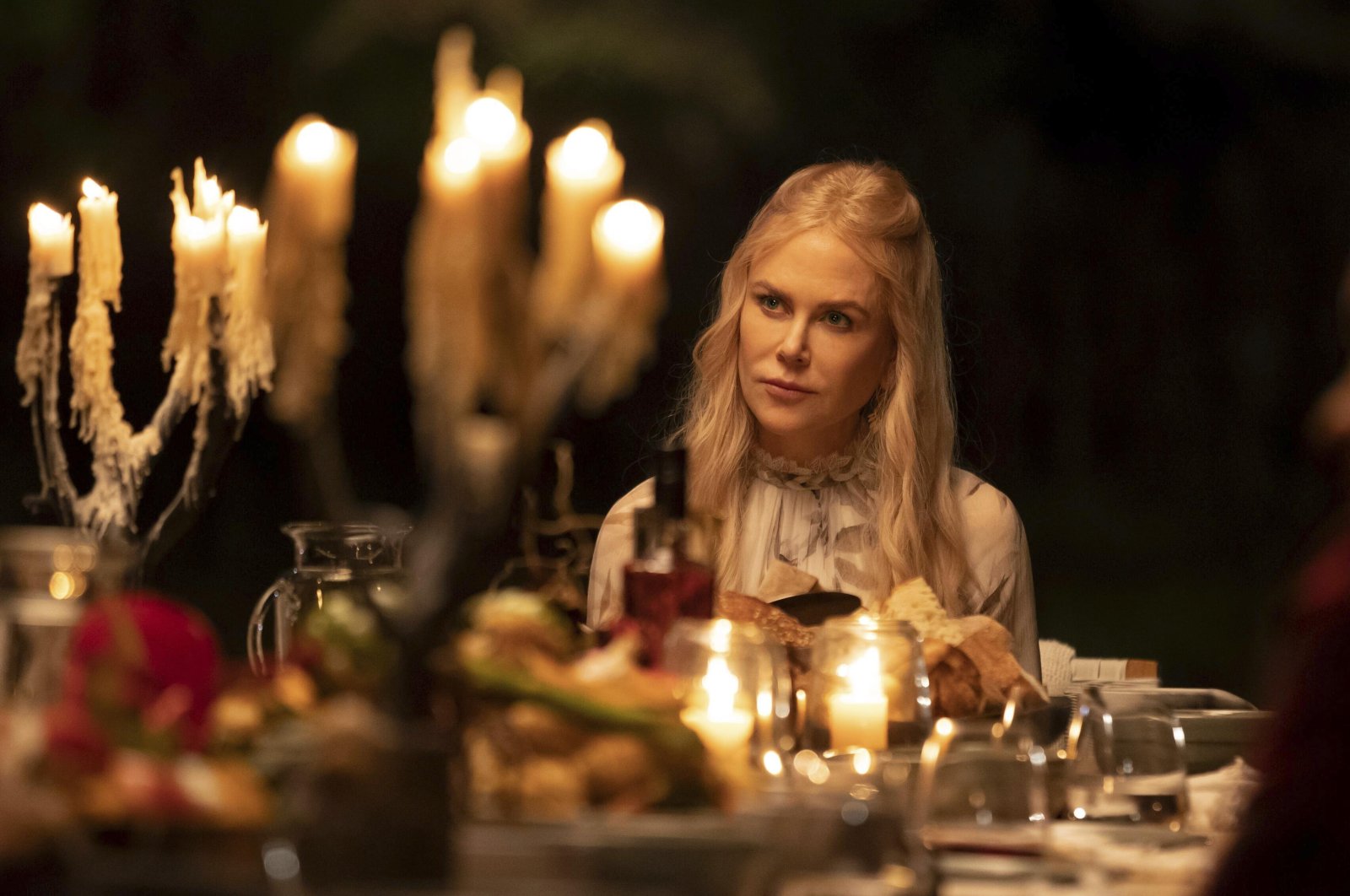 Nicole Kidman sits on a table in a scene from the series "Nine Perfect Strangers," premiering Aug. 18 on Hulu. (Hulu via AP)
by Associated Press Aug 16, 2021 7:44 pm
RECOMMENDED

Nine stressed-out perfect strangers walk into a boutique health-and-wellness resort. That is not an elaborate buildup to a punchline, but rather the premise of Hollywood darling Nicole Kidman's new, star-studded show where one is sure to find not only drama and suspense but possibly some head-scratching as well underneath the hood.

"It kind of delves into some of the biggest existentialist questions," she says. "What is reality? What place can you choose to exist in? Can we alter that? Is there another reality that we can access that maybe is a more desired reality?"

The strangers include an unhappy romance writer, a former football star, a bored couple, a simmering-with-anger divorcee, a mysterious gay man and three members of a family grieving the loss of a fourth. Their 10-day retreat is told over eight episodes – like an Agatha Christie-style parlor mystery mashed with an adult "The Breakfast Club."

The series is adapted by David E. Kelley and John Henry Butterworth from Liane Moriarty's 2018 novel of the same name. The show's cast is impressive, with Melissa McCarthy, Bobby Cannavale, Regina Hall, Samara Weaving and Michael Shannon in the ensemble.

"I loved that there were so many characters in it that I felt were so truly three-dimensional," says McCarthy, who plays the novelist. "They were complicated, and people are messy. And I thought that's how real people are. I don't know any perfect people. I wouldn't know how to play someone perfect."

Some of the issues the series deals with are addiction, the warping influence of social media, emotional suppression, imposter syndrome and the complicated nuances of mourning. The nine visitors – as well as the spa staff, including Masha – are hurting in some way.

"What would you do to take away the pain? How far would you go?" asks Kidman. "Those questions are really interesting to me, particularly when they're put in an entertaining format."

Cannavale, who plays the former football star, read the script after having just finished Michael Pollan's 2018 book "How to Change Your Mind," which explores the therapeutic potential of psychedelics. The actor jumped at the chance to show another way to treat depression.

"We've been treating people the same way for years. And we've been kind of ignoring this alternative way of treating it," he says. "Maybe people who have never heard of this go, 'Is that real?' And they'll do a little dive on their phone and go, 'Oh, my God, it is real.'"

McCarthy and Hall, who plays the repressed divorcee, both were attracted to the show's message of appreciating the messiness of life and piercing through peoples' overly processed, manufactured and edited portraits on social media.

The series arrives at an opportune time to be talking about mental health, with the lockdowns for the pandemic making depression and isolation a cultural issue, as well as the Olympics bringing mental wellness to the fore.

"I think that the last year and a half have given us wonderful opportunities of reflection and to actually sit with what we have been doing," says Hall. "In that pause, it's allowed people to say 'It's OK for me to be honest. It's OK to not be OK.' Not only is it OK to not be OK, it's OK to say I'm not OK."

While the show is set in a remote part of California, filming actually took place in the southeastern Australian coastal town of Byron Bay, this "magic bubble where there was no COVID," said McCarthy.

The Australians took COVID-19 safety very seriously, escorting the cast and their loved ones by military to hotel rooms and quarantining them for 15 days with a guard outside. Masks and tests continued on set.

"They were not kidding around. Their protocols were intense," said McCarthy, who traveled with her family. "There's nobody to clean your room. Nobody changed your sheets. You were just there and had some self reflection. We did a lot of coloring, strangely."