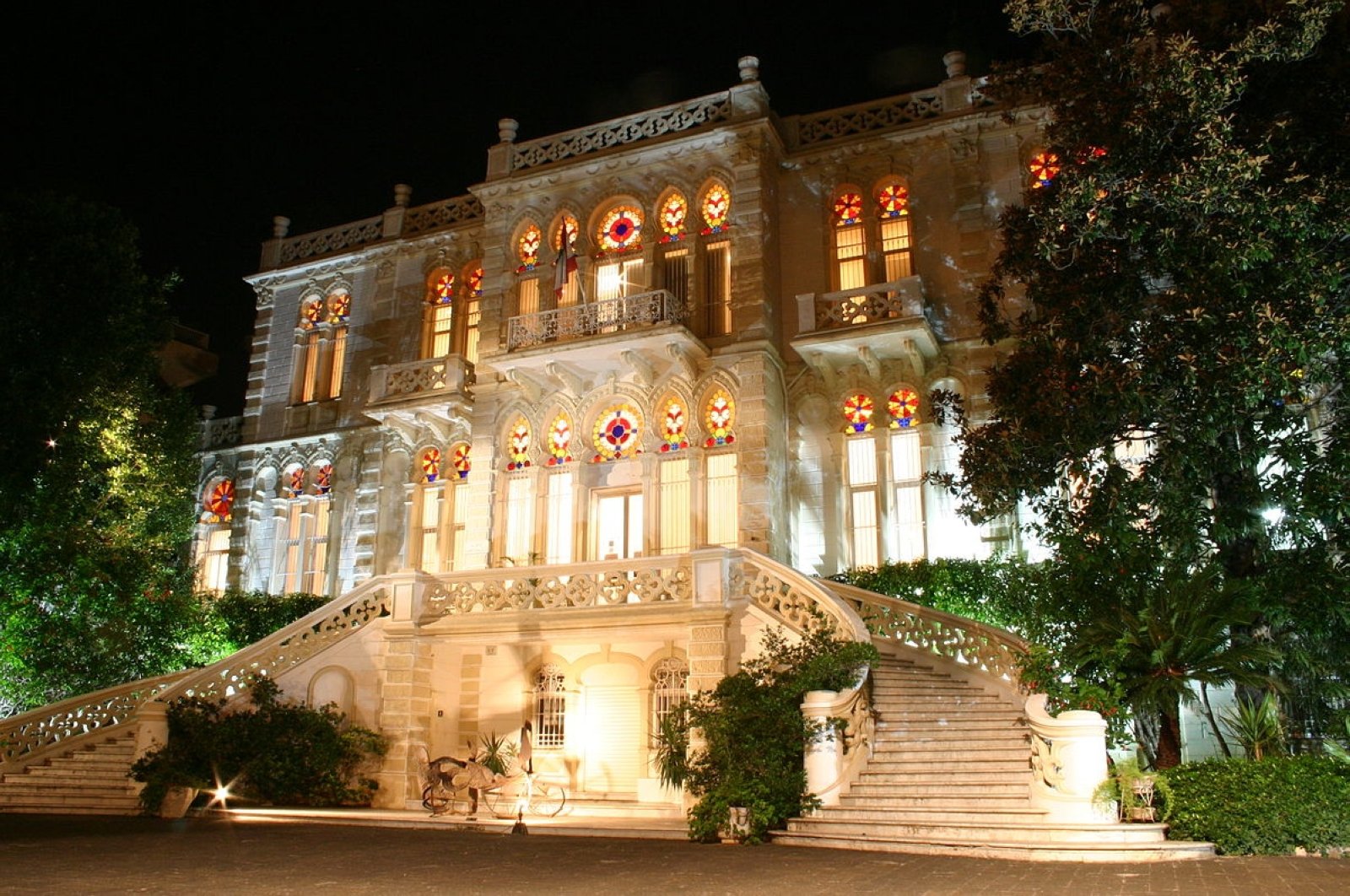 Sursock Museum is located a few kilometers from the explosion site.
by ALİ TÜFEKÇİ Aug 09, 2020 11:57 am
Edited By Irem Yaşar
RECOMMENDED

Last week saw a massive explosion in the Port of Beirut hit the global headlines. The death toll, as well as the economic damage, were indeed very serious. There were also political aspects of the issue. The incident will undoubtedly affect Lebanon and the Mediterranean in its entirety. In addition to all this political and economic chaos, however, arts and cultural venues also sustained some severe damages in the blast.

Lebanon is one of the most interesting countries in the Middle East, in terms of its geography, ethnic makeup and style of administration. The earliest inhabitants of Beirut, the central city of a region which has been a battleground among many civilizations throughout history, were the Phoenicians. It is referred to as "Biruta" in the Amarna letters, which go all the way back to the 14th century B.C., and as "Biruta" and "Birutu" in the Ugaritic texts from the 13th century B.C. This name is derived from the Akkadian word "burtu," which means "well" or "spring."

Alexander the Great put an end to the Persian rule of the city, which had been previously been presided over by Egypt and Babylon centuries before the dawn of the Common Era. Fought over by Alexander's would-be successors, Ptolemy, Seleucus and Antigonus, soon enough the Romans would arrive, reconstructing the city entirely.

Beirut came to be ruled by one Julia Augusta Felix Berytus and thus was long referred to as “Berytos” or “Berytus.” The city later passed under Eastern Roman (Byzantine) rule and has never lost its charm in the region.

With the advent of Islam, it was conquered by the Muslims during the time of Umar, the second caliph of Islam. For a short period, the Crusaders occupied the area and established feudal structures there. However, Islamic rule once more returned.

The Ottomans took control of the city from the Mamluks in 1516 with the military expedition launched by Sultan Selim I (aka Selim the Grim.) The country was administered through a native amir from among the Christian Maronites, affiliated to Damascus. These families were at odds with the Druze, a powerful community both among themselves and in the country.

In the 19th century, Egypt’s Governor Mehmed Ali Pasha invaded Lebanon, leading the Christian subjects in the country to revolt – which had a devastating impact. In 1840, the Ottomans forced the Egyptians to withdraw with the support of British and Austrian forces.

During the Ottoman period, Maronites constituted almost half of Beirut's population, the rest being Orthodox, Catholic, Sunni, Shiite and Druze. This mosaic of cultures also paved the way for many disputes.

Thinking that it had a right inherited from the Crusaders in the region, France provoked the Maronites against the Druze and the Ottomans in its own interests. In response, Britain provoked the Druze in turn. Thus, the tension between the two peoples mounted into a civil war. The Ottomans then moved in to take over the situation. A multi-sectarian administrative structure was established in the region.

France was not happy with this situation, leading to constant chaos and tension. Although it seemed things calmed down for a time, World War I soon broke out, leading to France's occupation of the region. When tension in the country increased during World War II, the people revolted. France had to withdraw, and Lebanon gained its independence. But the tension did not end here. The civil war that started in 1975 has had a lasting impact on the country.

Thus, Beirut bears the traces of ancient history, a mosaic of cultures and experiences. The artifacts in the art centers as well as historical buildings and ruins here offer us a glimpse of this colorful history.

Among the images of the extent of the damage after the blast, we also see arts and cultural centers. The remains of many galleries, museums and historical buildings can be found among the debris. Major art galleries, such as the Marfa Gallery and Galerie Tanit in the Port of Beirut, were completely destroyed in the blast. Both were the city's most vibrant cultural and artistic centers.

The Sursock Museum was one of the worst-hit. The museum, a few kilometers from the site of the explosion, was hosted at a villa built in 1912. Founded in 1960 as one of the centers of Beirut's cultural life, it was reopened in 2015 after comprehensive restoration efforts.

Zeina Arida, who was in the museum at the time of the explosion, announced it had been destroyed, but that there were no casualties or injured, according to The Art Newspaper.

"A lot of damage has been done to the structure of the building at a time when the dollar in Lebanon is so high that I don’t know how we will afford to buy new glass for the skylights, the windows and the exit doors," Arida said. She noted that they had not had the opportunity to purchase new materials and that the gallery had not sustained such damage even throughout the civil war.

As a result of coronavirus pandemic, many museums had started to put collections online. Sursock Museum in Beirut was in the midst of this digitalization process. Among the museum's contents, the Fuad Debbas Collection is one of the most important.

The collection was built up over two decades by Fouad Cesar Debbas (1930-2001) to preserve Lebanese cultural heritage. Debbas developed a passion for photographs related to the region. By the time of his death, he had collected a total of 22,000 postcards, 2,000 original printed photographs, 2,000 slides/negatives and 1,000 stereos, many letters, drawings, manuscripts and books. The collection consists of more than 30,000 items on Beirut from the 1830s to the 1960s – during and after the Ottoman rule.

Debbas not only collected concrete visual material but was also moved to find out more about the hidden stories behind each shot. He also researched the context and background of the images. All this cultural memory was bring uploaded to the database of the museum.

The most important feature of the collection was that it showed us the changes and transformations that have taken place in Beirut since the time since Ottoman rule. The collection, which forms a memory of Lebanon within the body of Beirut, was obliterated just as it was about to be made available online. This may lead to a delay in its publication considerably.

When we look at this location, we find it the site of the oldest ruins in Beirut history, the "Phoenico-Persian Quarter," 1.5 kilometers from the explosion site. We see a Crusader castle and Roman ruins in the part of the Phoenician quarter towards the port and explosion area. Also, near here, a little inside is the Archaeological Museum. These remains bear traces of ancient times in Beirut.

There are also many other places of religious significance in the blast area. The Mohammad al-Amin Mosque, located 2 kilometers from the blast area, is one of them. The mosque was built in 1853 upon the order of Ottoman Sultan Abdülmecid, on land which was gifted to Sufi Sheikh Abu Nasr al-Yaf, one of Beirut's foremost religious functionaries at the time.

Al-Yaf had established a dervish lodge on this land. The dervish lodge was severely damaged during the Lebanese Civil War (1975-1990) and it was decided to be turned into a mosque in 2002.

It was the prime minister, Rafik Hariri, who laid the first stone in the building, one of the largest mosques in Lebanon. Hariri was assassinated in 2005 before the mosque was inaugurated. The assassination trial still continues and the verdict was expected on the day of the explosion.

The true extent of damage in many other historical, religious and cultural places will become clearer over time.