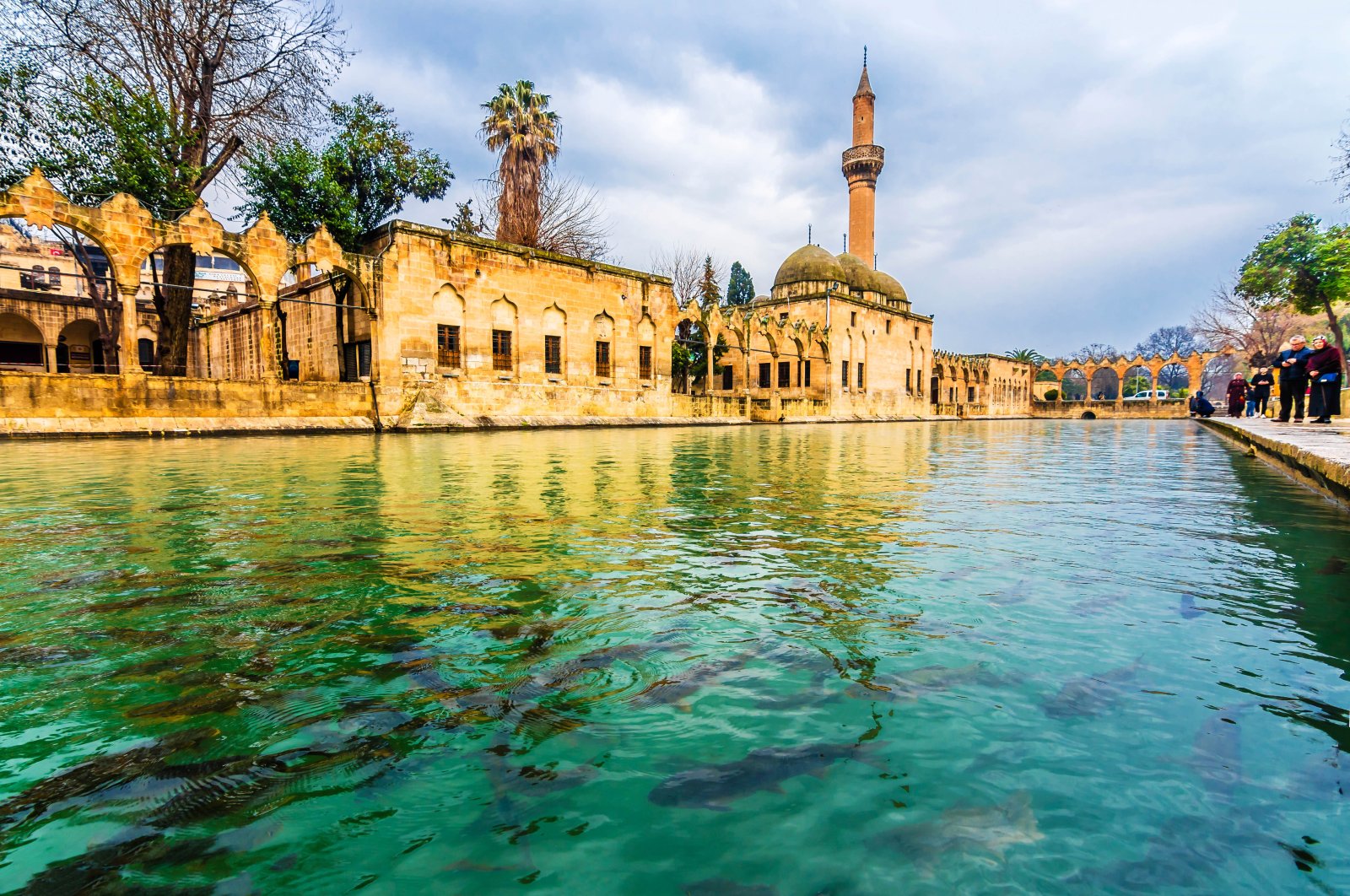 Balıklıgöl in southeastern Turkey's Şanlıurfa province has been considered sacred for thousands of years.
by DAILY SABAH May 17, 2020 2:34 pm
Edited By Irem Yaşar

In the last week of Ramadan, a different experience for Muslims this year due to the COVID-19 pandemic, you can pay a virtual visit to many sacred places

Islamic countries are welcoming a different and colorful rhythm during the holy month of Ramadan, often called the "sultan of the months," but due to the coronavirus outbreak, Muslims are unable to visit sacred sites this year. With the help of technology, however, it is possible to go on a virtual journey to these places – from the Kaaba, the holiest place for Muslims at the center of Islam's most important mosque, to Al-Masjid an-Nabawi, a mosque established and built by the Islamic prophet Muhammad, and from Al-Aqsa Mosque, located in the Old City of Jerusalem and regarded as the third holiest site in Islam, to Balıklıgöl, believed to be the place where Nimrod threw the Prophet Abraham into a fire in Şanlıurfa.

One can visit the Kaaba and the Great Mosque of Mecca, commonly known as al-Masjid al-Ḥaram, that surrounds the Kaaba in Mecca, with a virtual tour. All the details of the Kaaba, the place Muslims visit during the ritual pilgrimages of the Ḥajj and umrah, which they circumambulate around seven times, and the walk between Safa and Marwa, two small hills now located in the Great Mosque of Mecca, are available to take you on a spiritual journey with the help of technology.

Al-Masjid an-Nabawi is the second holiest Muslim mosque after Masjid al-Ḥaram and is located in Medina. This sacred structure was built by the Prophet Muhammad and his companions who settled in Medina after the Hegira, their migration from Mecca in 622. Its name means "Prophet's Mosque" in Arabic. To make your own journey to Medina, also part of the ritual pilgrimage of the Ḥajj, one must only sit back and enjoy the virtual odyssey.

Believed to be the first qibla (the direction Muslims face for prayer), Al-Aqsa Mosque was built near the Dome of the Rock (Qubbat al-Sakhra in Arabic). It is located in an area called al-Haram al-Sharif (The Noble Sanctuary) in the Old City area of Jerusalem. You can perform your prayers during your virtual visit to the temple, where Muslims prayed for about 16 months after Israʾ and Miʿraj, the two parts of the physical and spiritual night journey the Prophet Muhammad undertook when Archangel Gabriel took him from Mecca to Al-Aqsa Mosque in Jerusalem before he went to heaven where he spoke to God.

You can take on a virtual journey from your home to Jabal an-Nour, which houses the Cave of Hira, believed to be the place where Prophet Muhammad received his first revelation from the Angel Gabriel.

According to Islamic legends, King Nimrod ordered that his adopted son, Prophet Abraham, be thrown into fire on the grounds that he broke idols. It is believed that a huge blaze was set in the place where the lake is located today, and Prophet Abraham was thrown down from Şanlıurfa Castle. At that moment, the fire turned into a lake and the woods into fish. For thousands of years, this lake and its fish are considered sacred in southeastern Turkey's Şanlıurfa province. A magical journey to this legend is just a click away.

Mevlana Jalaladdin Rumi, one of Islam's most important thinkers, spoke from Konya to the world with poems full of love and respect. His approach is still admired today, and his works have been translated into dozens of languages. You can take a virtual journey to Mevlana's eternal resting place in central Turkey's Konya province, which has been converted into a museum.

The Shrine of Imam Ali is located in Najaf, Iraq, which houses the burial site of Ali, the son-in-law of the Prophet Muhammad, the son of his uncle, and the fourth caliph. You can visit this holy site, which also hosts the tombs of the Prophet Adam, Eve and the Prophet Noah.

You can also visit the Eyüp Sultan Mosque, one of the holiest places in Istanbul, in a virtual environment. In the garden of the mosque, there is the tomb of Abu Ayyub al-Ansari, one of the first Muslims who hosted the Prophet Muhammad at his home and fought by his side. It is known that the Ottoman sultans used to visit and gird on this holy shrine before setting out on a military campaign.

A virtual visit to Selimiye Mosque, a unique work that the imperial architect Mimar Sinan called his "masterpiece,” in the Turkish border city of Edirne, is now possible during the month of Ramadan. You can see the courtyard, the tiles and all the details in the mosque as if you were really there. In fact, while going on a virtual journey to Edirne, you can also visit the Complex of Sultan Bayezid II Health Museum.

The first mosque in Turkey with six minarets, the Sultanahmet Mosque, is one of the landmarks of Istanbul. It's also known as the Blue Mosque worldwide due to over 20,000 Iznik tiles used in its construction. You can see both the outer courtyard of the mosque and all the indoor details on its virtual tour.

Construction of the Divriği Great Mosque in the central city of Sivas, which is included in the UNESCO World Heritage List, started in 1228. The mosque was built by Mengüjekid Amir Ahmed Shah, while the adjoining medical center was commissioned by his wife Turan Melik. The mosque comes to the fore with its door, reliefs and stonework in its columns. You can travel to the world-famous Divrigi Great Mosque without leaving your home.

The Great Mosque, one of the historical symbols of western Bursa province, was built by Bayezid I in 1400. The mosque is a must-see with its wooden-carved fountain and 20 domed structures. You can visit this historical mosque in Bursa, which was once the capital of the Ottoman Empire, in a virtual environment.

The mosque, which was commissioned by Suleiman the Magnificent and designed by Sinan in the most majestic years of the Ottoman Empire, was completed in only seven years. Its tiles, acoustics and lighting enabled by its 32 windows are the most important details that make this historical building special. It also has four minarets since Suleiman the Magnificent was the fourth Sultan after the conquest of Istanbul and 10 balconies (şerefe) since he was the 10th Ottoman sultan. Take a virtual journey toward the mystical world of this historical structure.