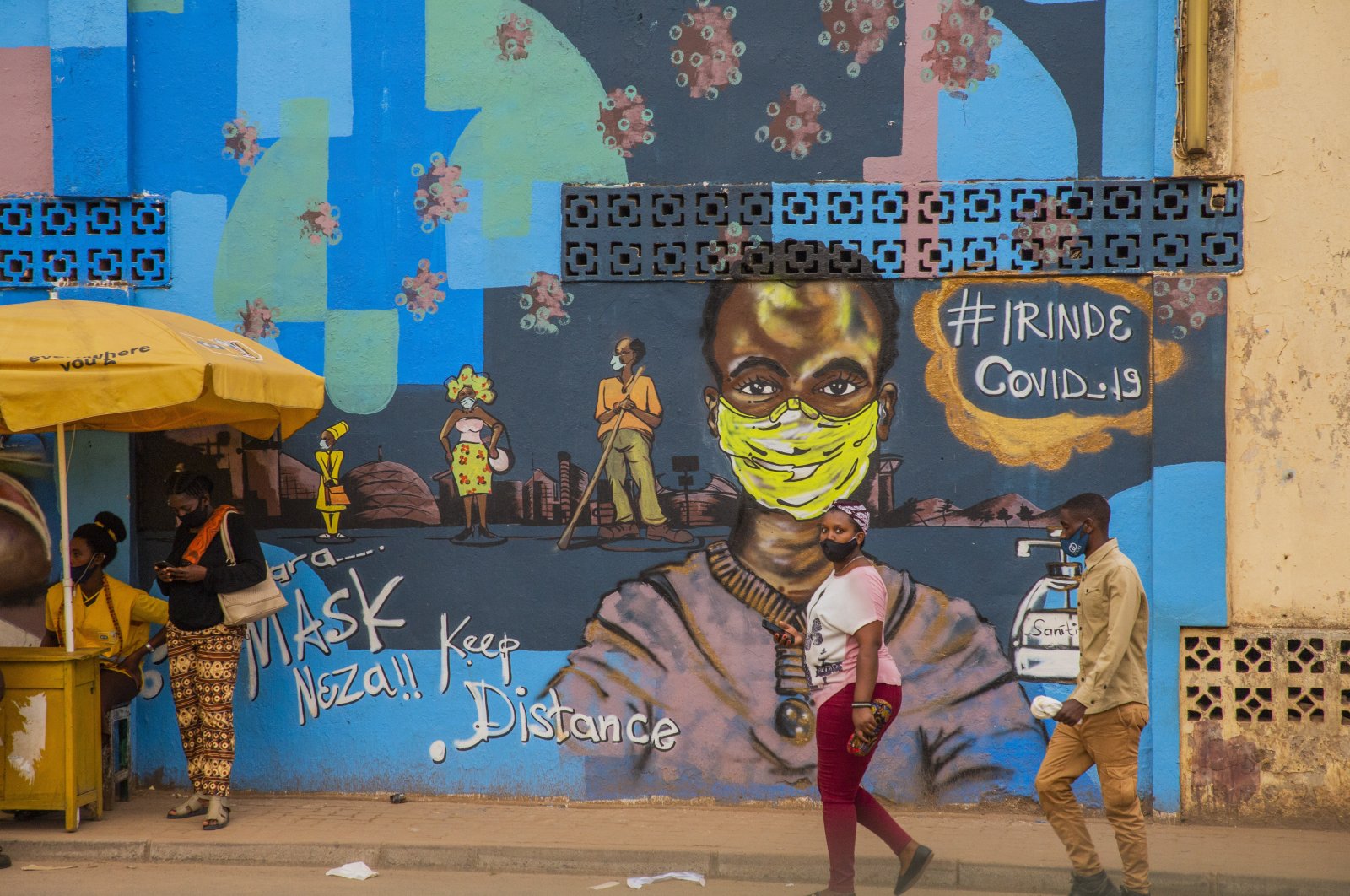 Apart from deploying drones, vans mounted with loudspeakers and arresting violators, the African country Rwanda has turned to artists to create awareness about health protocols to stem the spread of COVID-19. A group of 14 artists has launched a project called “Kurema Kureba Kwiga” (“To Create, To See, To Learn”), for designing creative themes to inspire positive behavioral changes among the people.

Forcing people to wear masks has become a challenge for authorities, as it is a new concept and some people complain of breathing issues. The country has so far reported 4,468 COVID-19 cases with 21 deaths, according to U.S.-based Johns Hopkins University's Coronavirus Resource Center.

The artists wake up every morning to work on painting a series of new murals across the Rwandan capital Kigali. Speaking to Anadolu Agency (AA), Judith Kaine, who initiated the project, said the idea was to integrate art with public safety messaging.

"The participating artists think this is their contribution to Rwanda's fight against COVID-19, recognizing that art is a powerful mode of communication. We hope that the message can sink in among residents to adopt handwashing, sanitizing and proper wearing of masks as a daily norm," she said.

A bright color mural erected on a 15-meter (49.2-foot) wall opposite Remera Taxi Park depicts people of different walks of life wearing masks at work and public places. Designed by two artists, Innocent Kagabo and Bonfils Ngabonziza, the painting reminds people to come outdoors only after putting on their masks. "Such images are a direct reminder to us to stay safe. The works speak louder with those colors," said John Mugabo, a Kigali resident.

Another artist, Jim Rolland, is blending culture and safety in his creative works to combat the pandemic. He was found putting the final touches on his mural opposite cafe Rwampara in the Gikondo area, a Kigali city suburb. He said he chose culture as his subject because some Rwandans cite local customs as an excuse for not putting on masks. "I want people to accept the mask and to show that it is for our safety and is not a bad thing at all. People should know that wearing a mask has nothing to do with one's culture," Rolland said.

The artist uses common forms of Rwandan art designs, which he said are important to remind people that coronavirus affects the whole community. "I am using shouting colors to draw attention. My message is to show citizens basic protective measures they should take to protect themselves and others," he added.

Rwanda Health Communication Manager Malick Kayumba said they are looking at different ways to explain the messaging to prevent more infections, especially to the youth since they are a more exposed age group. “Art is a tool to encourage behavioral changes because it continuously reminds us every day whenever we look at the murals. It is different from reading or listening to a news story video or an advertisement," he said.

A recent spike in coronavirus cases in the country, especially in the capital, was attributed to laxity in observing prevention measures.

The Health Ministry in its assessment said that many market vendors were less mindful of proper face mask usage, social distancing measures and routine handwashing.

According to official figures, over 15,000 people were arrested for violating restrictions within three days between Aug. 27 and Aug. 29. Another 4,000 were arrested for not wearing face masks, while 3,700 were apprehended for not observing social distancing.

On Aug. 1, Rwanda reopened its airports to commercial flights more than four months after they were closed due to the outbreak of a pandemic. Schools and its land borders, however, remain closed except for cargo trucks.

On Aug.10, the World Health Organization (WHO) Director-General Tedros Ghebreyesus said some countries, including Rwanda, were able to suppress the virus early.