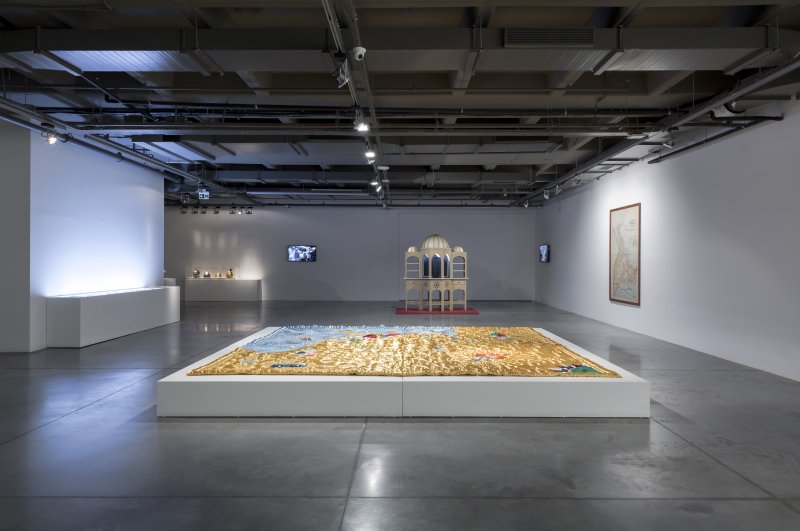 Servet Koçyiğit's quilt and Randi & Katrine's Turkish bath model are on display side by side in the exhibition space. (Courtesy of Istanbul Modern)
by DAILY SABAH
Feb 28, 2020 1:47 pm

Guest artists of the Istanbul Modern’s International Program met with the masters of many crafts, from wood carving to carpet weaving, and produced artifacts to promote the visibility of Istanbul on a global scale

As part of the International Guest Artist Program, supported by the Istanbul Development Agency (ISTKA) under its Innovative and Creative Istanbul Support Program, artists from all over the world met with artisans in Istanbul for the first time under the roof of a museum in Turkey. “Guests: Artists and Craftspeople,” the first exhibition of Istanbul Modern’s project that contributes to the international promotion of Turkey, kicked off on Wednesday. The exhibition invites the audience to think about Istanbul's well-established history of craftsmanship in a contemporary attitude. The “Guests: Artists and Craftspeople” exhibition showcases the works of 10 international artists and their skillful craftsmanship in Istanbul.

From Baku to London

The artists whose works are featured in the exhibition, curated by Öykü Özsoy and Ümit Mesci from Istanbul Modern's curatorial team, either focus on the subjects of craftsmanship and tradition in their production processes or carry out their work with different materials and techniques. In addition to the new works produced, the exhibition also provides information about the artists' research and production processes in Istanbul, the sources they interacted with and were inspired by, and the artisans they worked with in the city.

“Guests: Artists and Craftspeople” offers the works of artists who interpreted traditional production techniques from a contemporary perspective, as well as historical artifacts that have been borrowed from Istanbul Harbiye Military Museum and Istanbul Metropolitan Municipality Directorate of Libraries and Museums Collection and that shed light on the cultural richness of Istanbul.

Videos documenting the different stages of the International Guest Artist Program make the background of the project visible in the exhibition, as well. The artists' research trips and production processes, which they conducted together with various craftsmen, are presented to visitors through video interviews. In this context, the craftsmanship workshops that still exist in the city center of Istanbul and other players that support the continuity of this production culture have interacted with visitors at Istanbul Modern. The exhibition is open until Aug. 23.

The Artist Program hosts artists who have attended international biennials and exhibitions and presented their works in the collections of prominent museums and art institutions around the world. Among them are Faig Ahmed, Rana Begum, Benji Boyadgian, Rodrigo Hernandez, Servet Koçyiğit, Outi Pieski, Randi & Katrine, Wael Shawky and Jorinde Voigt.

Ahmed lives and works in Azerbaijan, where he was born in 1982. During his visits to Istanbul as part of the International Guest Artist Program, Ahmed focused on the richness of expression of the geography of Turkey in addition to his research on patterns and techniques unique to Istanbul. The artist decided to work on silk carpet weaving and concentrated on the search for a method that he could combine with the wool carpet weaving technique he had pursued in Azerbaijan. At the beginning of his stay in Istanbul, he focused on traditional and contemporary weaving produced in different parts of Turkey, which have technical qualities similar to those in Azerbaijan. As a result of his research, he decided to integrate silk and wool carpet techniques, and one of the most important details in his production process became the density of weaving. The necessity of combining silk carpet woven with finer threads and wool carpet woven with thicker threads in a single carpet is one of the defining elements of the production process. The artist decided to produce a carpet with a density of 49 knots per square centimeter, where both techniques could meet on silk warps.

Begum, who lives and works in London, studied various kinds of craftsmanship in Istanbul as part of the International Guest Artist Program and explored workshops that work with traditional production techniques in the historical peninsula, as well as the techniques used in metal workshops clustered in Galata and Şişhane neighborhoods. With a special interest in the architectural fabric of the city, the artist visited the historic and contemporary buildings that make up the city's skyline. The architectural and visual qualities of Istanbul were the source of inspiration for Begum's work in this program. Begum addressed the patterns of different sizes and forms she encountered in the metal plastering workshop as materials depicting monumental and exemplary buildings of a period, such as Hagia Sophia, Topkapı Palace, the Haydarpaşa and Sirkeci train stations and the city walls, which form the historical urban fabric of Istanbul. The artist often used industrial materials and sharp geometric and colorful metal surfaces in her sculptures and installations. She was impressed by the similarity of the patterns she encountered in the workshop of metal spinning master Lokman Çekingir with the formal and visual elements that make up Istanbul’s skyline. Using these patterns, the artist produced the metal forms she used in her work and finished her work by painting with colors that she associates with the identity of Istanbul.

Boyadgian continues his studies in Jerusalem, the city where he was born in 1983. While tracking the craftspeople in the center of Istanbul as part of the International Guest Artist Program, he was fed with different stories from the city, which he had visited before. During his stay in Istanbul, Boyadgian's research process was shaped by the issues he dealt with based on his own life story. Although he did not feature it directly in his works, the concept of identity, which is often discussed in Istanbul and in the region where the city is located, proved decisive. Not only works on historical events but also subjects such as literature and craftsmanship fed the artist's research process. Characters borrowed from daily life in the shadow play – as well as the fictional character Agop Saatçiyan in Ahmet Hamdi Tanpınar's “The Time Regulation Institute” (1961) – enabled the artist to explore the society in all its complexity. Boyadgian designed the sculpture's mirror system to give viewers encounters with themselves and others. The work that the artist designed using craftmanship culture as a tool can be described as a device in which he outlined the process with which he established a relationship with the city.

Hernandez was born in Mexico City in 1983. He began his education at La Esmeralda in the Mexican capital and continued at the Karlsruhe Academy of Arts in Germany and at the Jan Van Eyck Academy in Maastricht, Netherlands. The artist bases his work on the simplification of content and process in the production of art. At the beginning of his research process, Hernandez focused on the Alexandrian poet Konstantinos Kavafis (1863-1933), whose parents were from Istanbul.

Born in 1971, Koçyiğit studied visual arts at the Gerrit Rietveld Academy in Amsterdam. Koçyiğit has benefited from the guidance of different craftspeople while reinforcing her acquaintance with Istanbul within the scope of the International Guest Artist Program. Koçyiğit decided to work on quilting and integrated the tradition of embroidery into her craft to produce four quilts, each 210 x 180 centimeters in size. The images drawn by the artist were integrated into the quilts with the Chinese needle technique by a team led by Özgü Karcı, who used several different embroidery techniques. When the quilts came together, they were designed to create an imaginary map, showcasing the different works of the artist. During the last phase of production, Koçyiğit completed his work together with Abdullah Karahan, who had been working in the Fatih district as a quilt maker for 50 years.

Born in Helsinki in 1973, Pieski lives and works in Utsjoki and Numminen in Finland. Pieski decided to work on block printing, which is a handicraft she studied in Istanbul as part of the International Guest Artist Program. While tracing the patterns used in the region of Turkey, she found similarities with goddess motifs in the Sami culture. While applying classical patterns used in block printing on fabrics of different colors along with block printing master Veliye Martı and her assistants, she mastered the particulars of this craft. The artist then completed the printing process with patterns formatted with eli belinde (hands-on-hips) and Sami goddess motifs produced for her project by wood carving.

The artist duo Randi Jorgensen, 46, and Katrine Malinovsky, 44 – known as Randi & Katrine – have been working together in Copenhagen since 2004. During their visit to Istanbul as part of the International Guest Artist Program, the duo examined the working styles of different craftspeople, as well as workshops hosting production techniques they usually work with, such as wood lathe and carpentry. They addressed birdhouses in Istanbul as a small-scale reflection of Ottoman architecture, as well as a rich visual repertoire with some details inspired by different regions. During their focus on the element of water, the duo examined Turkish baths, one of the most important elements in Istanbul's cultural history. The structural features of the baths, as well as the traditions of usage that continue to be practiced today, were among the topics examined by the artists. During the production process, Randi & Katrine decided to work with carpenter Gökmen Uzun, who has a workshop in Kağıthane district. The artist duo shaped the final version of the work they designed in their workshop in Copenhagen, with the craftspeople focusing on the details in Istanbul.

Shawky, born in Egypt in 1971, is an artist familiar with Istanbul’s production culture due to his participation in three Istanbul biennials in 2005, 2011 and 2015. Shawky intended to develop his research for new works, which he planned to use in his new film, “The Gulf Project Camp,” which he is currently working on, as part of the International Guest Artist Program. During his research trip, Shawky spent time in the traditional craft workshops at Büyük Yeni Han, met the craftspeople and learned about their production techniques, and carried out research on Ottoman and European helmets in the helmet collection of the Military Museum of Harbiye. He collected information about the production techniques, marquetry and ornamentation features and historical development of various helmets. He decided to produce a hybrid helmet that combines the form of a 16th-century European helmet with the ornamental features of Turkish-type helmets dating back to the same century. The artist started working with Zeki Topbaş, a master of metal hammering who had a workshop in Büyük Yeni Inn, and placed an imaginary tumbledown castle on top of the helmet in the drawings he laid out for this work. The castle was modeled by Istanbul Modern Education Expert and sculptor Betina Hobeş.

Born in 1977 in Germany, Voigt lives and works in Berlin. Visiting Istanbul many times as part of the International Guest Artist Program, the artist was fed from the city's deep-rooted history of craftsmanship and studied techniques in which she could interact with her own art practice. Voigt decided to shape the first work of her new series of soft sculptures in Istanbul. Dividing the European and Asian sides of the city, the Bosporus was one of the natural elements that the artist planned to address as a waterway. The artist also addressed Istanbul's trees and vegetation in her research. Thinking about methods of transforming by abstracting the elements she was researching, Voigt focused on how she could design these processes through different craftmanship. She addressed craftmanship such as glassblowing, carpet, delphinium knitting pattern, metal plastering and jewelry within this scope. During the production process, the artist decided to abstract a bunch of lilies as a soft sculptural installation, forming her work together with upholstery master Abdullah Doğan.