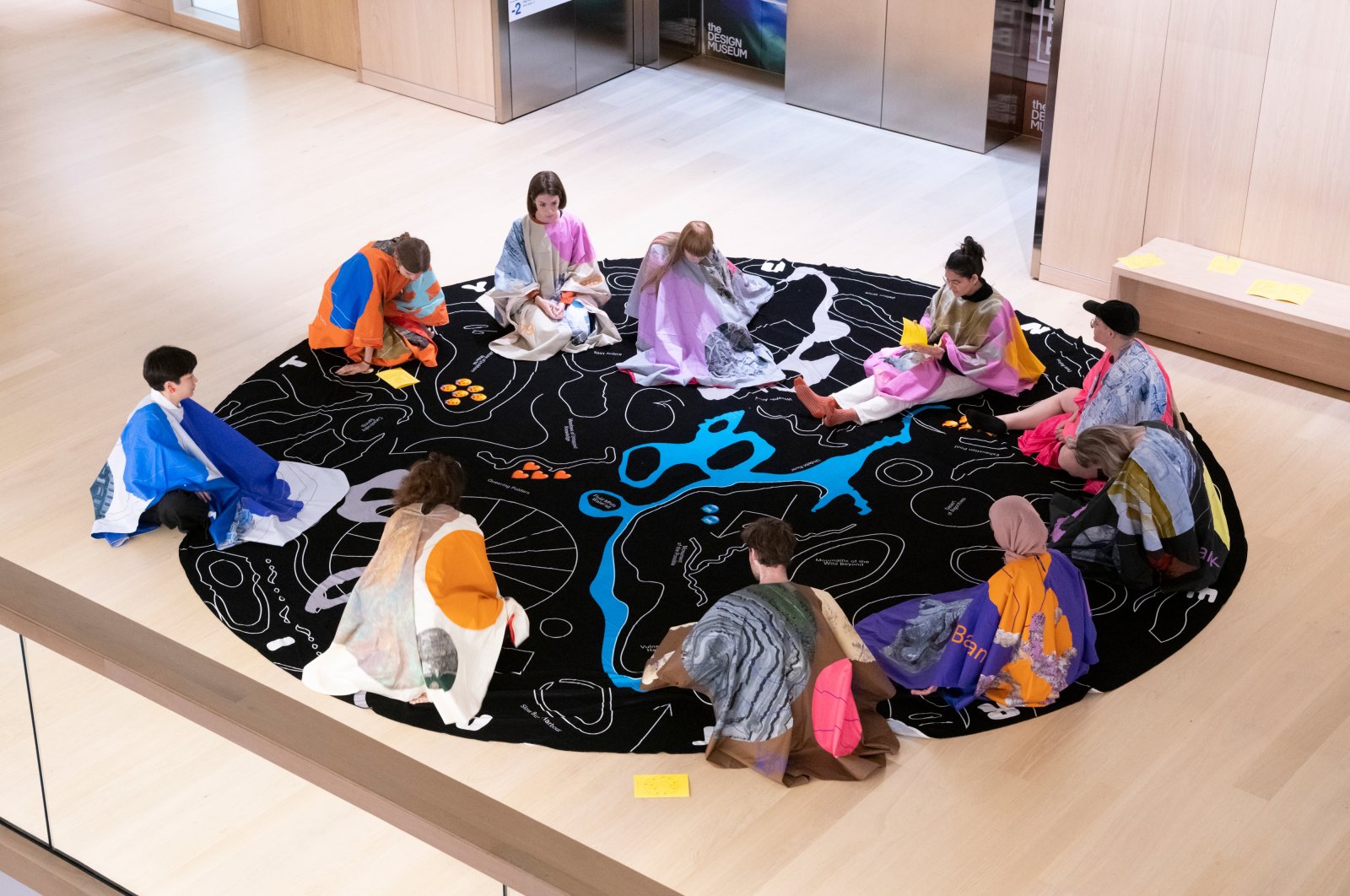 "The Map of Empathic Society" by The Rodina is one of the projects to take place at the fifth Istanbul Design Biennial.
by DAILY SABAH
Oct 04, 2020 1:04 pm

The 5th Istanbul Design Biennial takes empathy back to its roots to explore how design might equip us to feel into territories, landscapes, microorganisms, other species and also one another

Organized by the Istanbul Foundation for Culture and Arts (IKSV) and supported by the Ministry of Culture and Tourism, the fifth Istanbul Design Biennial will debut on Oct. 15. Titled "Empathy Revisited: designs for more than one,” this year's biennial was curated by architect Mariana Pestana and will showcase the works of participants from different countries and disciplines over six months across different parts of the city in exhibition spaces, the streets of Istanbul and also the digital arena.

While the archives at the Pera Museum and the research projects at ARK Kültür gallery will only be available until Nov. 15, the video project street installation series across the city will continue through to April 30, 2021 as well as digital and research projects hosted online.

Empathy is a trait we tend to associate between people, but looking at the etymology of the word, historically, it is a sentiment that can be felt for objects and natural life too. The fifth Istanbul Design Biennial asks the contributors to create designs that act as an intermediary between artwork and feelings and emotions, particularly "empathy." Designers are careful and precise in the way they convey their messages, some using it as a form of healing, with the ultimate aim of not just uniting people but rather uniting us with everything the world encompasses: other species, microorganisms, soil, water and the whole universe we share.

The fifth Istanbul Design Biennial wants to create a space where the principles of responsibility and developing compassion for the "more-than-human" can be taught. The exhibited projects encourage the viewer to rethink what it means to care and be a good citizen in these challenging times and hopes to build new systems for reconnection in the face of that. The biennial offers critical tools and alternative solutions to real problems including climate change, economic crises, social deprivation and the crumbling global industrial model. The event will showcase not just the completed projects but also will highlight the complexities of the design process in of itself.

The biennial's program consists of three parts: a video series entitled “Critical Cooking Show” to be published in digital media, the “Library of Land and Sea Program” that will bring together projects from the Mediterranean basin at ARK Kültür in the historical neighborhood of Cihangir and a series of interpretations called “New Civic Rituals,” where projects revising coexistence will extend to different parts of the city as well as the Pera Museum.

The biennial's "Critical Cooking Show" is a weekly video series with each episode hosted by a different practitioner or thinker who will discuss the effect food shopping, supply and consumption has on today's ecological, economic and geopolitical conditions. The videos explore a range of topics from microbes in the kitchen to landscapes changed by agriculture and offer complex perspectives on food as a form of design.

The episodes will be shared on the Istanbul Design Biennial website, IKSV YouTube channel and e-ﬂux Architecture. An episode will be broadcast every week between Oct.18, 2020, and Feb. 28, 2021.

Library of Land and Sea Program: A selection of projects by designers and thinkers researching in the Mediterranean basin to create new tools and systems for economic and environmental resistance in the region is being exhibited at ARK Kültür under the name of the “Library of Land and Sea.” Driven by research, care and activism: these practices use design to rethink realms of authority in light of the relationship we have established with land and water, drawing attention to less visible networks of food production.

These artistic interventions will be a widespread project taking place across the city hosted by different communities in a series of events. These restorative works, ranging from common cooking utensils to full-scale gardens and playgrounds, aim to offer experiences that promote safe coexistence, caring for the community and reconnection. The projects, which can be found at the Pera Museum and spread across the city streets, utilize birds, plants, stars, people and microorganisms alike to demonstrate the interactions of different beings at different scales.

This program is carried out in conjunction with the Young Curators Group, which as the name suggests consists of young curators living in Istanbul and the group brings these interventions to life through designed meals, events and public debates. The Young Curators Group, a part of the curatorial team of the fifth Istanbul Design Biennial, consists of Nur Horsanalı, Ulya Soley and Eylül Şensesyer. The projects will be exhibited in Kalamış Park, Moda Park, Fenerbahçe Park Community Garden, Kuzguncuk City Garden and Kuzguncuk Ferry Bridge on the Anatolian side; and at Beşiktaş Ferry Bridge, Karaköy Ferry Bridge and Pera Museum on the European side. Detailed information about the installation dates of the projects is available on the website of the Istanbul Design Biennial.

In addition to these projects, the biennial will feature film screenings that expand the concept of empathy under the name the "Empathy Sessions." A podcast series, "Design Biennial Talks" organized by the Istanbul Design Biennial and sponsored by VitrA, will be available on IKSV's Spotify and Apple Podcasts.

The podcast, moderated by the biennial team, will host discussions between curators and previous participants about this year's theme and projects. The show will feature Zoë Ryan, Jan Boelen, Vera Sacchetti, Nadine Botha, Orkan Telhan, Judith Seng, Camilo Oliveira and Emre Arolat among others.