On paper and surfaces: The art of Aslı Smith 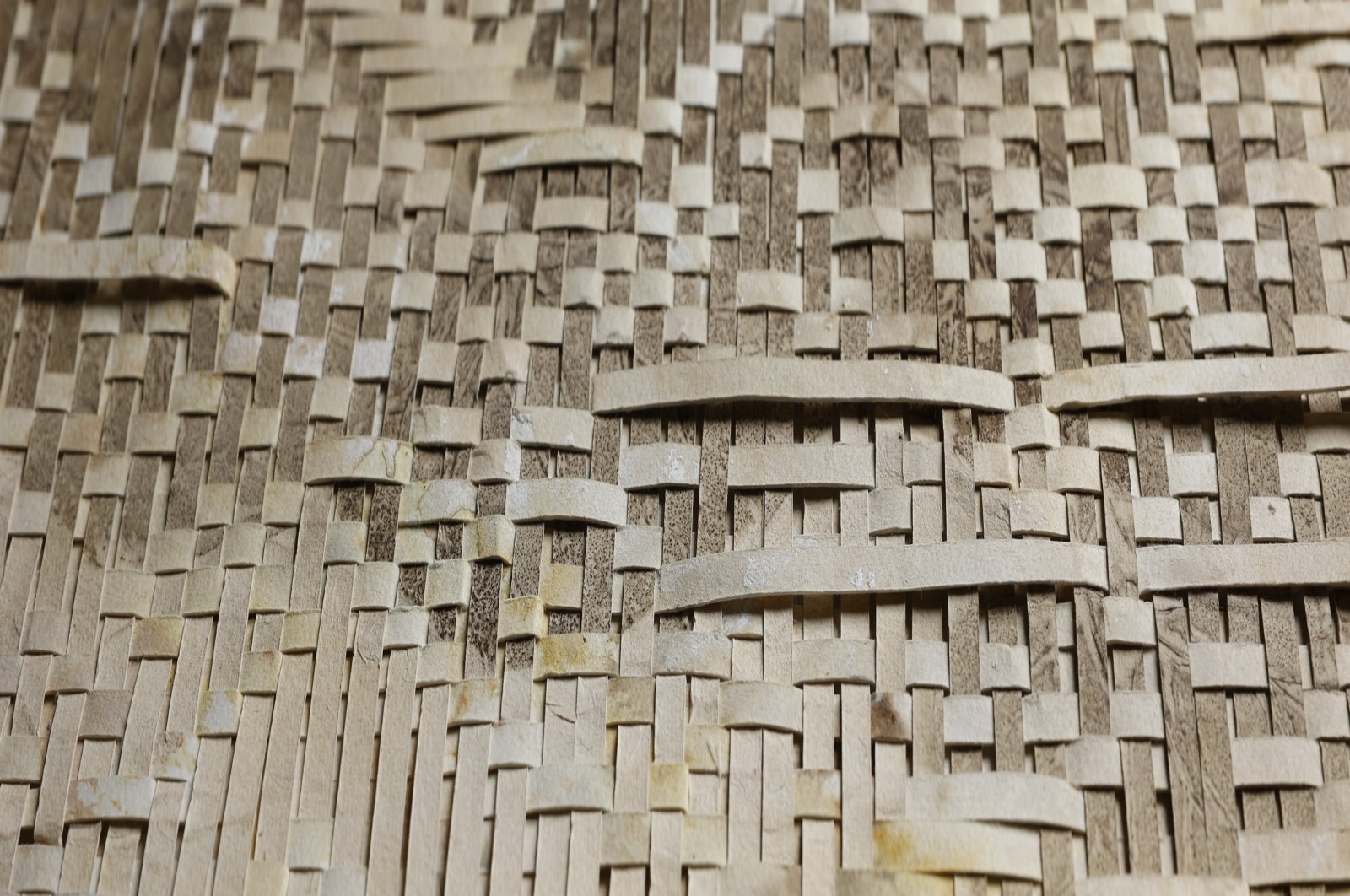 A modest solo show by paper artist Aslı Smith, curated by Yonca Keremoğlu and Rana Kelleci at Kale Design and Art Center in Istanbul, offers a wealth of textural insights into the nature of surfaces

There is a small room on the ground floor of Kale Design and Art Center (KTSM ) along the busy, main drag in Istanbul's Karaköy quarter, where wheezing industrial trucks heave as honking taxis snake through the workaday commuter traffic of the city’s European core. Inside, a series of thin spotlights focus on a variety of artworks hung against the wall or suspended from the ceiling. They are, as itemized, “woven paintings,” derived from a diverse assemblage of natural materials, which the artist, Aslı Smith, crafted with a refined sense for balancing contrasting textures.

Paper, as a medium, has the capacity to be extremely delicate and yet very rough. It is, in that way, like skin, familiar to the human body. Its absorption of color, of pigment, has an uncanny similarity to flesh, and all the more so in the able hands of Smith, whose artworks are corporeal in their vital connection to ecological source, to earthly, living matter. One perfectly striking work by Smith is entitled, “The Sky and All the Colors 01” (2021). It approaches an abstract watercolor aesthetic, as its natural inks soaked into the cotton paper.

Gleaned from indigo, red cabbage, avocado pits and safflower, the organic inks that Smith used to make, “The Sky and All the Colors 01” rounds out a chorus of color harmonies that is, also dissonant, like the blemishes of evolutionary mutation that spawn biodiverse flora. And leaving its hems unwoven, the unfinished quality of the piece preserves its inherent, stylistic consistency owing to the greater concert of worldly imperfection out of which its individuation was conceived.

As a microcosmic metaphor for the embodiment of nature, each single work is an imagined ecology, unique in its color profile and, most importantly, its textures, as the evolutionary principle of touch might be said to be the most primal. While visual, Smith’s works might be appreciated most intimately as evocations of that primary sensation, perceivable in the context of solar, of skin to paper. Yet, while it is not advised to actually reach out to graze Smith’s artworks, their palpability is as visible as the warming light of the sun.

Part of the intent of Smith, in creating her works, is to consider the possibility that sensual experience alone, that is, a confrontation with empirical reality, has the power to cultivate new connections between the synapses of human behavior with that of the environment as a whole, which, until very recently with the identification of the current era as Anthropocene, was moving along a course quite alternative to that of its predominant species. Smith’s art might pose the idea that there are traces of that differentiation still alive everywhere.

The key locus of that perspective is rooted in the sun, which serves as the overarching motif of the exhibition, “Solar: Of the Sun.” The Earth’s star is responsible not only for the emergence of life itself, but also for the range of colors that arise from material by way of light and its perception. Smith’s works, in turn, are integuments of rearranged surfaces as they have been infused with solar energy. Entirely abstract, but for a few impressionistic semblances, their forms do yet evoke naturalistic landscapes, faded visages, cloud-like visions.

At the same time, for all of its tree-hugging passion, its exuberant introspection into the terrestrial nuances of shape and shade, the woven painting craft at the center of “Solar” has an almost digital reminiscence. By weaving strips of paper into frayed rectangles, Smith reveals a cubistic grouping of squares, sequenced dualistically, like the zero and one of computation. Looking closely at such pieces as “The Sky and All the Colors 01,” for example, it is clear that Smith crafted this effect with conscious precision, adapting rudimentary geometries.

The many and multifaceted elements of each and every work by Smith have ample space to breath, exposed by her willingness to allow people to see something of her process. “The Sky and All the Colors 01” is completely unwoven along its top, and below shreds of paper dangle. It gives the piece an unaffected air, as if it were found after having long lain out under the sun, enjoying the diversification of its surface hue by virtue of its vulnerability to the hot brilliant light that pours down from the sky, commingling through it with the darkness of the soil to create the spectrums of color that radiate, alive, to show the stories of their being.

Smith employs certain techniques to emulate the course of nature, as she boils and steams plants, food waste, earth and stones, emphasizing the phenomenon of transformation as utterly innate to living, even if that notion might seem strange in a society that increasingly identifies with the mechanics of virtual representation. After an unprecedented bout of domestic internal displacement in which countless have been forced to migrate indoors, exhibiting the transformative potential of the sun as the origin of coloration, of art and sight, imagination and creativity, Smith’s artwork has simple, but powerful and critical implications.

That said, high-minded ideals aside, there is subdued minimalism to Smith’s work, which is easily perceivable in her piece “Solar 02,” which is the essential fixture of the exhibition as the piece was commissioned for last year’s online project “Possibilities of Waste: Form and Process” for KTSM. “Solar 02” is nearly monochromatic, bearing a light brownish woody palate that brings to mind the handcrafted bamboo mats of a river loft somewhere in the Pacific.

Again, as in “The Sky and All the Colors 01,” Smith wove a diamond square, standing on its point and shot through with shafts of bright, narrow folds that appear like the sun at the center of the piece, which is comprised of squarish, rectangular weaves that alternate between tints of arboreal beige and burnt sienna. In their curatorial statement, Yonca Keremoğlu and Rana Kelleci reference the Homeric epic of Homer’s “Odyssey,” in which the archetypal Penelope weaves in the shadow of the mythical olive tree around their bed.

Penelope, perhaps like the artistry of Smith, assumes the role of Earth, as they share a grounded, active state of creative coping in the face of climate catastrophe and the obscurities of worldwide ignorance as its warning overwhelms often multiple natural disasters at a time. She awaits the return of Odysseus, who, like the sun, is sometimes obscured from the ground looking up. But by her weaving, maybe she is bringing him back.