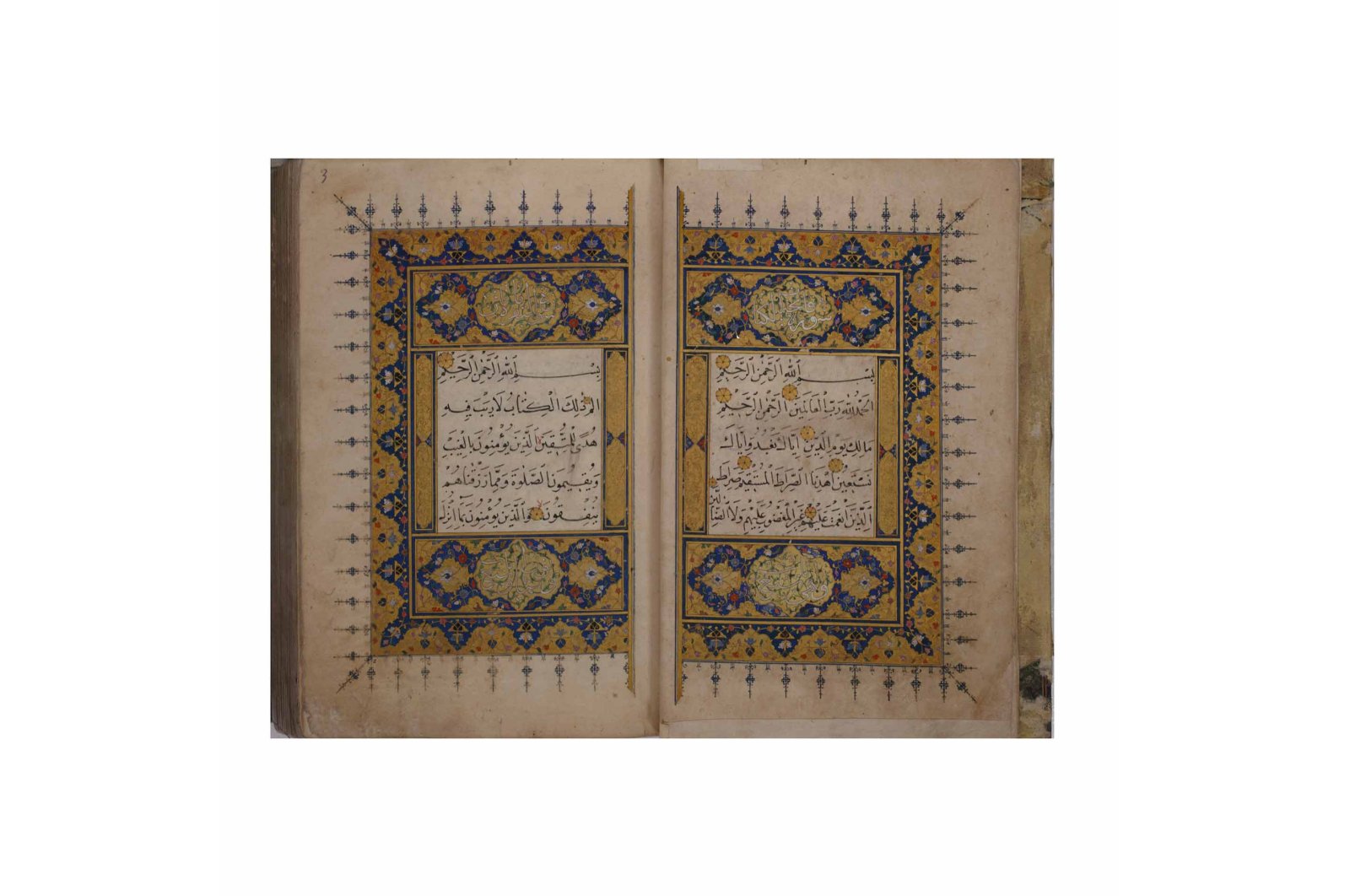 In commemoration of Sheikh Hamdullah, one of the greatest Ottoman calligraphers during the rule of Sultan Mehmed II, also known as Mehmed the Conqueror, and Sultan Bayezid II, Sakıp Sabancı Museum (SSM) has put together an exhibition on the 500th anniversary of his death. The exhibition “Sheikh Hamdullah on the 500th Anniversary of His Death” will be on display for art enthusiasts until March 31, 2021.

The exhibition consists of rare manuscripts, copies of the Quran, verses and albums produced in the second half of the 15th century and the first half of the 16th century. The exhibition has brought together pieces from the collections of the Istanbul Museum of Turkish and Islamic works, Sadberk Hanım Museum, the Kubbealtı Academy of Culture and Art Foundation’s Ekrem Hakkı Ayverdi Collection as well as pieces from the SSM archives. Calligraphy works from Topkapı Palace Museum, Süleymaniye Library, Istanbul University’s Rare Works Library, the Dallas Museum of Art and Hannover Kestner Museum are included in the show through digital installations.

“Our museum, which has an important collection of book art and calligraphy consisting of works collected by our founder Sakıp Sabancı over the years, contains valuable works of Sheikh Hamdullah and his close followers. Based on this, we have long had an idea of organizing a comprehensive international exhibition about the great master,” SSM Director Nazan Ölçer said. Ölçer said they chose to have the exhibition in 2020 to commemorate the 500th anniversary of Sheikh Hamdullah's death.

Ölçer underlined that Sheikh Hamdullah created works of extraordinary value that brought new initiatives to calligraphy and expanded the scope of the art – which is why even after his death he remained a figure calligraphers looked up to. The exhibition was supposed to include works borrowed from museums and libraries abroad under the guidance of experts professor Zeren Tanındı and professor Muhittin Serin, but the show had to be pared down due to the pandemic. Works from the Topkapı Palaces collection were also supposed to be put on display; however, they will have to be exhibited digitally due to ongoing reconstruction and archiving at the palace. “Despite these circumstances, we are very happy to commemorate the great artist with an exhibition,” Ölçer said.

The exhibition “Sheikh Hamdullah on the 500th Anniversary of His Death” is currently running at SSM’s Mansion with the Horse, also known as Atlı Köşk, from 10 a.m. to 4 p.m. from Tuesday to Friday. All visitors are required to wear masks and observe social distancing rules at the museum.

Sheikh Hamdullah's father was Mustafa Dede, sheikh (sufi master) of the Sühreverdiyye mystic order and a member of the Sarıkadızâde family. His father emigrated from Bukhara, an ancient city in the central Asian country of Uzbekistan, to northern Turkey’s Amasya.

During the Seljuk period and the years of Ottoman conquest, poets, calligraphers, miniaturists and ulema who migrated from cultural centers such as
Afghanistan's Herat province, northeastern Iran's Khorasan province and Uzbekistan's Samarkand came to cities like Konya, Kayseri, Sivas and Amasya in Anatolia. Sheik Hamdullah had the opportunity to hone his craft with master Hayreddin Maraşi, from who he received an ijazah license in six calligraphy styles in Amasya, the center of the art of calligraphy at the time. The word "Ijazah" has Arabic origins and means permission or authorization, making an Ijazah license a diploma in today's world.

He is believed to have met Bayezid II at the assemblies of his father Sheikh Mustafa Dede. Bayezid II was a şehzade (prince) and appointed him as his calligraphy teacher from who he received his ijazah. Sheikh Hamdullah, who was rising to prominence even while in Amasya, copied works for the special library of Sultan Mehmed the Conqueror during this period.

Upon the invitation of Bayezid II, who succeeded to the Ottoman throne in 1481 after a power struggle with his younger brother Cem Sultan, Sheikh Hamdullah moved to Istanbul with his family, where he started doing some of his finest work as an employee at the palace.

After Sultan Bayezid II stepped down from the throne in 1512 and was replaced by his son Selim I, he retired into seclusion. During the reign of Sultan Selim I, also known as Selim the Grim or Selim the Resolute, he spent his time at home, praying and receiving visits from his students. When Suleiman I, commonly known as Suleiman the Magnificent, replaced his father Selim I in 1520, he invited Sheikh Hamdullah to the palace, paid tribute to him and asked him to script a copy of the Quran. However, the calligrapher rejected the request on the grounds of his old age and recommended calligrapher Muhyiddin Amasi instead. The sultan then presented him with a sable-skin robe and received his blessing. After a few months, Sheik Hamdullah passed away. He thought little of worldly titles and did not want his name inscribed on his tombstone. His tombstone was later inscribed by Şahin Ağa, the calligrapher who served Sultan Mustafa II.