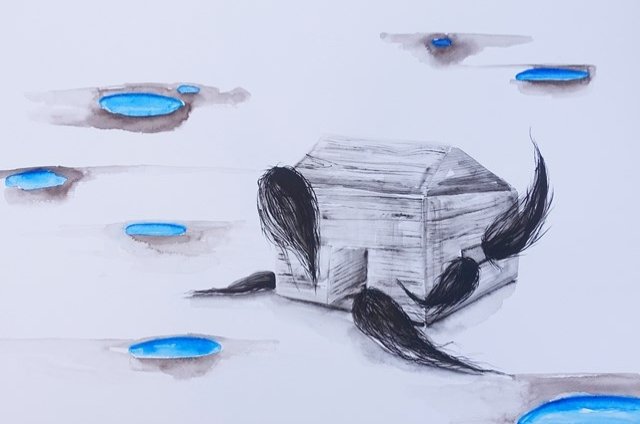 Seda Hepsev's latest exhibition "Stranger Than Paradise" inspired by the 1984 Jim Jarmunsch film, opened at x-ist gallery on Oct. 15 in Istanbul's Beyoğlu district. The exhibition tackles themes such as the quest for a perfect therefore impossible space, translocation, transforming memory and the body in potential new spaces and emphasizes the power of women in creating their own spaces.

The exhibition comprises of imaginary spaces and bodies based on personal and collective stories. Representations of geographical elements such as the sea, mountains, flora as well as torn, scattered motifs and figures interact with the space and each other in ambiguous activity.

In his essay "No Place for Them in Our Minds," German philosopher and sociologist Theodor W. Adorno claims even the "non-reified" or unquantifiable such as thoughts and memories come to an end. He believes that the concept of home is something that only exists in the past and in his philosophy we do not see our houses as homes and feel truly comfortable there. The journey of the exhibition "Stranger Than Paradise" is shaped by this definition or lack thereof one.

The exhibition, consisting of paintings, patterns and objects, is composed of four sections “Preparation,” “Journey,” “Paradise” and “A Year Later.” Although the titles seem sequential, the exhibit is constructed so incomplete images spill over canvases, defying certainty, framework and borders. Water acts as a vehicle for translocation, opening the door for movement with figures placed near water, seas and rivers.

The exhibition, which stemmed from the themes of plurality, lightness, ambiguity and non-centrality in the film "Stranger Than Paradise" about the journey of three strangers between three cities, can be visited until Nov. 21.