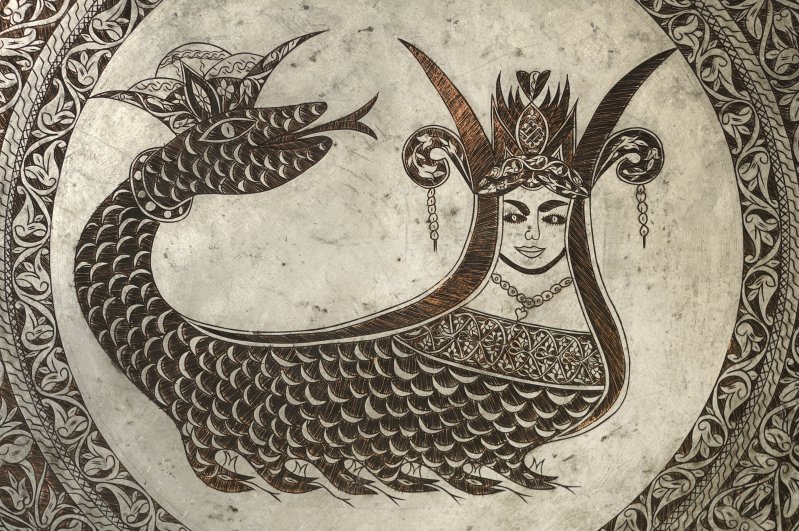 This image, taken in Mardin, Turkey, shows handcraft work on a metal surface and a replica of Shahmaran. (Getty Images / iStock Photo)
by DAILY SABAH Mar 01, 2020 10:27 am

The myth of 'Shahmaran,' the 10,000-year intangible verbal cultural treasure of Anatolia, is coming to life in Mardin for the first time at a public art exhibition. The 'Shahmaran Mardin' exhibition brings together several artists from Turkey and the world

“Shahmaran,” meaning “Shah (King) of the Snakes” in Persian, is a mythical creature, half woman and half snake. This creature, which is mostly seen in mural paintings and believed to be the ruler of the snakes, guards treasures and kills with its breath and gaze. The upper side of it, a human, is called Maran, and it is believed that her soul passed onto her daughter when she died. “Shahmaran,” which is frequently seen in Anatolian tales and paintings, is the head of the creature named Erbüke, which is a combination of the words Er (Human) and Büke (Dragon) in the Turkish folk belief. The female is called İşbüke. The snake ancestor is called Shahmaran.

Thousands of years ago, there were snakes that lived underground. These snakes, called Maran, were intelligent, compassionate and lived in peace. The Queen of Marans was called Shahmaran. Shahmaran was a beautiful young woman. Legend has it that Cemshab was the first person to see Shahmaran. He was the son of a poor family who sold wood for a living. One day, Cemshab and his friends discovered a cave full of honey. His friends, who brought Cemshab down to extract the honey, left him there to get more. Cemshab saw a hole in the cave and noticed light filtering from it. Enlarging the hole with a knife in his pocket, he saw a garden more beautiful than he had ever seen in his life. In this garden, he saw unique flowers, pools and many snakes. He lived there for many years and earned Shahmaran's trust. Years later, he said he missed his family and begged to leave. Shahmaran agreed to release him on the condition that he promise not tell anyone about her place. Cemshab made the promise to Shahmaran and met his family. For years, he kept his promise to tell no one where Shahmaran was. One day, the sultan of the country fell ill. The vizier said the remedy for the illness was to eat Shahmaran's flesh, and the news was released everywhere. When Cemshab showed the location of the well, Shahmaran was found and taken out. Shahmaran told Cemshab: “Blanch me in an earthen dish, give my extract to the vizier, and feed my flesh to the sultan.” So, the vizier died, and the sultan recovered and made Cemshab his vizier.

There are several beliefs that Shahmaran lived in that area. One of them was that she lived in the Tarsus province in south-central Turkey, and the other was southeastern Mardin province. In these cities, people have Shahmaran paintings hanging on the walls of their houses.

Now, Mardin will host the exhibition, "Shahmaran Mardin," from April 20 to July 20 in an attempt to enrich the cultural and artistic life of Turkey and revive the myth of Shahmaran. Nearly 2-meter-tall statues, created in collaboration with the business community and artists, will be on display at the exhibition.

The exhibition, to be hosted by the Mardin Metropolitan Municipality, is being organized by Art Publik / Keçi Events. The exhibition brings together art-loving brands and highly valued artists, bringing brands to the street through art by offering them the privilege of being a part of the business world.

The proceeds to be generated from the sale of the statues at a VIP auction at the end of the exhibition will be used to fund archaeological excavations in the ancient city of Dara. With tours, concerts, auditions, workshops, panels and photograph routes to be organized during the exhibition, "Shahmaran Mardin" will be reminiscent of a festival.

The exhibition offers brands a great promotion opportunity. It offers a flexible model for the 2020 business goals of brands, as well as adding value to brands, creating awareness and gaining positive green profiles through art.

Shahmaran treasury of verbal culture, which is about to be lost and must be kept alive, will be passed on to future generations through different disciplines of contemporary art at the exhibition. The exhibition is also intended to challenge gender discrimination, and reveal the true identity and value of women, which has existed since matriarchal times through the Shahmaran myth.

Project Director Zeynep Helvacı is experienced in public art. In 2017, Helvacı organized the Istanbul exhibition of CowParada, which is the largest urban art and social responsibility event in Istanbul, by coloring the streets of Istanbul with different cow sculptures for 12 weeks. She said they will bring to life an extraordinary example of public art filled with firsts through "Shahmaran Mardin." “Our work at Art Publik is to reach out to people, offer visual arts to the audience in areas that are accessible to everyone in everyday life instead of in closed environments such as museums and galleries, and turn them into participants and experience it. We aim to do this with public art in Mardin. We know that public art exhibitions meet people's aesthetic needs, motivate and inspire them, enhance their creative talent and encourage innovation. Moreover, it activates the imagination, opens up perceptions, improves cognitive abilities and deepens empathy. Public art is public goodness,” she said.

Helvacı stated that the exhibition creates an opportunity to make a meaningful difference to brands, adding: “This is an independent collective work with the support of brands and art lovers. Therefore, we wish the business community to take part in the exhibition.”

The Shahmaran statue, designed by sculptor Ayla Turan specifically for the exhibition combining the traditional with the contemporary, is the flagship of the exhibition. Born in Hamburg in 1973, Ayla Turan began her art career after graduating from the Department of Sculpture, Faculty of Fine Arts, Mimar Sinan Fine Arts University. Addressing objects or persons from everyday life with a childlike approach, Turan aims to direct the viewer to look deeper into what they see and to read many topics regarding social problems. Turan has produced various statues for public areas in several countries, including Germany, France, Hungary, Israel, Latvia, South Korea, Dubai, Egypt, Italy, India, Syria, Burkina Faso, China, Sweden and Mexico. She lives in Istanbul.