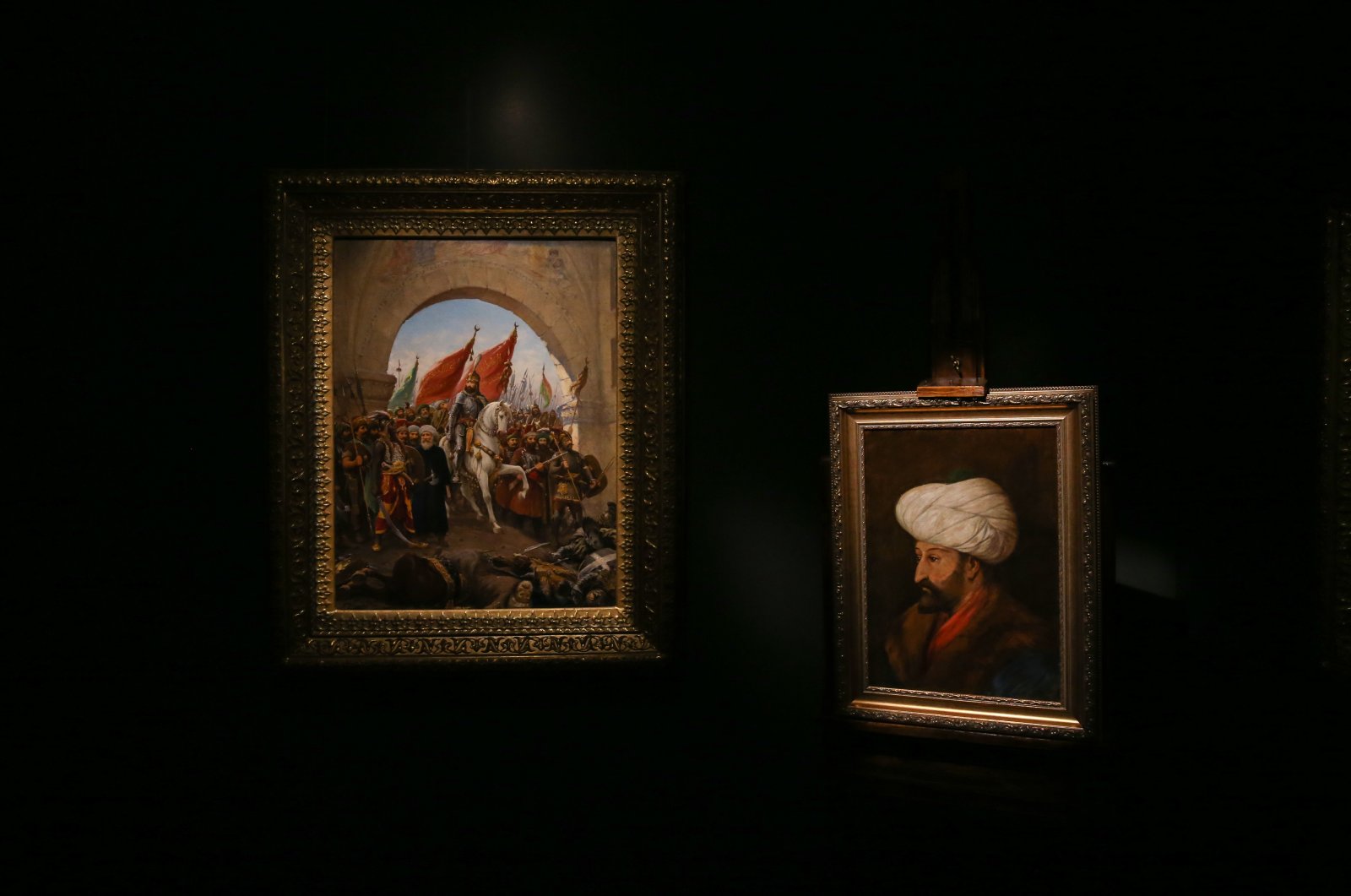 Turkish painter and art teacher Halil Pasha’s 20th-century portrait of the Ottoman Sultan Mehmed II, who opened a new era with the Conquest of Istanbul in 1453, will be presented to the art lovers for the first time in the exhibition, which will be opened in the autumn in the National Palaces Painting Museum.

The Presidency of the National Palaces Administration, which has the most comprehensive painting collection in Turkey, is gearing up to bring art lovers together with five portraits of Sultan Mehmed II, aka Mehmed the Conqueror.

These portraits by painters Hasan Rıza, Halil Pasha, Feyhaman Duran and Paolo Veronese, as well as Italian painter Fausto Zonaro, are as useful as documents in terms of providing clues and learning about history.

While Feyhaman Duran’s Sultan Mehmed II portrait is currently on display at Topkapı Palace, portraits by Zonaro, Hasan Rıza and Halil Pasha, as well as Duran, will be exhibited in the Painting Museum. Halil Pasha's portrait of Sultan Mehmed II, on the other hand, is of special importance since it will meet art lovers for the first time.

Gülsan Kaya, art historian and the director of the National Palaces Painting Museum, stated that the portrait of Sultan Mehmed II was painted by the Turkish painter Halil Pasha at the order of Şerif Abdülmecit, the husband of Sultan Vahdettin's daughter Rukiye Sultan, stressing the importance of the said painting due to its 20th-century interpretation.

Stating that Halil Pasha drew this portrait by looking at the former examples, Kaya also underlined the significance of the portrait, ordered by a dynasty son-in-law, as it will be put on display for the first time. She stated that the portraits of the sultan have always been displayed through the eyes of foreign painters and that the portrait of the sultan will be exhibited for the first time in the Painting Museum with the interpretation of Halil Pasha.

Kaya said the exhibition, which is planned to be brought together with art lovers in the fall, will also include the portrait of Yavuz Sultan Selim for the first time with the interpretation of Halil Pasha, adding that the collection will also feature the portraits of sultans made by foreign painters.

Recalling that a part of the Crown Chamber, which served as the residence of Ottoman crown princes in Dolmabahçe Palace, was converted into the Painting Museum after a seven-year restoration, Kaya stated that the exhibition will take place in this museum in Beşiktaş.

The era of sultan portraits in the Ottoman Empire began with Sultan Mehmed II. Venetian painter Gentile Bellini, who came to Istanbul in 1479, stayed in the city for 18 months and made many paintings at Topkapı Palace, including the portrait of Sultan Mehmed II. While the art piece, dated 1480, is currently in the National Gallery Collection in London, there is no definite information about how this very famous Mehmed II portrait of Bellini was taken abroad.

Court painter Fausto Zonaro's Mehmed II portrait in the National Palaces collection was made in 1907 at the order of Sultan Abdülhamit II. The painting was illustrated by enlarging the portrait by Bellini from 1480. It was made as a bust portrait from three-quarters profiles. The sultan was depicted in a Venetian-style arch-shaped frame, with his fur coat and red ulema turban on his head. The fabric decorated with jewelry hanging from the pedestal of the portrait is regarded as an indication of rulership. The phrase "Magni Sultani Mohameti II Imperatoris" in the base, which means "Conqueror of the World," is considered to reflect the political meaning of the portrait. Meanwhile, seven crowns in the composition emphasize that Mehmed II was the seventh sultan of the Ottoman Empire.