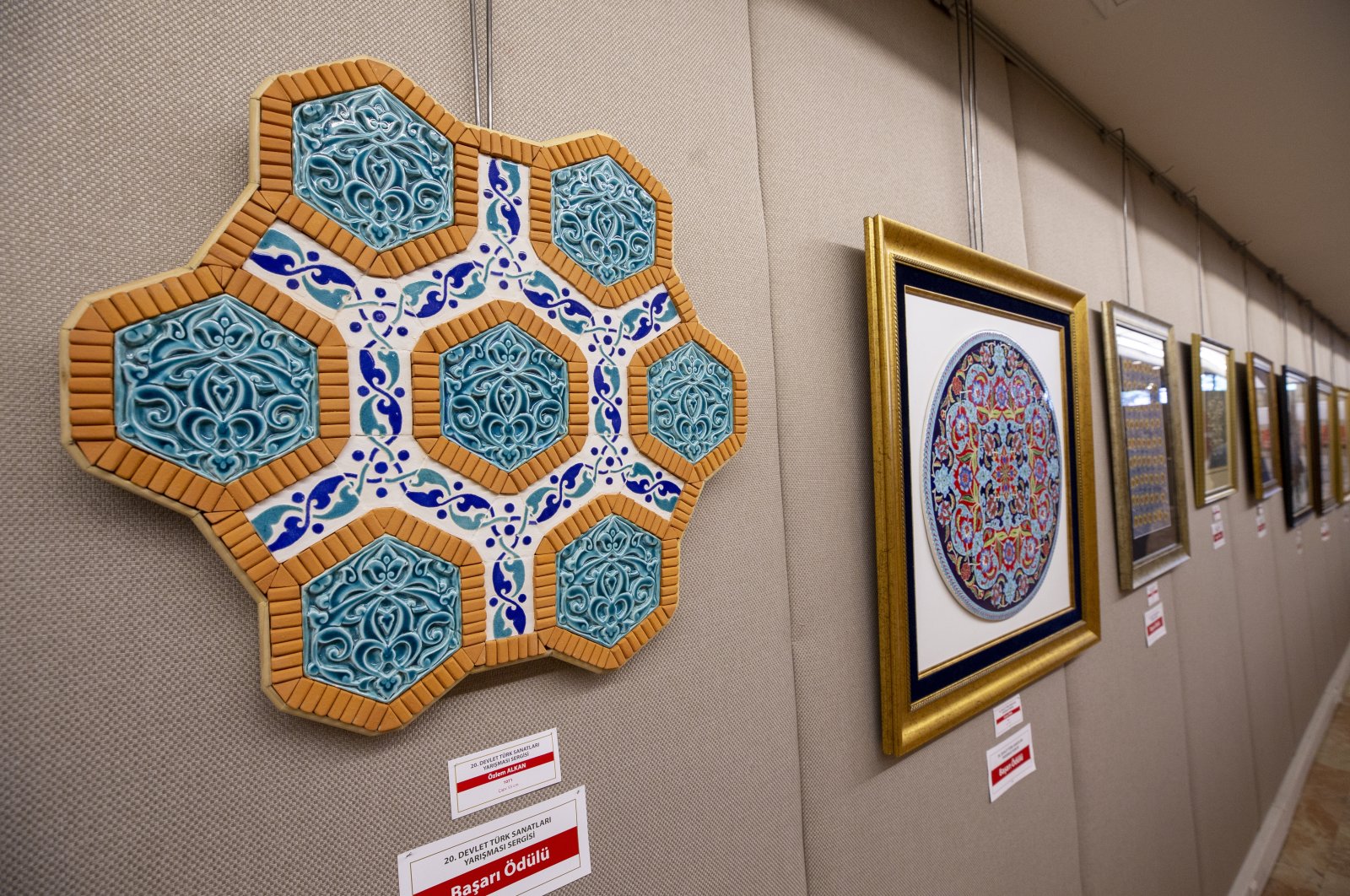 Some works on display at the exhibition of the competition at the National Library, the capital Ankara, Turkey, Oct. 7, 2020. (AA PHOTO)
by Anadolu Agency Oct 08, 2020 12:04 pm
RECOMMENDED

To paint in retrospect: On the canvases of Toygun Özdemir

The award ceremony and exhibition of the 20th State Turkish Decorative Arts Competition were held at the National Library Exhibition Hall in the capital Ankara on Wednesday. Forty-three artists producing works in the mediums of tile patterns, marbling, drawing and kat’ı art (a type of quilling) received achievement awards, honorable mention awards and exhibiting awards.

Speaking at the opening of the exhibition, Culture and Tourism Deputy Minister Özgül Özkan Yavuz said the ministry has been organizing a state Turkish decorative arts competition since 1986 in an attempt to support traditional arts. She stated that they have increased the number of awards this year to further encourage artists working in this field. The ministry organized calligraphy, illumination and miniature competitions in November last year, while competitions in tile patterns, marbling, drawing and kat’ı art were held this year.

Traditional arts hold a privileged place in Turkish culture Yavuz said, adding: “Contributing and supporting the development of Turkish arts are the priority of our ministry. In one of his hadiths, our beloved prophet says: ‘Allah is beautiful and he loves beauty.’ Adopting this as a motto and guide, our ancestors have been making efforts to apply this understanding to art and aesthetics for centuries, and we see it closely in their works that have survived to this day. No matter where we go in Anatolia today, we come across unique examples of these arts in places of worship such as mosques and masjids, tombs and other cultural assets.”

Yavuz thanked those who make efforts to educate the new generation of artists for their contributions, saying: “As the ministry, we organize competitive exhibitions in many areas every year based on the principle of ‘protecting, supporting art and artists and passing them on to future generations’ and provide important support to many events. Our selection committee, which consists of valuable specialists in each field,

examined and evaluated a total of 89 applications with great care and created this exhibition consisting of 43 works of art this year.”

After the completion of the exhibition, a catalog consisting of the art deemed worthy of achievement awards, honorable mention awards and exhibiting awards was also offered to art lovers.

The event was attended by General Manager of Fine Arts Murat Salim Tokaç, Deputy General Manager of Libraries and Publications Ali Odabaş, Ankara Provincial Director of Culture and Tourism Ali Ayvazoğlu and artifact owners. The exhibition can be seen at the National Library in the capital Ankara until Oct. 30.

To paint in retrospect: On the canvases of Toygun Özdemir