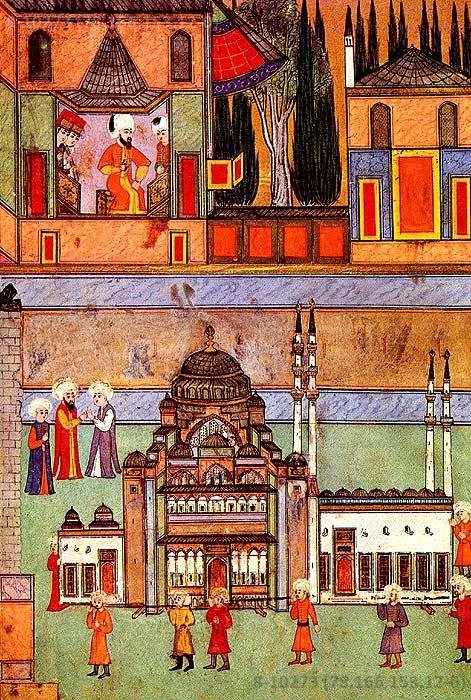 A miniature depicting a wooden and ivory model of Süleymaniye Mosque presented to the Ottoman sultan, from Nakkaş Osman's “Surnâme-i Hümayun” album. (Photo Courtesy of the Directorate of Communications)
by Anadolu Agency Feb 14, 2021 1:04 pm
RECOMMENDED

Turkey's art of miniature, a classical decorative craft that was recently added to the UNESCO Representative List of Intangible Cultural Heritage of Humanity, will be the subject of a new exhibition that opens on Monday as part of the 360 Culture and Arts project initiated by the Directorate of Communications.

The exhibition will feature the works of the renowned Nakkaş Osman, one of the leading ‘nakkaş,’ or miniaturists, of the Ottoman Empire, who was the chief miniaturist in the late 16th century. Osman's “Surname-i Hümayun,” which are Imperial Festival Books created by artists to mark and depict in pictorial and textual detail imperial celebrations such as weddings and circumcision festivals, will be displayed in the exhibition.

The exhibition will be held at Marmaray Yenikapı Station in Istanbul. It will welcome visitors until March 5 and will be free of charge. The exhibition's aim is to raise awareness of and introduce to younger generations, traditional arts of Turkey. It will be a digital exhibition that incorporates holographic and special projection techniques that make it possible to display the only copies of miniaturist Osman's artworks which are preserved at the Topkapı Palace.

Ottoman miniature was developed over several centuries into a visual language that used to express the cultural diversity and cosmopolitan geography of the Empire. Nakkaş Osman was one of the leading artists of miniature during the height of the empire in the 16th century. He became to be known as the “Leonardo da Vinci” of the East, whose unique style was visible throughout his nearly 600 art pieces.