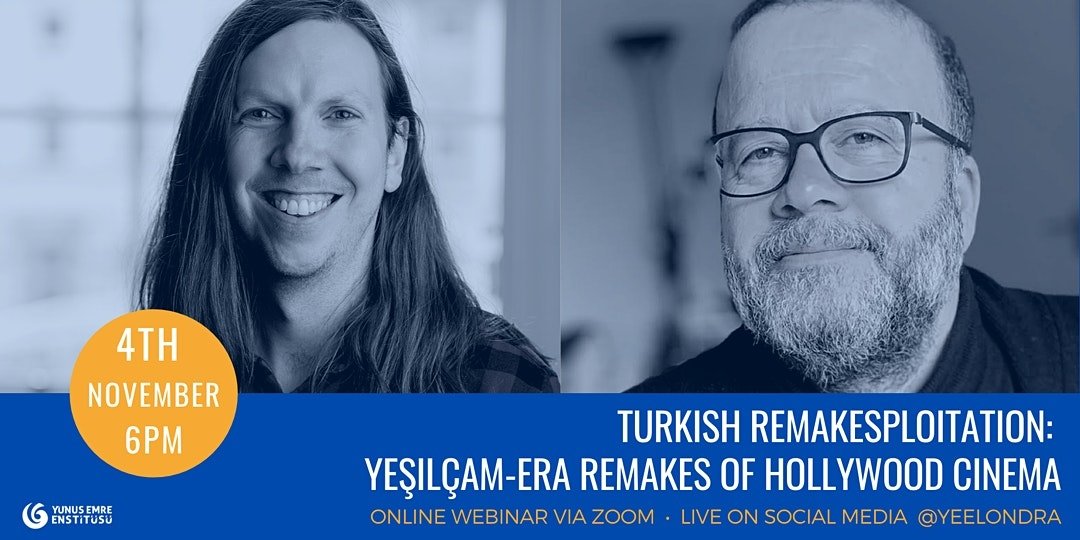 Yunus Emre Institute (YEE) in London will organize an online webinar on movies of Yeşilçam, or classical Turkish cinema, with lecturer Iain Robert Smith and professor Nezih Erdoğan on Nov. 4 at 6 p.m. GMT via Zoom.

The virtual talk, “Turkish Remakesploitation: Yeşilçam-era remakes of Hollywood cinema,” will be moderated by Erdoğan, an academic in the field of cinema focusing on Turkish film history-historiography and will feature Smith, a senior lecturer on film studies at King’s College London, as the guest speaker. The webinar will be held as a part of the Arts and Culture Lecture Series of YEE.

The free event will focus on a global phenomenon “remakesploitation," which many of us are unaware of. Many of us are familiar with William Friedkin’s movies like “The Exorcist” (1973) and the famous series “Star Trek” (1966); however, their Turkish remakes are not as popular. “Şeytan” (1974), the remake of “The Exorcist," was directed by Metin Erksan while “Turist Ömer Uzay Yolunda” (“Ömer the Tourist in Star Trek”) (1973) was produced and directed by Hulki Saner. These movies can be seen as some of the finest examples of low-budget exploitation film reworkings of Hollywood blockbusters in Turkey when the phenomenon flourished in the 1970s and 1980s Yesilçam-era. Smith will discuss the value they hold in investigating the process of cultural globalization and the approach taken by Turkish directors while making adaptations of Hollywood films and episodes.

Smith has authored “The Hollywood Meme: Transnational Adaptations in World Cinema” in 2016 and is the co-editor of the collections “Transnational Film Remakes” and “Media Across Borders."

Erdoğan has published articles and book chapters on colonial discourse, national identity and sound and body in Turkish popular cinema, the reception of Hollywood in Turkey and the distribution-exhibition of American films in Turkey. His chapter “Violent images: hybridity and excess in The Man Who Saved the World” appeared in “Mapping the Margins: Identity, Politics and the Media." His book “Sinemanın Istanbul’da Ilk Yılları: Modernlik ve Seyir Maceraları” (“Early Years of Cinema in Istanbul: Adventures in Modernity and Spectatorship”) was published in 2017.

Both speakers were previously hosted by YEE for the 2019 London Turkish Film Week, where the restored film “Hudutların Kanunu” (“Law of the Border”) (1966) by Ömer Lütfi Akad was discussed.

Smith and Erdoğan's virtual talk will focus on a different take on film and understanding of cultural exchange, with the history of Turkish films in the spotlight.

Booking for the webinar can be made through the website Eventbrite. The event will be livestreamed on the institute's social media accounts for those who are unable to secure a ticket.