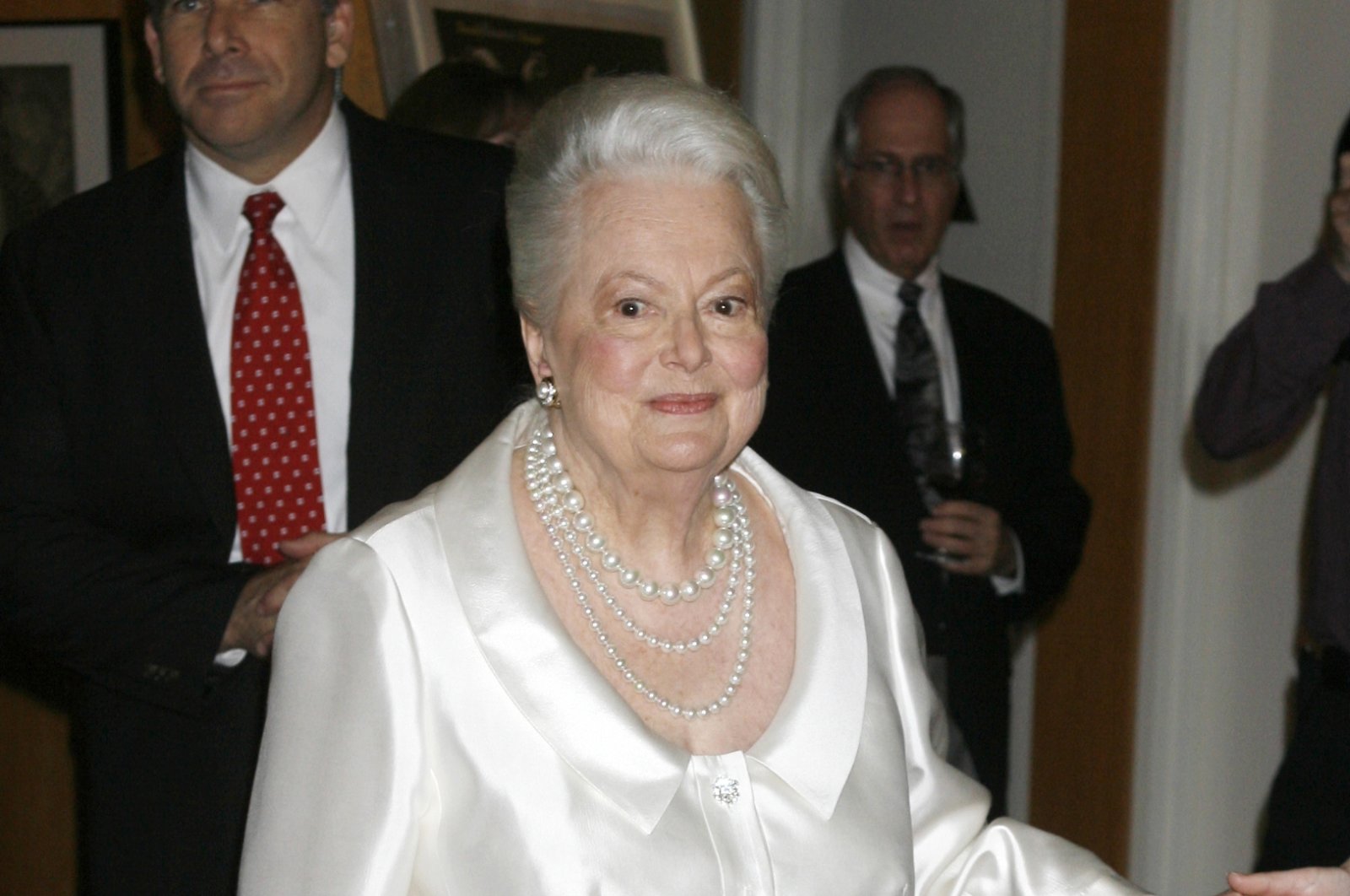 British-American actress Olivia de Havilland, considered the last surviving actress of the Golden Age of Hollywood, died Sunday at the age of 104, the Hollywood Reporter said.

She died of natural causes at her home in Paris, where she had lived for more than 60 years, it said, citing her publicist.

De Havilland was best known for her role as Melanie Hamilton in "Gone with the Wind."

De Havilland's acting career included two Academy Awards, a victory over Hollywood's studio system and a long-running feud with sister Joan Fontaine that was worthy of a screenplay.

She first drew attention by playing opposite swashbuckling Errol Flynn in a series of films starting in the 1930s and made an enduring impression as the demure Southern belle Melanie in "Gone With the Wind" in 1939.

Later she would have to fight to get more challenging roles – a battle that ended up in court but paid off with Oscars for "To Each His Own" in 1946 and "The Heiress" in 1949.

De Havilland, a naturalized American born to English parents in Japan, had lived in Paris since 1953. After retiring, she made few public appearances but returned to Hollywood in 2003 to take part in the 75th Academy Awards show.

De Havilland's family moved to California when she and Joan were children. She began her movie career after director Max Reinhardt saw her in a California production of "A Midsummer Night's Dream" and cast her in his 1935 film version of the play. Warner Bros. was impressed and, as was the custom at the time, signed the teenager to a seven-year contract.

Warners loaned her out to make "Gone With the Wind" in 1939 and de Havilland's gentle but willful personality helped shape the role of Melanie one of the movie's most intriguing parts. The role earned her the first of her five Oscar nominations.

"I felt very drawn to Melanie," de Havilland later said. "She was a complex personality compared to the heroines I'd been playing over and over."

The prestige of the Oscar nomination and the popularity of "Gone With the Wind" did not get de Havilland the types of roles she wanted. She often refused the parts Warner Bros. offered, which resulted in the studio suspending her several times.

In 1943, de Havilland declared that her seven-year deal with Warners had expired, but the studio said she still owed them the six months that she spent on suspension.

De Havilland won in court, weakening the major studios' dominance over actors by limiting actors' contracts to seven years, regardless of suspension time. But challenging a powerful studio had been a risky career move, and she did not make a movie for three years.

De Havilland made a triumphant return to the screen in 1946 with the Oscar-winning role of an unwed mother in "To Each His Own." Three years later, her portrayal of a spinster brought another Academy Award for "The Heiress."

The Oscars provided fodder and a venue for de Havilland's rivalry with Fontaine, who was one year younger. Their relationship had been testy since childhood and the acrimony reached a new level in 1942 when the sisters were both Oscar-nominated – de Havilland for "Hold Back the Dawn" and Fontaine for Alfred Hitchcock's "Suspicion." Fontaine was the winner.

Four years later, when de Havilland won for "To Each His Own," Fontaine extended a congratulatory hand at the ceremony, but de Havilland did not acknowledge her – a moment captured by photographers. De Havilland reportedly was upset about a catty remark by Fontaine about her husband, writer Marcus Goodrich.

The sisters stopped speaking altogether in 1975 after their mother died. Fontaine said de Havilland had not invited her to the memorial service, but de Havilland claimed Fontaine had said she was too busy to attend.

When Fontaine died at age 96 in December 2013, de Havilland issued a statement saying she was "shocked and saddened."

In an interview marking her 100th birthday in 2016, de Havilland told the Associated Press (AP) she called Fontaine "Dragon Lady."

"I cannot think of a single instance wherein I initiated hostile behavior," de Havilland said. "But I can think of many occasions where my reaction to deliberately inconsiderate behavior was defensive."

De Havilland made 50 movies in her career and nine were with Flynn, including "Captain Blood," "The Charge of the Light Brigade," "The Adventures of Robin Hood" and "They Died With Their Boots On." She told LA Weekly she had a crush on Flynn but never acted on it.

Other memorable roles included playing both a sweet and evil twin in "The Dark Mirror" in 1946 and a person with a mental health condition in "The Snake Pit," which earned her an Oscar nomination in 1948. Later she starred in two well-received suspense films, "Lady in a Cage" and "Hush ... Hush, Sweet Charlotte" with Bette Davis (both 1964).

De Havilland did not like how she was portrayed in the 2017 film television miniseries "Feud: Bette and Joan" about Davis and Joan Crawford. She sued the producers, claiming she was made to look like gossip and hypocrite, and the case went to the U.S. Supreme Court, which let stand a ruling that dismissed de Havilland's suit.

De Havilland had a son, Benjamin, with Goodrich and a daughter, Giselle, with her second husband, journalist Pierre Galante.