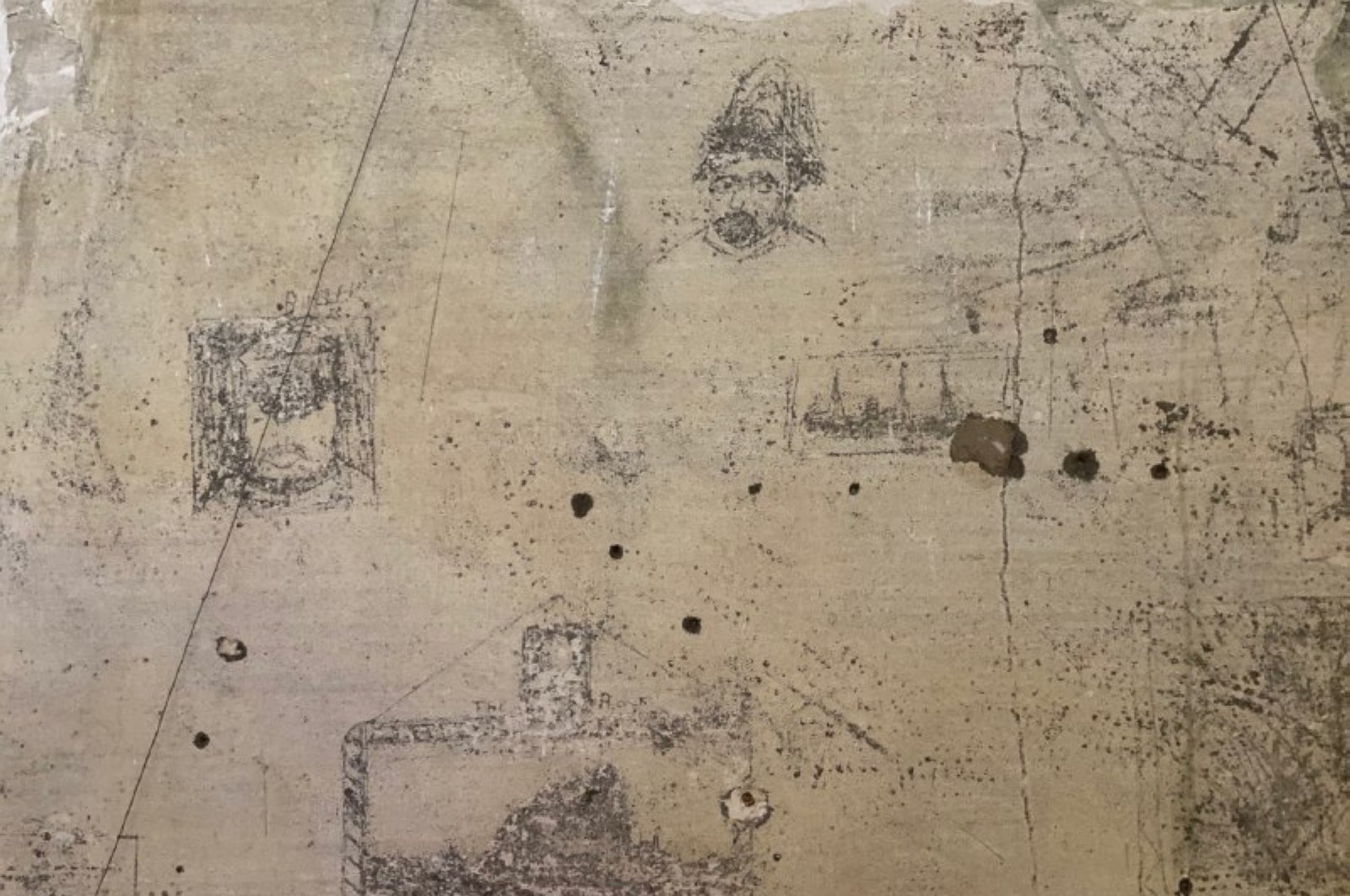 Some inscriptions written on the walls of the Galata House by the prisoners when the place was used as outpost are seen in this photo, July 16, 2020. (AA PHOTO)
by Anadolu Agency Jul 19, 2020 11:35 am

Dozens of buildings with an impressive past in Istanbul's historical Pera district, such as Galata House and Pera Palace Hotel, have interesting stories that could be the subject of so many more movies and books

Istanbul is a city where the fragrance of history emanates from the old buildings that line almost every street. Such is the richness of Istanbul's cultural and historical texture that many movies and books could be based just on this subject. Case in point, authors Fatma Berber and Sümeyra Teltik have spent two years studying the historical buildings in Istanbul's famous districts to prepare their new book "Bir Pera Masalı" ("A Pera Tale"), in reference to the former name of the historic area now corresponding to modern-day Beyoğlu district.

In an interview with Anadolu Agency (AA), they said that thousands of people walk in front of these structures every day but don't even glance at them. The authors said the historical stories of these buildings have been largely forgotten in the dusty pages of history and need to be brought back into the limelight. Thus, in the book, they tell the true stories of the historical buildings with fictional characters and a fictional plot.

One of the structures that caught their attention during their research was Galata Evi (Galata House). Berber said that inside the building, which was used by the British as an outpost during the occupation of Istanbul by British, French and Italian forces in the 1920s, one could still see the marks of memories left on the walls by prisoners. "At the start of the 20th century, the British Embassy moved to the Tarlabaşı neighborhood. At the same time, the area around what is today the Beyoğlu Training and Research Hospital was turned into a prison and hospital complex. In that area, Galata House was built in 1905 as a prison. During the occupation of Istanbul in the 1920s, it was converted into an occupation outpost. So, a bathroom and a laundry room were added downstairs. As the structure has remained unaltered historically, the grating on the windows and the inscriptions on the walls written by the prisoners also show the period when it was used as an outpost."

Berber said the building was bought in the 1940s by a mechanical engineer and was turned into a house. She said that the historical texture of the building was not disrupted when it was used as a house, but rather its features were protected. The building was then acquired by architect Mete Göktuğ in 1991, and he and his wife, who was also an architect, opened a restaurant in the building.

Berber stated that they had invented a character by the name of Mustafa who was a prisoner in Galata House during the occupation years of Istanbul to tell the history of the building in the book. "We wanted to turn the building into more of a tale and to witness it through the eyes of a character we thought would be a prisoner here when Istanbul was officially occupied. We called him Mustafa. Back then, porridge was served to prisoners without salt or sugar. In a nearby hotel, prisoners were being tortured. So, we wanted to tell a small moment of those prisoners through the eyes of Mustafa and thus wanted to make a story of this structure."

Teltik accompanied Berber for two years as they visited historical sites across the Pera district of Istanbul. According to her, Pera was in some ways the heart of Istanbul. "We read about and researched extensively and visited all across Pera, and in the end, we turned 22 structures into stories. We examined them through the memories of people who had lived here in those times, newspaper clippings of those years and books of foreign travel writers. Thanks to all these we told 22 stories based on 22 locations."

Teltik touched on the historical significance of one particular structure in the area, the Pera Palace Hotel. She said that the hotel was ingrained in the culture of the city and that it was the first thing that popped into people's heads when Pera was mentioned. She said that the 19th-century building was still a shining star of the district.

"Back then in Pera, there was no hotel to properly accommodate foreign guests. We had a 'han' (inn) culture, and some hostesses in the area would open their homes and their elegant rooms to guests who came from abroad. First true hotels were built on Istiklal Avenue in Pera, but the most beautiful and the most popular hotel was Pera Palace, built in 1895. Such was its popularity that sedan-chairs would be dedicated to carrying travelers getting off the Orient Express to the hotel."

Teltik pointed out that many famous authors and Hollywood artists had been a guest at the Pera Palace. She highlighted that the founder of the Turkish Republic, Mustafa Kemal Atatürk was a guest at the hotel in 1917. She said that the hotel was groundbreaking at the time, in every aspect.

"The first 'European' hotel was Pera Palace. Aside from the sultan's palace, it was one of the first buildings to receive electricity. The first running hot water and the first elevator is in this hotel as well."

Teltik then continued with the story of Çiçek Passage, which is on one of Istanbul's most visited locations, Istiklal Avenue. She spoke about the first opera-house of Turkey, "Theatre de Pera," which was built in Çiçek Passage. She said that in the area the house which belonged to Mihail Naum Duhani, a Christian from Aleppo, burnt down in 1831 and Duhani then rented the place to various people. Italian illusionist Giovanni Bartolomeo Bosco was one of them, and he built a wooden theater-house in the place in 1839.

"Bosco rented the place from Duhani. He started to perform illusion shows. Then he decided to return to his country, but Duhani tried to continue his tradition and built a large opera-house on the place. Opera served the Ottoman people and foreign guests in here for 25 years. Its audience included Austrian and British kings. It is known that then-Sultan Abdülmecid traveled here on his horse all the way from the Dolmabahçe Palace. After 25 years the opera-house burned down on June 5, 1870. We tried to tell the story of Çiçek Passage using the opera culture of this place," Teltik said. She added that Italian opera pieces would come to the "Theatre de Pera" before they were performed in any other European city.

Teltik also pointed out the history of the passage's name, Çiçek, which means flower in Turkish. She said that after the Bolshevik Revolution in Russia, young Russian girls would make their living by selling flowers in the passage, and many thought that's where the name came from, but it was not so. She said that later, during the Turkish Republic era, the florists cooperative would own a place in the passage, and that was actually where the name originated from.

The book "A Pera Tale: The History of Pera in Pictures from Past to Today" is out now and features several historical and culturally important sites of Istanbul, from the Taksim Republic Monument to Ağa Mosque, Sait Naum Paşa Mansion, Çiçek Passage, Narmanlı Han, British Outpost and London Hotel and the famous Istiklal Avenue, once known as the Grand Rue de Pera.