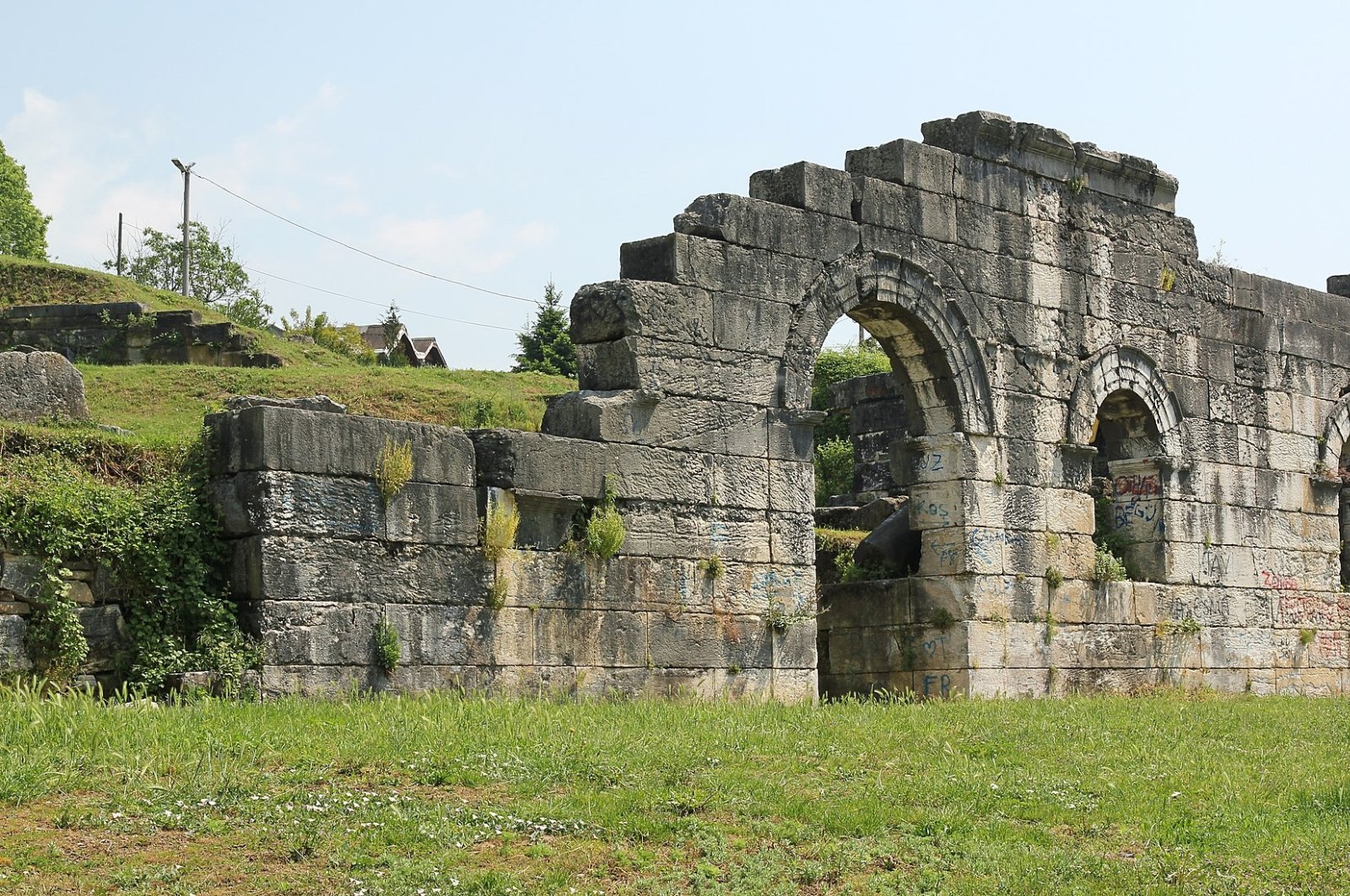 Scaenae frons, the elaborately decorated permanent architectural background of a Roman theater stage, in the ancient city of Prusias ad Hypium in Düzce, northwestern Turkey.
by Anadolu Agency Dec 04, 2020 10:47 am

New findings excavated from the theater of the ancient city of Prusias ad Hypium, known as the Ephesus of the Black Sea, are seeing the light of day

Archaeologists have uncovered exciting new findings in the excavations of a theater in the ancient city of Prusias ad Hypium. Located in Turkey’s northwestern province of Düzce, the city is referred to as the Ephesus of the Black Sea and dates back to the third century B.C.

The Ministry of Culture and Tourism extended the excavations for another 12 months in the ancient city, which is the oldest settlement in the Western Black Sea region. The recent work unearthed the grave of a baby and a number of statues around the city's theater, providing significant insight into the period of late antiquity in the region.

Although new structures have been built in the ancient city over time, the area's underground wealth remains intact, including its theater, ramparts, aqueducts and Roman bridge.

Remarking on the city's durability, a scientific adviser of the excavation, associate professor Emre Okan from the Department of Archaeology at Düzce University, said that the lower seating area in the western and front sections of the theater was sturdier than they expected. Okan said the team uncovered a large portion of the theater in their excavations, which progressed faster than planned.

The theater's semi-circular seating area, known as the "40 stairs," has a length of 100 meters (328 feet) and a width of 74 meters. Its steps, decorated with lion's claws, and arched passages are among the structures that have survived the test of time.

"We paid great attention to the excavations in the stage section. When we started working in the area, we detected that there were walls built in the period of late antiquity. Our excavations in the western section continue at full steam, and the theater is beginning to come to light in all its glory," he said.

Okan said the findings exceeded the team's expectations. "We came across findings belonging to different periods than we had anticipated. Inside the stage building, we found a fourth-century grave. Currently, we are still working on it. Since you normally don't find graves within stages, the grave shows that the people of the period of late antiquity used this area in a different way. The grave looks like it belonged to a little baby. Based on the coins unearthed during excavations around the grave, we consider it to belong to the fourth century," he explained.

The bones found in the grave will be examined, and the archaeologists will be able to determine the baby's age, sex and whether it had any diseases.

Explaining that statues and remnants of statues were also unearthed in the area, Okan noted: “The excavation has now reached a layer where the compacted soil ends and findings start to reveal themselves. Now, we have gone down an original layer, and it is only a matter of time before we come across a significant find.”

Known as “Hypios” and “Kieros” in earlier periods, the area was seized by Prusias I of Bithynia. The people of Bithynia, known for their opulent lifestyles, adorned the city with monuments and named it Prusias in honor of their king.

After going bankrupt due to their lavish way of life, the people of the region bequeathed the kingdom to the Romans. The influence of Latin culture on the city under Roman rule added to the richness of the city, building on its already rich architecture. The city became known as Prusias ad Hypium.

The region later passed into Byzantine hands and then came under Turkish rule during the principality of Osman Gazi – which eventually became the Ottoman Empire. After Osman Gazi handed the region over to Konuralp Bey, one of the first Turkish commanders who served in the establishment of the empire, it was given its current name, Konuralp.

The Konuralp Museum was established in 2003 to preserve the cultural heritage of the ancient city of Prusias ad Hypium. The museum boasts a collection of 6,237 items including 1,848 archaeological artifacts, 491 ethnographic objects and 3,898 coins.

A statue of Tyche, the goddess of fortune, was uncovered in 1931. The original statue, dating to the fourth century A.D., was put on display at the Istanbul Archaeology Museum after its restoration, and a copy is on display at the Konuralp Museum.

In 1998, a floor mosaic depicting Orpheus, a legendary musician, poet and prophet in ancient Greece, was unearthed in the ancient city's south. After restoration work, it was put on display at Konuralp Museum.