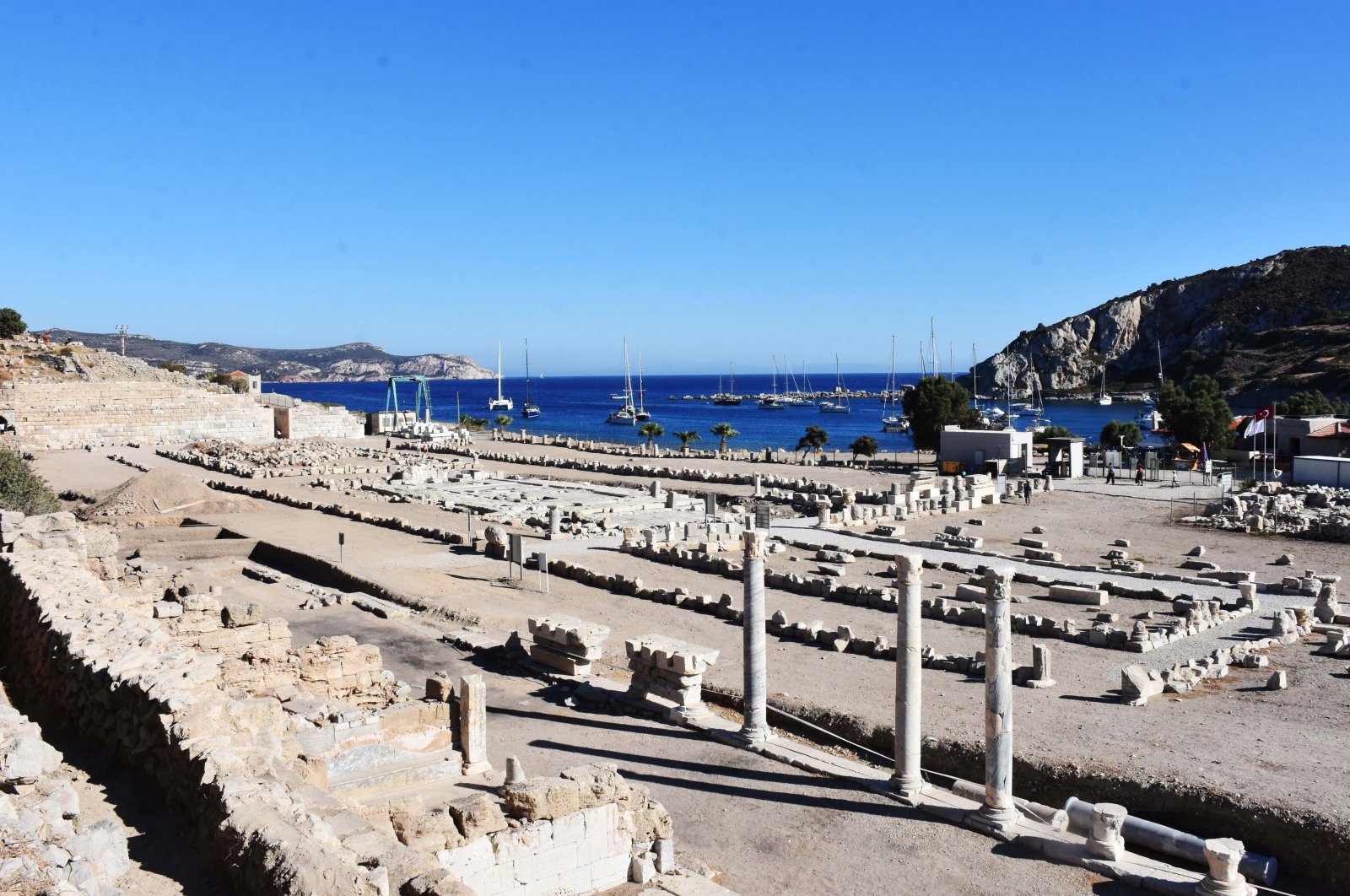 The 2,600-year-old city of Knidos, also known as Cnidus, is a rare historical gem that annually draws thousands of local and foreign tourists to the Datça district of Turkey's southwestern Muğla province. The ancient Greek city has stood the test of time remarkably, with magnificent structures, a port street lined with columns, an agora, two ancient theaters and two ports.

Having reopened its doors to visitors on June 15 this year in line with an easing of outbreak measures, Knidos has so far seen as many as 40,000 visitors, all taking care to abide by "the new normal” conditions.

The fact that the ancient city can be reached by land and by sea due to its special location boosts its appeal for many.

Ertekin Doksanaltı, head of the excavation team in the ancient city and a lecturer at the Selçuk University's archaeology department, told Anadolu Agency (AA) that Knidos, where excavations are ongoing, was the most important center of culture, art and science in the ancient world. He emphasized that the geographical location of the ancient city was an important element in the city's rise.

“This is a place we can call the 'gate of the Aegean.' It is right at the intersection of the Aegean and Mediterranean regions. Thanks to this geographical feature, the city has two ports," Doksanaltı said.

He added that in addition to its military significance, Knidos was distinct in antiquity for its prominence in art, science and culture. “For example, Sostratus of Cnidus is said to be the architect of the lighthouse in Alexandria, which is considered one of the seven wonders of the ancient world. Knidos, a neighbor of the Greek island of Kos (Istanköy), has a medical school that rivals the Hippocratic School of Medicine. Knidos’ school is actually much older than the Hippocratic School on Kos. The doctors of Knidos served in many places in the Mediterranean Basin in the days of old," Doksanaltı said.

Unfortunately, Western travelers and researchers who came to the ancient city in the 18th and 19th centuries damaged it through their excavations, seeking to whisk artifacts to their own countries, museums and collections, he said.

Expressing disappointment that many of the artifacts excavated in Knidos could still be found abroad, Doksanaltı stated: “Many artifacts obtained by travelers and researchers, which are often far from archaeological or scientific in method, have been taken to museums abroad. The works carried out by British archaeologist Charles Newton in Knidos from 1857-1859 are the most striking of these excavations. Artifacts obtained during Newton's work constitute some of the most beautiful collections of London's British Museum today. The Lion of Cnidus, which was taken from here, greets visitors coming into the museum in the entrance courtyard to this day.”

Doksanaltı said that the excavations by Turkish experts were launched in Knidos in 1988 and have continued under his own supervision since 2012, noting that the team focused on restoring the ancient city. He stated that, instead of opening new excavation areas, they had focused on closing the excavation pits that caused the city to appear in ruins and on repairing ruined artifacts. He further noted that the port street, one of the famous streets of Knidos, had been unearthed and shown to visitors in recent years. The artifacts recovered from the excavation are on display at the Marmaris Museum.

Doksanaltı said visitors enjoy reaching the city by way of the sea, in particular, and that recreational sightseeing vessels, boats and private yachts are anchored in the Port of Knidos.

Remarking that the number of visitors to the city has gained increasing momentum, Doksanaltı said: “Western visitors, in particular, take great interest in the city. There has also been a huge increase in the number of domestic visitors in recent years"

Noting the 40,000 visitors welcomed since June 15 despite the coronavirus pandemic, Doksanaltı said, "This data is significant, showing that visitor interest increases every year alongside ongoing excavations and unearthings."