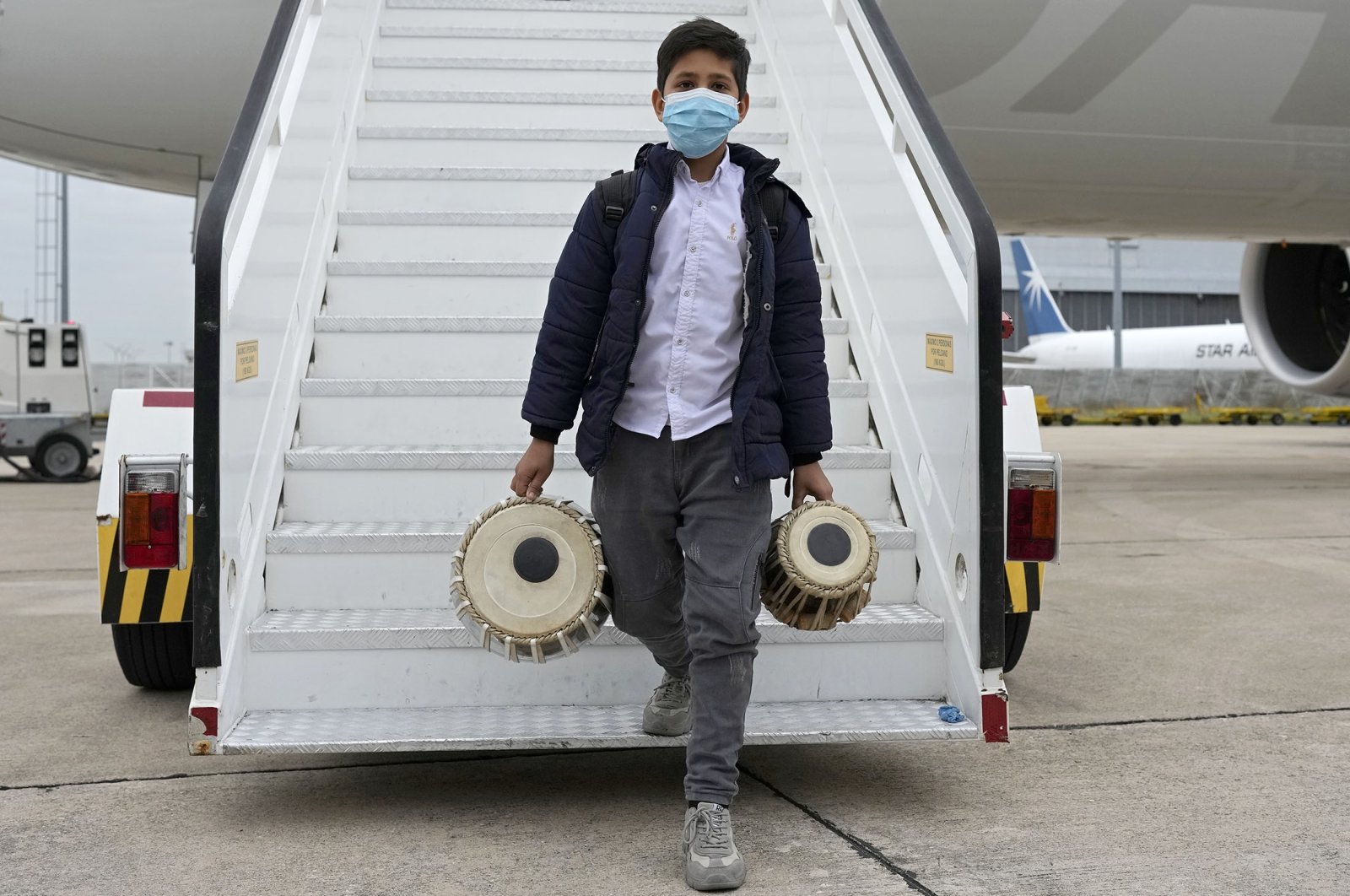 An Afghan boy carrying musical instruments disembarks from an airplane at a military airport, in Lisbon, Portugal, Dec. 13, 2021. (AP Photo)
by Associated Press Dec 14, 2021 10:34 am
RECOMMENDED

After the Taliban seized power in Afghanistan, musicians in the country knew their futures were in jeopardy and needed to sought sanctuary elsewhere. For the students and faculty members of the National Institute of Music of the war-torn country, Portugal has granted asylum to them and their families, giving hope of rebuilding their acclaimed school once again.

The 273-person group, including some 150 students, flew to Portugal capital Lisbon from Qatar's Doha. Their departure from Afghanistan was staggered in five airlifts to Doha over six weeks in October and November.

"The arrival of the (institute's) community today means that the first and most important step of saving lives and insuring freedom is now over,” said the Institute’s Founder and Director Dr. Ahmad Sarmast.

Governments and corporate and private donors met the group’s evacuation and resettlement expenses.

"From now on, (the institute’s) musicians will be a symbol of courage and resolve, not only for Afghan artists, but also for the people of Afghanistan, in their struggle against the oppression and tyranny of the Taliban,” Sarmast said.

The musicians are among tens of thousands of Afghans, including many from the country’s sports and arts community, who have fled since the Taliban seized Afghanistan in August, when the United States and NATO ended their 20-year military presence.

The Afghanistan girls’ youth soccer team has also resettled in Portugal, a country of 10.3 million that has taken in 764 Afghans since the summer.

Afghanistan has a strong musical tradition, and a pop music scene had flourished there over the past two decades. But many musicians fear for their futures under the Taliban.

The Afghanistan National Institute of Music, founded in 2010, was renowned for its inclusiveness. It became a symbol of a new Afghanistan, with boys and girls studying together and performing to full houses in the U.S. and Europe.

The school’s campus in Kabul is now occupied by a Taliban faction. Its bank accounts were frozen and its offices ransacked, according to former school officials.

The plan is to recreate the school in Portugal, allowing the students to continue their educations, as part of a wider Lisbon-based center for Afghan culture that will welcome exiles.