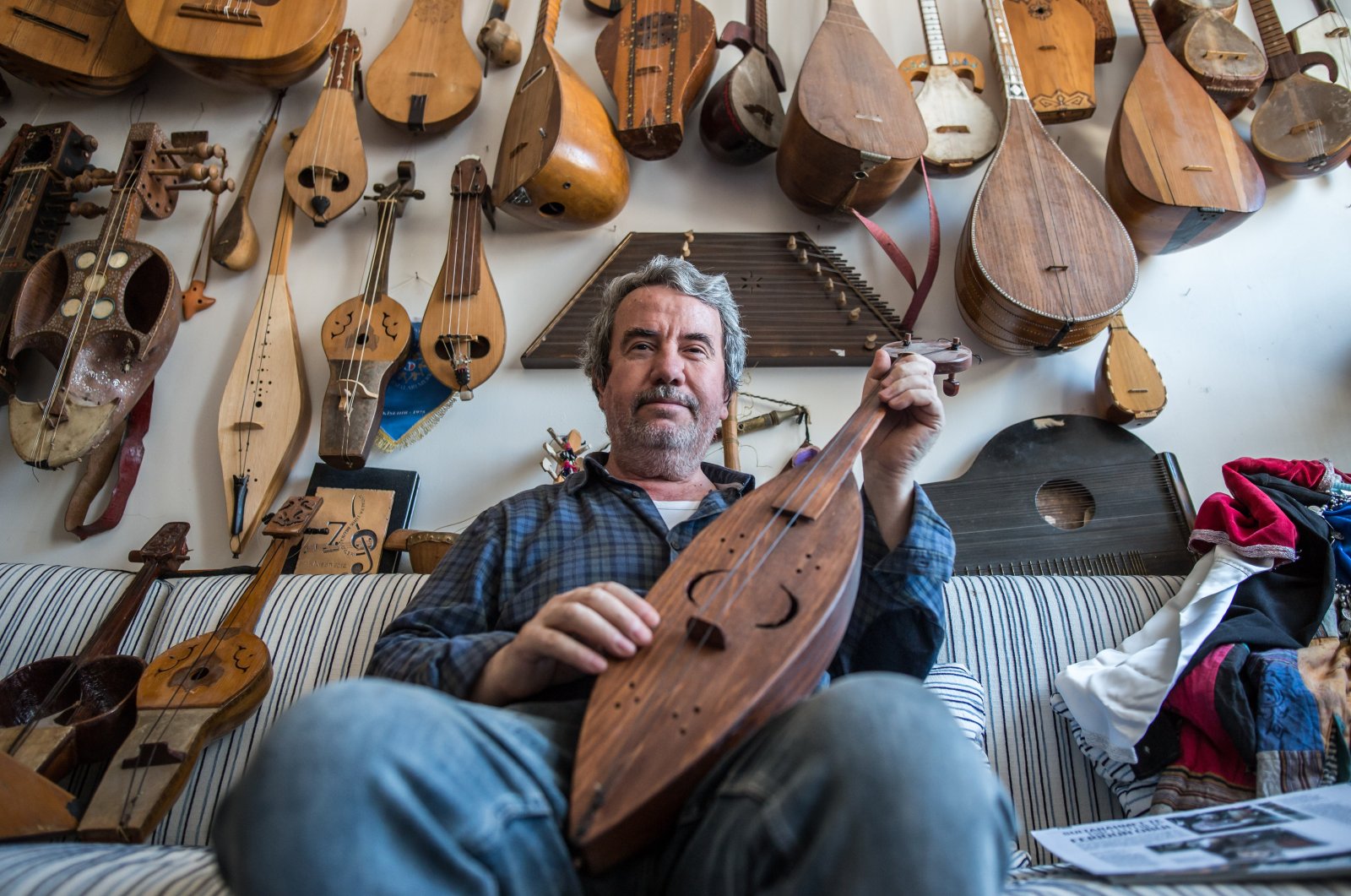 Feridun Obul poses with string instruments he made at his workshop in Sultanahmet Square, Istanbul, Turkey, June 23, 2018. (PHOTO BY MURAT ŞENGÜL)
by Anadolu Agency
Nov 24, 2020 9:43 am

A 20-square-meter (215.3-square-feet) shop, resembling a carpenter's workshop, located in an old inn on Istanbul's historic Sultanahmet square is where instruments are made for customers around the world. Feridun Obul is a master instrument craftsman, producing world-famous musical instruments and whose clients come from Central Asia, Asia, Europe, Africa and the U.S. Calling his workshop the Turkish Music House Workshop, he has been crafting instruments for 27 years.

Born in 1961 in the northwestern province of Eskişehir, Obul previously worked as a roofer, but his life was forever changed when he attended a concert at the Cerrahpaşa Center for Ethnomusicology 34 years ago. Moved by the music he heard at the concert, Obul quit roofing and began making musical instruments. From then on, the craftsman has dedicated himself to crafting instruments, nowadays focusing on authentically crafting musical instruments that are at risk of being forgotten.

At first, Obul made instruments like the ones played at the concert that had such an impact on him before beginning to produce long forgotten-instruments of the Turkish-Shaman musical tradition, dating back thousands of years. His repertoire now includes a diverse range of rare instruments including the Shaman drum, Napoleon lyre, kopuz (also called komuz, a fretless Turkic lute played in Central Asia), rebab (a kind of fiddle), dombra (a Turkic lute), Shiraz tar, Sumerian harp, bouzouki, mandolin, Azeri kemenche and Coptic violin.

When making the instruments, Obul uses photographs, old books, cave paintings and miniatures to research the climate, vegetation, geography and traditions of the people from which the instruments originate. Once he feels he has sufficient knowledge about the instrument, he begins the planning phase. The next step is finding and processing the materials required. Obul sources the materials entirely from nature and attempts to replicate how the instrument would have originally been crafted, using a variety of materials including wood from spruce, plane, ebony and walnut trees, horsehair, Siluridae skin, buffalo heart membrane and horn.

The instruments made by Obul are on display at Ibrahim Alimoğlu Music Museum in the western province of Afyonkarahisar, Neşet Ertaş Museum in the central province of Kırşehir and the Science, Culture and Arts Center at Eskişehir’s Sazova Park, as well as at various museums in Hungary, Italy, the U.K., Germany, Austria, Azerbaijan and the U.S. His instruments will also be on display at the Atatürk Cultural Center (AKM) in Taksim Square once the new museum opens.