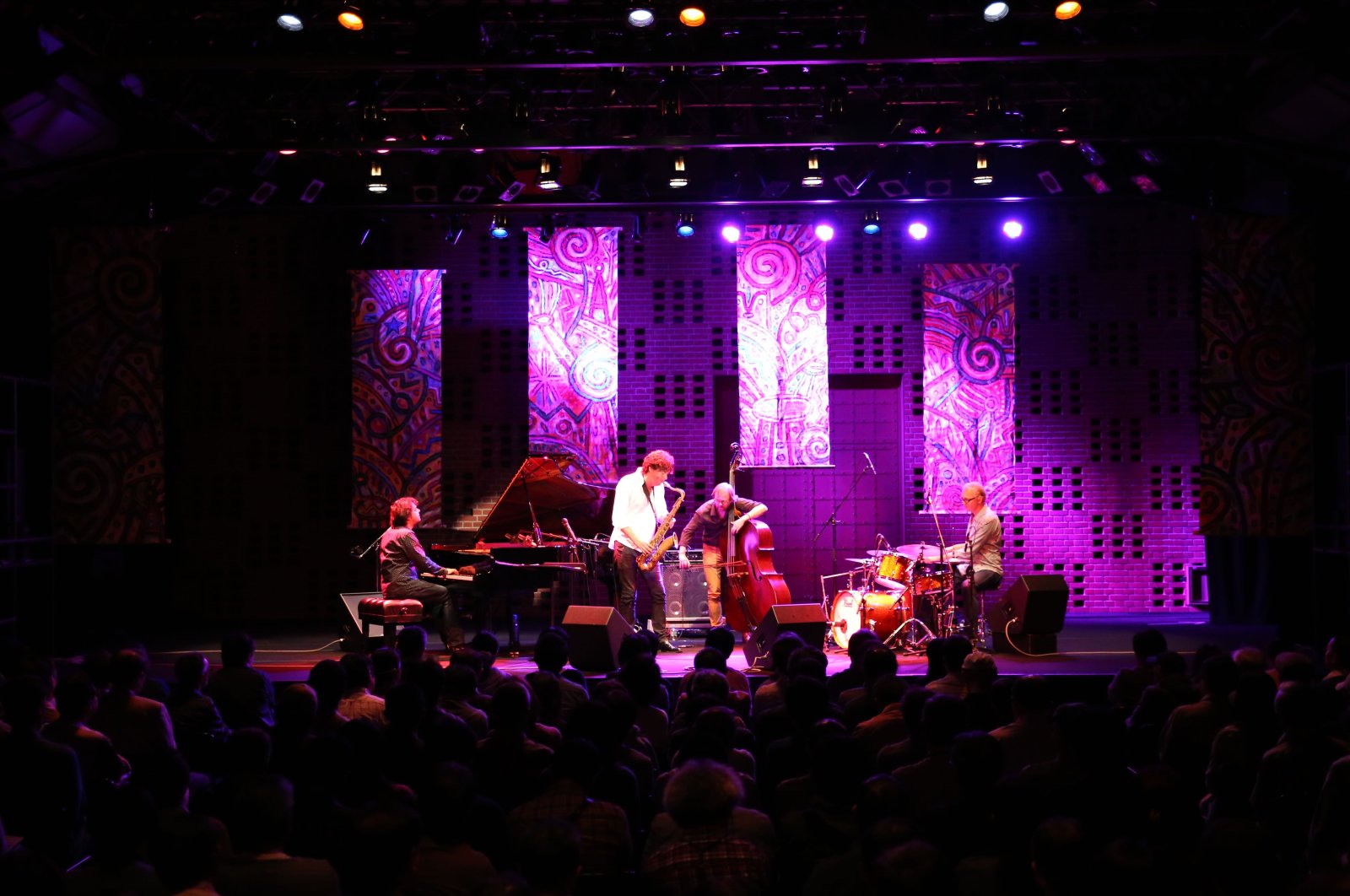 Yuri Honing Acoustic Quartet is one of the guests to perform at the festival this year.
by DAILY SABAH Aug 18, 2020 12:48 pm
Edited By Irem Yaşar

The 17th International Gümüşlük Music Festival will be the first festival organized with renewable energy in Turkey, with the participation of world-renowned classical music and jazz artists

Named after the fishing village of Gümüşlük in Bodrum, a popular vacation resort town in southwestern Muğla province, the International Gümüşlük Music Festival kicked off with a concert by Dutch musician Rosanne Philippens and German pianist Michail Lifits on Monday. The 17th edition of the festival, organized in collaboration with the Netherlands' embassy and consulate in Turkey, runs through Sept. 17.

For the first time this year, the power needs of the festival will be met by renewable energy generated by solar panels, which have been provided with the support of the Dutch solar energy company Volta Energy. With only a few examples of such an event in the world, the festival opens a brand-new era for Turkey.

The International Gümüşlük Music Festival was first organized in 2004 under the artistic advisory of Gülsin Onay and artistic direction of Eren Levendoğlu. The festival, which has hosted world-renowned classical music and jazz artists for 17 years in unique venues of Bodrum, also offers educational opportunities for young musicians within the scope of the Gümüşlük Festival Academy. This year’s edition opened its doors to listeners once again by taking all the necessary health measures against the coronavirus outbreak.

For the first time this year, the festival program has been broadened to include a film selection focusing on several themes, including music, environment and children, curated by Azize Tan, the project director of Başka Cinema. The festival program also includes an exhibition series entitled “Gümüşlük, Woman and Musicians,” which includes the works of Civan Canova, Yiğit Uygur and a collective exhibition of 42 photographers organized by the Herodotus Academy. Parallel events will take place throughout the festival to discuss environmental and socioeconomic issues as well.

The festival concert program commenced with the performance of internationally recognized Dutch violinist Philippens and German pianist of Uzbek descent Lifits on Monday evening at the Antique Stone Quarry. Philippens is an artist in high demand across the Netherlands, where she performs regularly in the major halls and series both as a soloist and chamber musician. Lifits, who is rapidly gaining international attention with his captivating musicality, has played in both highly acclaimed solo recitals at major concert venues and performed as an accomplished chamber musician.

Taking a look at the artists who will be featured at the festival, Luisada began playing the piano at the age of 6, and at 16 he began studying at the Conservatoire de Paris under Dominique Merlet and Marcel Ciampi (piano) and Genevieve Joy-Dutilleux (chamber music). At age 29, he had performed in Europe, the U.S. and Asia and was known as a performer of outstanding brilliance. Çakmur was the first prize winner of the 10th Hamamatsu International Piano Competition in 2018 and the Scottish International Piano Competition in 2017. In 2012, he was accepted to La Schola Cantorum in Paris to work with Marcella Crudeli. Since 2012, he has had the opportunity to work with musicians such as Alan Weiss, Arie Vardi, Claudio Martinez-Mehner, Leslie Howard and Robert Levin.

Şensoy began her studies of the violin at Çukurova University State Conservatory in 2006. She graduated from Bilkent University Music and Performing Arts High School in 2018. Since 2018, she has been studying in under Krzysztof Wegrzyn at the University of Music, Drama and Media in Hannover, Germany. Deniz is one of the 2019 scholarship holders of "Future’s Women Stars," awarded by the Istanbul Foundation for Culture and Arts (IKSV).

Born in 1993, Aliyev made his solo debut at the BBC Proms with the BBC Concert Orchestra in 2017 and won the Arts Club Sir Karl Jenkins Music Award. His debut CD with pianist Anna Fedorova, “Russian Masters,” was released by Champs Hill Records with critical acclaim. Future recordings include Classic FM, Warner Classics and a CD with renowned Turkish pianist Fazıl Say in Austria which will include his sonata “Four Cities” for cello and piano.

Honing is one of Holland’s most prominent saxophone players with tour experience in over 90 countries. He has played and recorded with greats such as Pat Metheny, Charlie Haden, Kurt Rosenwinkel, Ibrahim Maalouf, Craig Taborn and Paul Bley. In 2001, Honing received the Edison Jazz Award for his recording “Seven,” featuring Bley, Gary Peacock and Paul Motion. For a couple of years, Honing led his acoustic quartet with ECM recording artist Wolfert Brederode, Icelandic bassist Gulli Gudmundsson and Dutch drummer Joost Lijbaart. The group toured and performed at major festivals in Europe, Asia and South America.

Zamir, known for playing soprano saxophone, began his musical endeavors at the age of 11. After his high school education, he started to show interest in Jewish, Hasidic and Eastern European music as well as West Indian rhythmic approaches in New York. Zamir takes the stage as a soloist in rhythm sections consisting of bass and drums in all three albums.

The International Gümüşlük Music festival will conclude with the performance of Turkey’s leading pianist Gülsin Onay, violinist Erkin Onay and young Turkish cellist Çağ Erçağ on Sept. 15 at the Ancient Stone Quarry. Performing the mighty Tchaikovsky Trio, this closing concert will be a tribute to the phenomenal young cellist Benyamin Sönmez, who passed away in 2011. Sönmez had performed the Tchaikovsky Trio with Gülsin Onay and Erkin Onay at the festival 10 years ago, and with this performance at the final concert, the festival commemorates his life and music once again.

Gülsin Onay's truly international career has spanned across 80 countries, from Venezuela to Japan. The Cambridge-based Turkish state artist and UNICEF goodwill ambassador has been the artistic adviser at the International Gümüşlük Music Festival since its foundation in 2004.

Erkin Onay was born in Istanbul in 1976. At the age of 17, after successfully completing the exam for special talents, he entered the MusikHochschule in Hannover. He continued his postgraduate studies in Turkey with Turkish state artist Suna Kan and in 2001 received the diploma of Proficiency in Art. Onay has given many concerts in Turkey as well as appearing as a soloist with orchestras such as the Presidential Symphony Orchestra and Istanbul State Symphony Orchestra.

Erçağ entered the Ankara State Conservatory of Hacettepe University in 1985 and studied percussion and the cello with Jozsef Gyorfy. During his education, he gave many recitals and participated in numerous chamber orchestras. Erçağ has given concerts in countries such as France, Egypt, Lebanon, Holland and Belgium. He is currently the first cellist of the Istanbul Borusan Philharmonic Orchestra as well as a soloist of Cellistanbul, which was founded by four cellists in 2002.

To learn more about the details of the program, you can visit the website of the festival. Tickets can be purchased from Biletix.