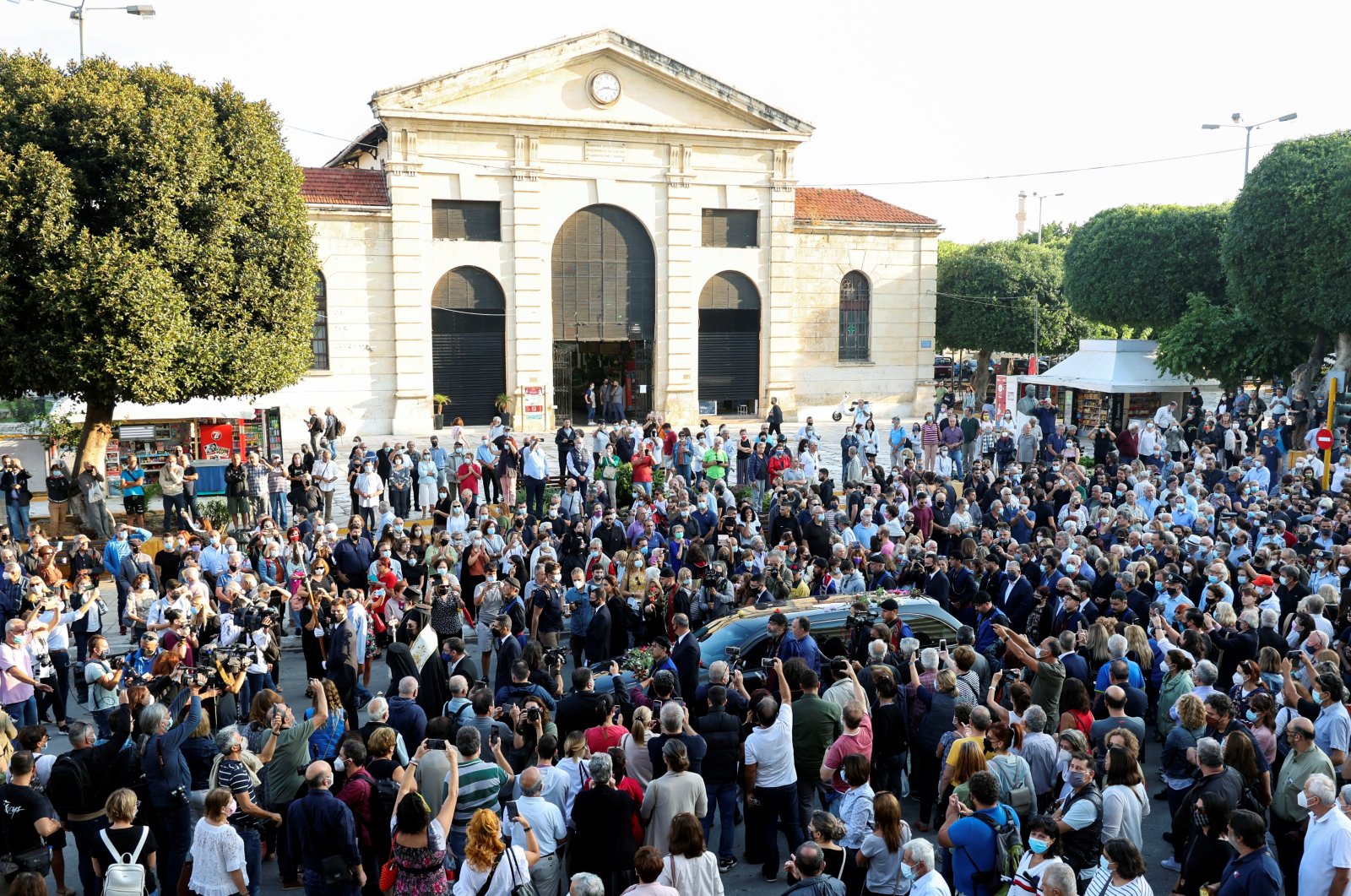 People escort a hearse carrying the coffin of late Greek composer Mikis Theodorakis during a farewell ceremony, in the city of Chania, on the island of Crete, Greece, Sept. 9, 2021. (Reuters Photo)
by DAILY SABAH WITH AGENCIES Sep 09, 2021 4:14 pm
RECOMMENDED

Iconic Greek composer and politician Mikis Theodorakis was laid to rest Thursday in a funeral ceremony attended by thousands in his home island of Crete.

Theodorakis, whose work brought Greek culture to a global audience in the latter 20th century, was buried in the village of Galatas near the city of Chania in accordance with his last wishes.

An integral part of the Greek political and musical scene for decades, Theodorakis died last Thursday in Athens at the age of 96.

A farewell ceremony on Wednesday drew officials and ordinary Greeks, who gathered in a light autumnal drizzle outside a central Athens cathedral."He will always be with us, rooted in our collective memory," Greek President Katerina Sakellaropoulou said in a eulogy at Athens's Metropolitan Cathedral.

As part of a three-day national mourning period, Theodorakis had been lying in state since Monday for members of the public to pay their last respects before being transported to Crete by ferry overnight. Thousands awaited him on the island, where the municipal band led the way as his hearse drove to Chania cathedral. There, members of the public lined up to visit his casket, many laying a flower on top and bowing their heads to kiss the coffin.

Hours later, Theodorakis’ body was driven to the church of the village of Galatas, on the outskirts of Chania, where the main funeral service was held. Sakellaropoulou, Prime Minister Kyriakos Mitsotakis, head of the main opposition Alexis Tsipras and other politicians attended the service along with Theodorakis’ family.

Prominent Turkish composer and author Zülfü Livaneli, who worked with Theodorakis on a number of musical projects, was among the attendees of the ceremony along with fellow Greek singer Maria Farantouri.

Theodorakis penned a wide range of work, from somber symphonies to popular TV and film scores, including for "Serpico” and "Zorba the Greek" starring Anthony Quinn as a loveable rogue dancing barefoot on a Cretan beach, to the thumping intensity of "Romiosini" ("Greekness") a series of rousing songs of identity and resistance.

Much of his music was adapted to songs of Greek poets, bringing national prose to the mainstream. His tunes gained widespread popularity, becoming anthems of the political left.

Theodorakis, a longtime member of the Communist Party of Greece (KKE), is also remembered for his opposition to the military junta that ruled Greece from 1967 to 1974, a time during which he was persecuted and jailed and his music outlawed.

Theodorakis joined the resistance against the German and Italian occupation of Greece when he was just 17, during World War II.

Liberation in 1944 was followed almost immediately by civil war between the communists and royalists. Accused of guerrilla sympathies in the war between right-wing royalists and left-wing popular forces after World War II, Theodorakis was arrested in July 1947. He was released in August 1949.

By the time he graduated from Athens Conservatory in 1950, Theodorakis had already been sent to deportation camps on several occasions. At one point, he was sent to the dreaded Makronisos island prison off the eastern coast of Attica, where he was tortured as a "red," had his legs broken and on one occasion was buried alive and left for dead.

After studying music at the Paris Conservatory, Theodorakis entered politics in 1963 after his friend Grigoris Lambrakis, a left-wing lawmaker, was murdered during a peace demonstration. The Costa Gavras film "Z," scored by Theodorakis, was based on the killing. He was elected to Lambrakis's seat in February 1964.

Theodorakis was among the first left-wing politicians to be arrested after the 1967 coup. Pardoned a year later, he was involved in setting up the clandestine Patriotic Front, which led to another detention and a ban on his works.

Theodorakis had a tumultuous relationship with the KKE, leaving it in the late 1960s, rejoining in the late 1970s. He served as a deputy for the newly legalized KKE from 1981 until 1986, but began to have doubts about the left and abandoned politics.

"I'm not a communist or social democrat or anything else. I'm a free man," he told Reuters in an interview during the 1990s.

But he wrote a letter in October to KKE Secretary-General Dimitris Koutsoumbas, essentially entrusting him with the funeral arrangements. "Now, at the end of my life, at the time of taking stock, details are erased from my mind, and the ‘Big Things’ remain. So, I see that I spent my most crucial, forceful, and mature years under KKE’s banner. For this reason, I want to depart this world as a communist,” Theodorakis wrote.

He returned to parliament in 1989, but this time for the conservatives, run by Constantine Mitsotakis, father of the current prime minister. At a time of political scandals surrounding the ruling Panhellenic Socialist Movement (PASOK), Theodorakis helped fellow Cretan Mitsotakis to forge a government in which he served as a minister.

Praising a man he called the "Universal Greek," incumbent Prime Minister Kyriakos Mitsotakis, who had known Theodorakis from childhood, had said: "We had all forgotten that he was a mere mortal. But his legacy of music, his political activism, and his service to the nation in times of crisis lives on."

In his later years, he remained the political activist, railing against harsh reforms imposed on Greece for financial bailouts from 2010 to 2015.

The late composer was born Michalis Theodorakis on the island of Chios on July 29, 1925. His father Giorgios hailed from Galatas whereas his mother Aspasia was a Greek emigre from the modern-day western Turkish resort town of Çeşme.

Reflecting on his roots spanning both sides of the Aegean, Theodorakis promoted closer ties between the two neighbors alongside Livaneli, and authors Aziz Nesin and Yaşar Kemal in the "Turkish-Greek Friendship Society," which was established in 1986. The late artist had a significant fan base in Turkey, where he performed numerous times.

Speaking to Anadolu Agency (AA), Lakis Halkias, a musician friend of Theodorakis, said the composer managed to accomplish his goal to bring different peoples closer through culture and arts since his songs are being sung by the Turkish people.

"Theodorakis used to say that there is a lot that connects Greece and Turkey apart from the Aegean and he believed in this," Halkias said.