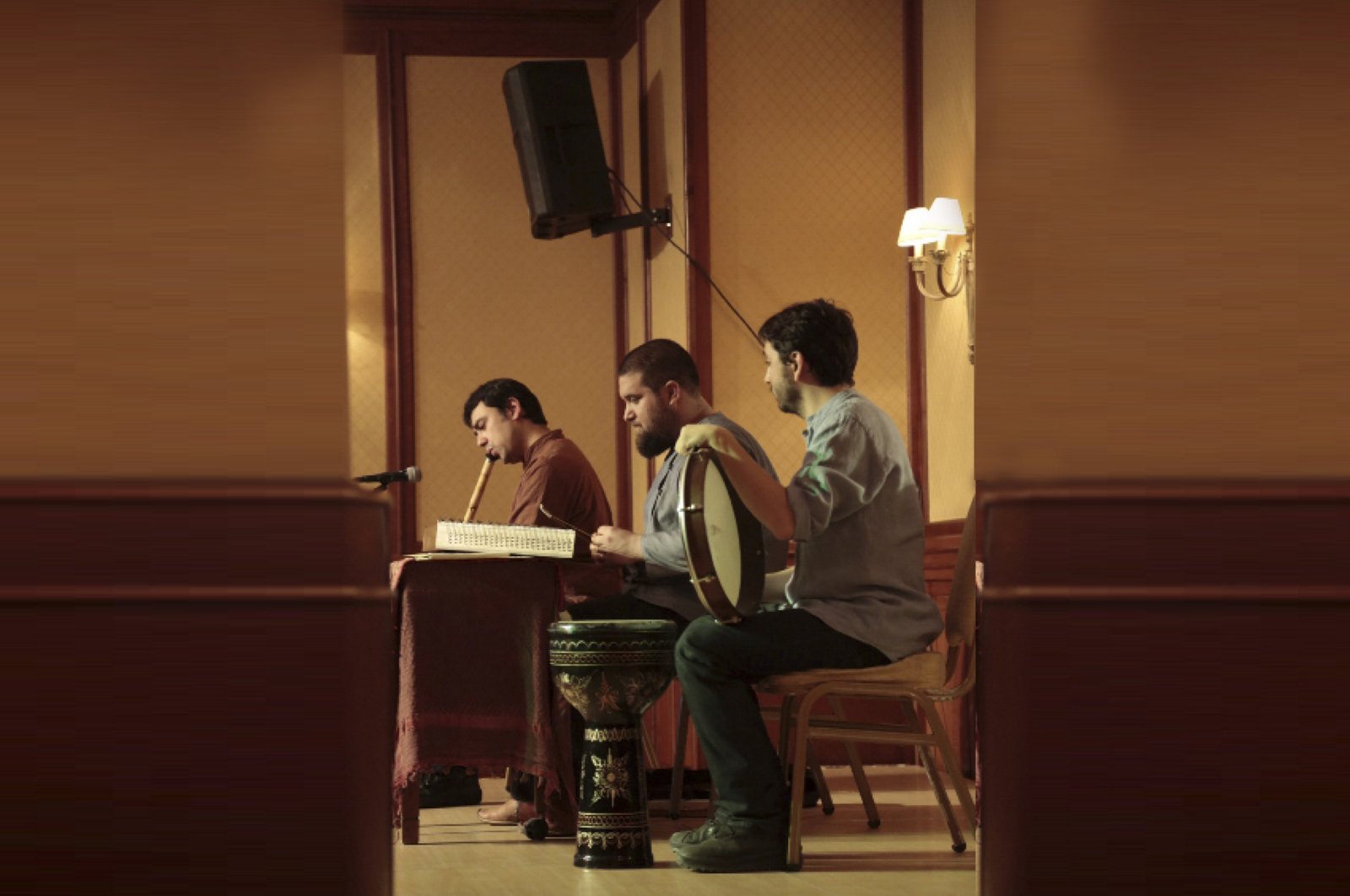 Sedat Anar (M) performs at one of his concerts with his friends. (Courtesy of Sedat Anar)
by Anadolu Agency Apr 03, 2020 1:48 pm
RECOMMENDED

The "Stay at Home" campaign of the Ministry of Health continues as part of measures to slow the spread of the coronavirus in Turkey. Many figures in the culture and arts community support this call, launched with the slogan of “Life Fits Inside the House.” Santoor player Sedat Anar, who has been recording songs in his home for a while, is one of these figures. Anar recently increased his record production at home and presents them to his listeners through his social media accounts.

Anar, who with his wife Damla Anar, started to stay home on the first day that warnings were issued, explained the process to Anadolu Agency (AA).

"One day, with my wife Damla, we were playing the song that I composed for Niyazi-i Misri's poem ‘Gül müdür Bülbül müdür?’ ('Is it a Rose or Nightingale?'). Damla said: ‘Why don’t we record these songs at home?’ Then, we called our friends Ömer Çeşim and Ozan Önel the next day. We did not have a camera. We started to shoot our records with them the next day. We did not use a microphone. Then our records went viral. For example, our ‘Gül müdür Bülbül müdür?’ record was listened to more than 60,000 times."

Anar pointed out that he has a young fanbase and said: "We already converse and maintain dialogues with many of them. Since I started the music on the street, I have never maintained a distance from my listeners like other artists. They love me, and I love them."

Anar gave a concert in Istanbul’s Üsküdar district in January this year. Recalling that it was an unforgettable night for him, he noted that 80% of the listeners were young. "When I see it, I was really happy. These home records are for my listeners. We play songs that are not included in my albums," he said.

The santoor player indicated that the period of recording albums by playing one by one has ended in the world of music. “For example, ECM, the most prestigious music company in the world, makes album recordings in a house, in a church with beautiful acoustics and in nature.”

Anar recorded his first album “Belagat” in his home. Noting that he covered the windows with blankets to prevent any distracting noise during recordings, he stated that this album is the most special one for him. Anar returned to his home-produced records with his latest album “Santur” ("Santoor"). “I think the most important feature of home records is that they are sincere. It also adds a different flavor to visually see how the musicians perform their music."

Underlining that he always believes in the healing power of art, Anar said: “We all spend our days at home to prevent the virus from spreading during these difficult times. Now I'm in Şanlıurfa province’s Halfeti, the village where I was born and raised. When my father watches the news on TV in the evening, I am watching it as well. Sometimes I am so affected by it. It is not possible not to worry. Thousands of people are dying. When it comes to being happy in such hard times, I think there is a lot of work for art here. Everyone organizes home concerts. Since people cannot leave their homes, they are motivated and happy when they watch a live home concert. These organizations should not be limited to concerts. For example, a theater actor can act out short single plays. Those who are experts in fields such as literature, science, painting and history should have live broadcasts. Art exists to make people forget the evils in the world.”