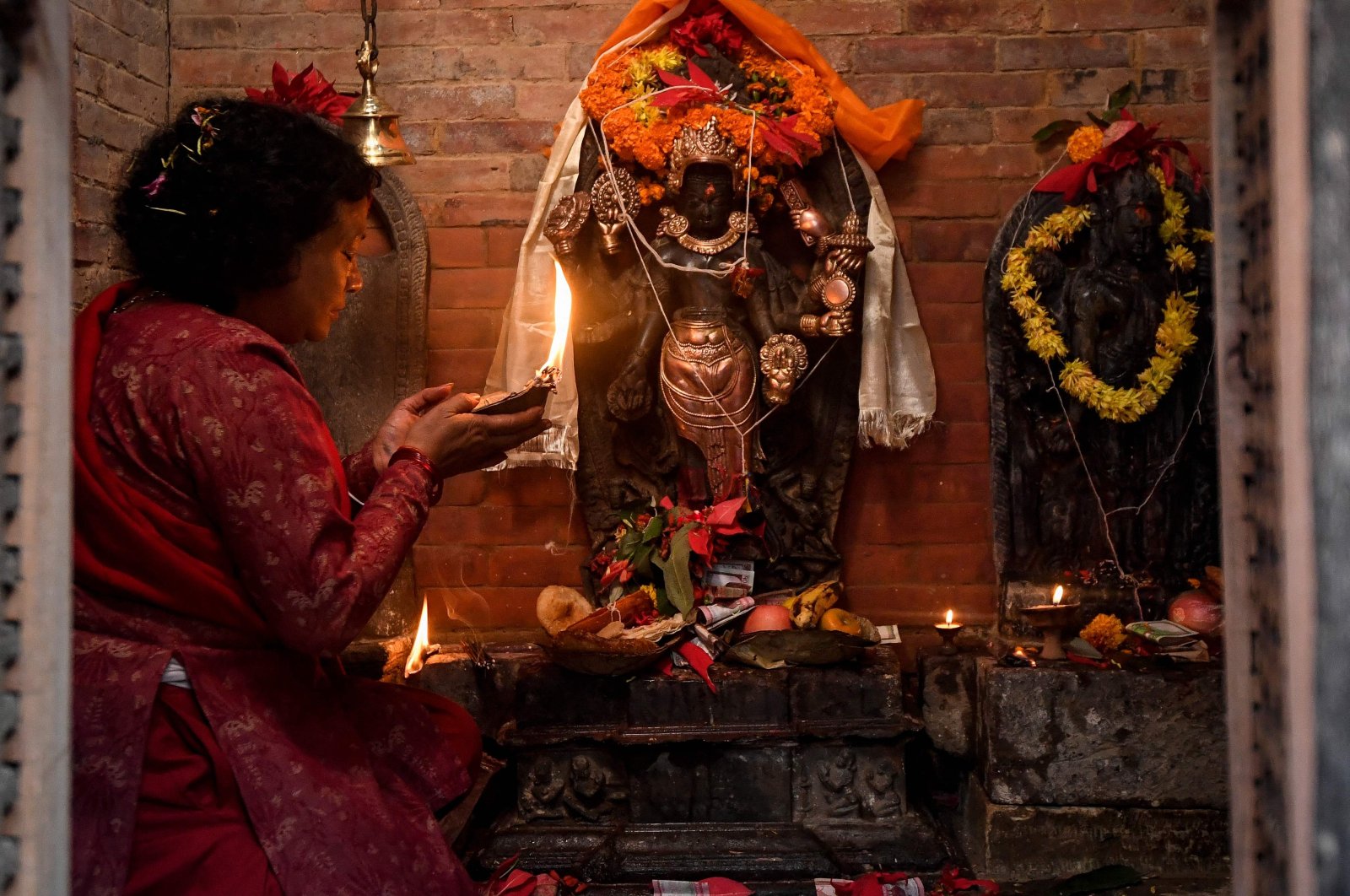 A devotee performs a prayer ritual before a centuries-old sculpture of a Hindu god that was reinstalled nearly 40 years after it was stolen, at its temple in Lalitpur, on the outskirts of Kathmandu, Nepal, Dec. 4, 2021. (AFP Photo)
by French Press Agency - AFP Dec 05, 2021 2:58 pm
RECOMMENDED

A stolen, centuries-old Nepali sculpture of two Hindu gods that was taken from its home some 40 years ago and later found in the United States, has now been returned to its rightful place, as it was reinstalled at its temple in the Nepali capital Kathmandu.

The stone statue of the gods Laxmi and Narayan was repatriated to Nepal in March by the Dallas Museum of Art and the FBI after a monthslong investigation by Nepali and American activists and officials.

It was taken from the temple in 1984 and appeared on display at the Dallas museum six years later, on loan from a collector.

The work, dating back to between the 12th and 15th centuries, is one of a handful of cultural artifacts returned to Nepal from foreign museums and collectors this year.

A priest chanted prayers and locals played traditional music as the statue was carried in a palanquin back to the pagoda-style temple, which was draped in marigold garlands to welcome the work.

It was placed back on its original stone plinth, with a replica that locals had been worshipping instead moved to stand alongside.

"We are very happy. Our efforts of three to four years have been fruitful, everyone is celebrating," said Dilendra Raj Shrestha of the Nepal Heritage Recovery Campaign.

Laser sensors and CCTV cameras have now been installed in the temple to protect the statue, he added.

"We are seeing the beginning of a trend, to bring back Nepal's gods from the U.S., from Europe, from other countries where they have now ended up," said the U.S. Ambassador to Nepal Randy Berry.

"I hope this is the first of many such celebrations," he added.

Nepal is deeply religious and its Hindu and Buddhist temples, as well as heritage sites, remain an integral part of people's everyday lives.

But many sites are bereft of centuries-old sculptures, paintings, ornamental windows and even doors, which were often stolen after the country opened up to the outside world in the 1950s.

Many pieces were taken with the help of corrupt officials to feed art markets in the U.S., Europe and elsewhere.

"I think there is a global change ... Many countries are demanding their artifacts back and Nepal is in a great position legally because export was never permitted," said arts crime professor Erin L. Thompson.

A tweet by Thompson questioning the statue's origin and history had prompted the investigation into the sculpture.

Six pieces have been returned to Nepal this year and authorities are seeking more from France, the U.S. and Britain.