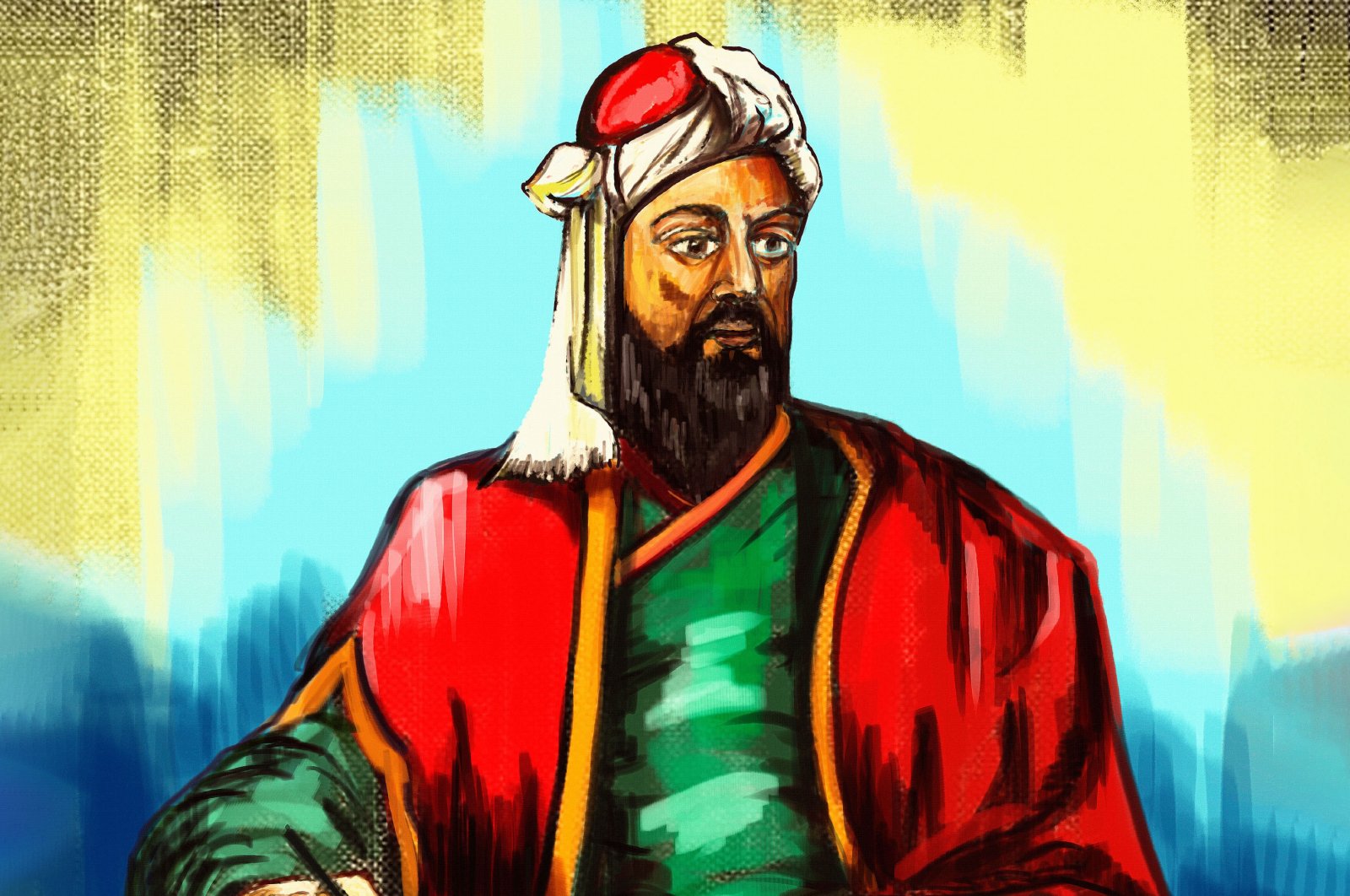 Nizam al-Mulk's name is engraved in history as one of the greatest statesmen of the Islamic and Turkish world, as he left behind a formidable legacy after serving as vizier to Seljuk Sultan Alp Arslan and his son Sultan Malik-Shah I for 29 years

Ismailism, which is a branch of Shiite Islam, gets its name from Imam Isma'il ibn Jafar, the eldest son of Imam Ja'far al-Sadiq. Growing up fighting the Sunni Abbasids, Ismaili Muslims spread their thought with the missionaries they called “da'i.” In 909, they established the Fatimid state based in Cairo but the dynasty split after the death of the Fatimid caliph Al-Mustansir Billah in 1094.

After the death of his caliph father, Abu Mansur Nizar ibn Al-Mustansir would succeed to the caliphate as the eldest son. However, the military strongman Al-Afdal Shahanshah announced his brother Abu'l-Qasim Ahmad ibn Al-Mustansir as the caliph, ignoring the claims of Nizar.

Nizar rebelled against his brother but he was defeated and taken prisoner in Cairo, where he was killed through immurement (being sealed in an enclosed space with no exits). Thereupon, the supporters of Nizam, that is Nizari Ismaili Muslims who were mostly living in Iran and Syria, separated from others to form the Nizari brand of Ismailism.

Meanwhile, Hasan-i Sabbah was born in Qom in Iran to a Shiite family. He was an Iranian nationalist rather than a Muslim. He met the Ismaili branch in Ray, where he moved with his family. After joining this group, he started to act as an Ismaili da'i. He took lessons in Egypt and became a supporter of the Nizari. He also hated the Turkish domination of Iran, which began with the Ghaznavid and Karakhanid dynasties and culminated with the Seljuks.

Returning to Iran from Egypt, Hasan-i Sabbah developed new tactics based on rebellion and assassination to fight against the Seljuk Turks. He, with his men, began to look for a base to establish his headquarters. He settled on Daylam, which was dominated by Zoroastrianism during the pre-Islamic period and was beyond the reach of the Seljuks.

He was planning to seize the Alamut castle here and started to gather supporters by sending his da'is to this town for propaganda.

Such activities of Hasan-i Sabbah did not escape the attention of the Seljuk statesman Abu Ali Hasan ibn Ali Tusi, better known by his honorific title of Nizam al-Mulk, meaning “Order of the Realm” in Arabic. He told his son-in-law, Abu Muslim, who was the governor of Ray, to arrest this man with sneaky plans.

However, Hasan managed to flee and infiltrate the Alamut castle in September 1090. He took over the castle from the Shiite commander together with the Ismailis, following his orders. Thus, even four years before the death of the Fatimid caliph Al-Mustansir Billah, a Nizari Ismaili state was established.

The Seljuk vizier Nizam al-Mulk wanted to strangle Hasan-i Sabbah, a snake who terrorized innocents with his da'is, whom he called “fidaʽi” or "self-sacrificers." He advised Sultan Malik-Shah the first to send an army against these assassins who were spreading to Rudbar and Quhistan.

Thereupon an army set out under the command of Emir Arslantaş, reached Alamut in Cemaziyelevvel, the fifth month of 485 in the Islamic calendar, and besieged the castle. The siege was prolonged as the Ismailis in the surrounding area came to help Hasan-i Sabbah.

Hasan-i Sabbah knew that his greatest enemy was Nizam al-Mulk and that the pressure on them would be removed with his disappearance. As a matter of fact, in the month of Ramadan, he sent one of his fidaʽi to snatch Nizam al-Mulk, who was going to Baghdad from Isfahan with Sultan Malik-Shah I.

Disguised as a dervish, this young fidaʽi stabbed Nizam al-Mulk in the heart near Nahavand. When the vizier was brought back to his tent after this incident, he was seriously injured. Hearing about the assassination, Sultan Malik-Shah I came to the vizier’s tent and recited the Quran into his ear. Nizam al-Mulk passed away, listening to these divine verses.

As aforementioned, the real name of Nizam al-Mulk, who was buried in the madrassa he had built in Isfahan is Hasan, like his rival. He was born in Tus in 1018 and lost his mother at a young age. He studied in Nishapur, Bukhara, Gazne and Khorasan along with his birthplace.

Although it is claimed that he studied in the same class with Hasan-i Sabbah, this is nothing but a legend. He worked in various civil services. He also worked as a clerk for Sultan Alp Arslan's father Chaghri Bey in Merv and won his affection.

Nizam al-Mulk was one of the greatest statesmen of the Islamic and Turkish world. He served as vizier to Seljuk Sultan Alp Arslan and his son Sultan Malik-Shah I for 29 years. He had a great influence on the victory of Manzikert, fought between the Byzantine Empire and the Seljuk Empire in 1071.

The Sultan Malik-Shah I saw him as a father as he had a great share in his accession to the throne. Thanks to him, the Seljuk army became the strongest army of the time. He reorganized the palace and central government organization, courts based on Islamic principles and the land system. He built hospitals, mosques, madrasas and lodges.

Nizam al-Mulk's most famous work is the "Siyasatnama," or "The Book of Politics." In the book, Nizam al-Mulk gives advice to administrators by analyzing the administrative, financial, political, military, social and cultural dimensions of Turkish-Islamic states.

Nizam al-Mulk says power does not last with oppression as he narrates the following hadith, a saying of the Prophet Muhammad: “Everyone who rules over the servants of Allah in the world will be brought with their hands tied on the Day of Judgment. If he acted justly, his justice loosens his hands and he enters Paradise. If he has wronged, he will be thrown into Hell with his hands tied.”

Nizam al-Mulk veraciously fought against false sects such as Mu'tazila and Ismailism thus making Sunnism, that is the Ahl as-Sunnah creed, which was the way of the Prophet Muhammad and his Companions, dominant in society. His book on politics, in the same vein, shows the importance of a clean and correct creed, for the survival of the state.

Sultan Mahmud writes that his son Mesud, Sultan Tughrul and Alp Arslan did not give way to Christians, Zoroastrians, Shiites, Rafidis and Batinids to reach their rank and self, and that people of these superstitious creeds did not have the audacity or courage to appear before Turks. Then he quotes the following words of Sultan Alp Arslan.

“The people of Iraq are mostly of bad sects, bad religions, bad faiths and are supporters of Daylam (a region of Iran in which Nizari Ismailism was dominant). The enmity and conflict between the Turks and Daylam do not belong to today. Holy and Almighty Allah, has exalted the Turks because they haunted the Daylamites. By the grace of holy and almighty Allah, the Turks are of pure religion. They are people of whims and Bid'ah (heretical innovations) and of evil madhab (school of jurisprudence). As long as they are helpless against the Turks, they show obedience. If weakness occurs in the affairs of the Turks, they gain strength and try to take revenge on the Turks.”

Even though his statesmanship was at the forefront, Nizam al-Mulk was also a Hafiz, the name of those who have completely memorized the Quran, and a scholar of Islamic jurisprudence and hadith.

He took hadith lessons from great scholars such as al-Qushayri. He gathered the greatest scholars of the time in the science councils he established in Rey and Baghdad. He established madrasas, institutions of higher education, in various cities in order to strengthen the Sunni creed and to train the officials needed by the state.

He had the madrassa in Nishapur built for Shafi'i scholar, Al-Juwayni, also known as Imam al Haramayn, meaning "leading master of the two holy cities," that is, Mecca and Medina. In Baghdad, he also established the Nezamiyeh madrassa, named after him, for Abu Ishaq al-Shirazi whom he greatly respected.

The biggest proof that he was a very farsighted scholar is that he discovered Imam Ghazali, one of the foremost Islamic scholars in history, and appointed him professor to this madrassa.

Nizam al-Mulk would be busy with state affairs until noon. In the afternoon, he would listen to the public's petitions. He was very compassionate towards people.

While Nizam al-Mulk was working beside an emir, a high-ranking military or political official, in his youth, a dervish had come to him. "Serve those who will benefit you. Do not serve those whom the dogs will tear to pieces tomorrow,” he said.

Nizam al-Mulk did not understand what the man had meant. However, that same evening, the emir got drunk and went out to his garden, where he was torn to pieces by his own dogs, Nizam al-Mulk had understood the message that the dervish was trying to relay.

He started to look for a mentor for himself. He participated in the conversations of great Sufis such as Abu Sa'id Abu'l-Khayr.

The real teacher who guided Nizam al-Mulk was Abu ali Farmadi, one of the most famous sheikhs of Khorasan, not only in the external sciences but also in the spiritual sciences. When his teacher came to visit him, Nizam al-Mulk would make him sit in his own chair, not in the guest chair like other sheikhs, and he would kneel before him. "Hasan prevents corruption and is kind to Muslims," Farmadi had said about him.

Nizam al-Mulk led an almost altruistic life thanks to his teacher as he constantly helped the ulema and the sheikhs. So much so that one day, the treasurer of Sultan Malik-Shah complained about him to the Sultan for giving 300,000 dinars to Islamic jurists and Sufis every year. Malik-Shah asked his vizier why he did so, and Nizam al-Mulk answered as follows.

“You spend twice as much on soldiers every year; however, the arrow shot by the strongest and most accurate of them does not go further than a mile. They can only kill people close to them, with the swords in their hands. I, on the other hand, equip such an army with the money I spend that their prayers go up to the Heaven like arrows and nothing can prevent it from reaching Allah.”

Upon these words, Malik-Shah wept and demanded he increase the numbers of this army. As a matter of fact, the Seljuk state collapsed, but this army supported by Nizam al-Mulk laid the foundations of the Ottoman Empire in Anatolia.

With their pure Ahl as-Sunnah beliefs that they did not contaminate with philosophy, Turks became the most powerful state in the world and buried the Byzantine Empire in history.