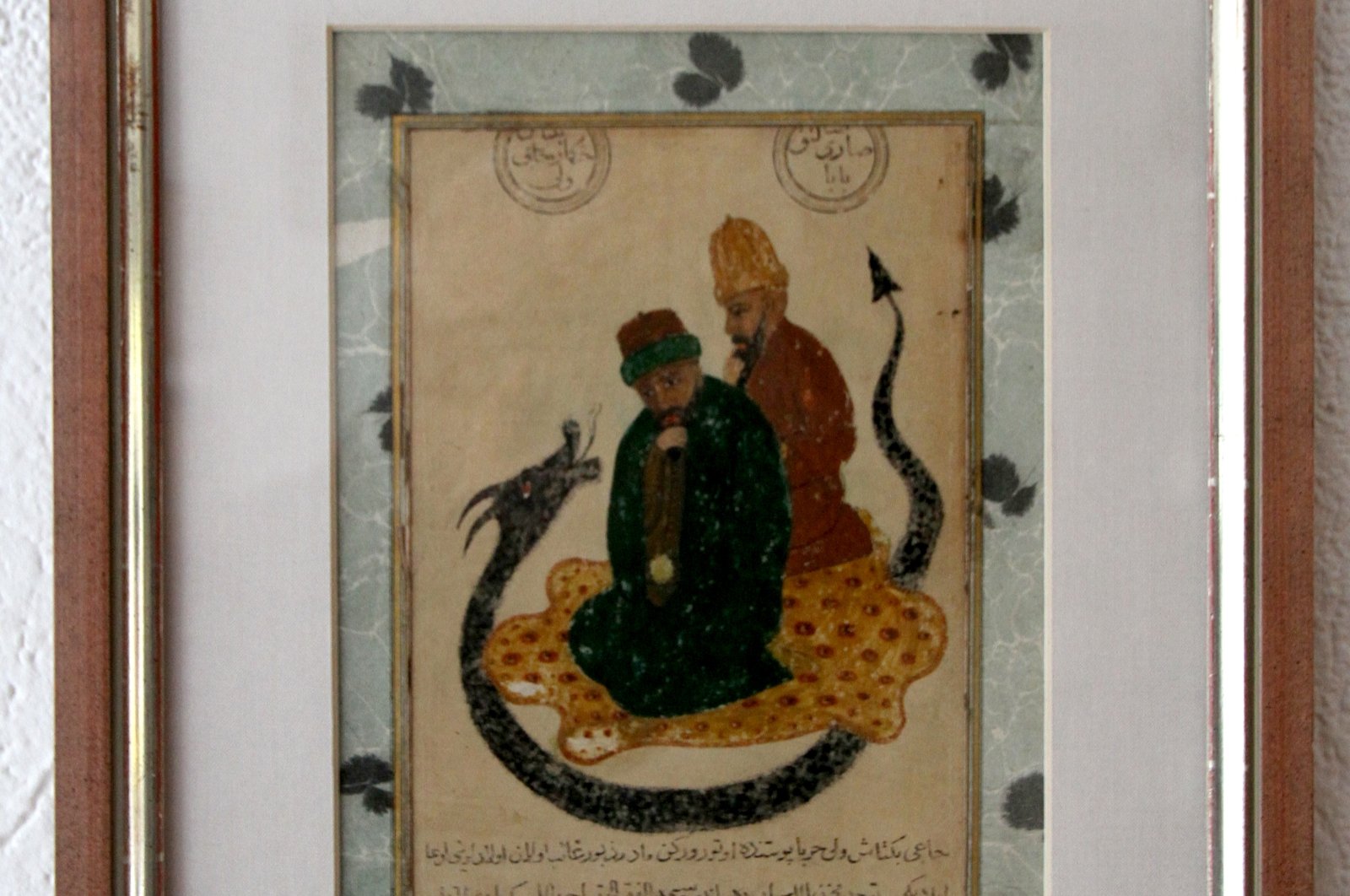 While Haji Bektash Veli lived and taught in Anatolia in the 13th century, it looks like the oldest painting depicting him comes from the 17th century

A historical painting depicting Muslim philosopher Haji Bektash Veli went under the hammer at an auction held in Germany this week. Purchasing the work, Mehmet Tütüncü, the head of the Netherlands-based Research Center for the Turkish and Arab World (SOTA), said that the painting may be the oldest one belonging to the philosopher.

Attending an auction during his business travels in Germany, Tütüncü came across a painting of Haji Bektash Veli, which excited him. When he examined the work, he saw that the painting, 22 by 17 centimeters (8.7 by 7 inches) in size, portrays two men sitting on an animal skin with a snake around them. The Ottoman caption below the painting revealed that the man on the right side is 13th-century dervish Sarı Saltuk Baba while the figure on the left is Haji Bektash Veli.

Tütüncü said that he realized this work could be the oldest painting of Haji Bektash Veli when he read the Ottoman caption below it. According to him, the caption reads: “The painting, which is made by calligrapher Ahmed from Üsküdar in 1651, is about a snake/dragon that loses its younger snakes/dragons and asking them to Haji Bektash Veli while he is sitting on a chameleon skin.”

Pointing out that the painting he bought is an important piece, Tütüncü said: “All of the original paintings at the Haji Bektash Veli Museum in Turkey’s central Nevşehir province are from the late 19th and early 20th centuries. The presence of such an old painting and the fact that it bears a realistic scene is undoubtedly of great importance. Here, a painting of Haji Bektash Veli in the mid-17th century undoubtedly reflects a tradition.”

He added: “Another element that makes this picture important to me is the involvement of Sarı Saltuk Baba. It is not only a painting of these two precious figures; it tells a story. This work is probably a part of a larger book.”

Touching on the details of the painting, Tütüncü noted: “On a yellow background, Haji Bektash Veli and Sarı Saltuk appear to be sitting on an animal skin with brown spots. In the painting, Haji Bektash Veli, wearing a green turban, holds his beard with his right hand. He also wears a green coat made of aba fabric and a brown cap. On his chest, the necklace that the dervishes of Bektaşi Order, the religious order of Alevism named after Haji Bektash Veli, wear is seen. He is surprised to hear the snake's complaint. Sarı Saltuk Baba is also sitting behind Haji Bektash Veli. Dressed in a brown coat made from aba fabric, he wears a crown that is one of the most significant symbols of the Bektaşi Order. He has a bushy and black beard. He makes a sign expressing silence with his forefinger.”

According to him, the animal depicted as a snake or dragon has a golden pointed ear, big eyes and fork tongue. Tütüncü recalled that this figure was used a number of times by Ottoman traveler Evliya Çelebi and Haji Bektash Veli in their works.

He said that it is important that UNESCO declared 2021 as the Year of Haji Bektash Veli all around the world to commemorate the 750th death anniversary of the philosopher. Emphasizing that the philosopher is valuable in Turkish culture, Tütüncü added: “Haji Bektash Veli is a very important historical figure. He is also the mentor of the Janissaries, the most important elite infantry of the Ottoman army. He is an important element of our Alevi and Bektashi culture.”

Noting that Haji Bektash Veli is the greatest Turkish philosopher of the 13th century and the eponym of the Bektaşi order, the UNESCO website says for the philosopher: “The base of his philosophy lies on humanity, human rights and social equality that he counsels for the man to be modest, to purify his soul, to mature, to abstain from showing off and to be full of the love of God. His principles lead to cultural harmony and enlightening in Anatolia.”