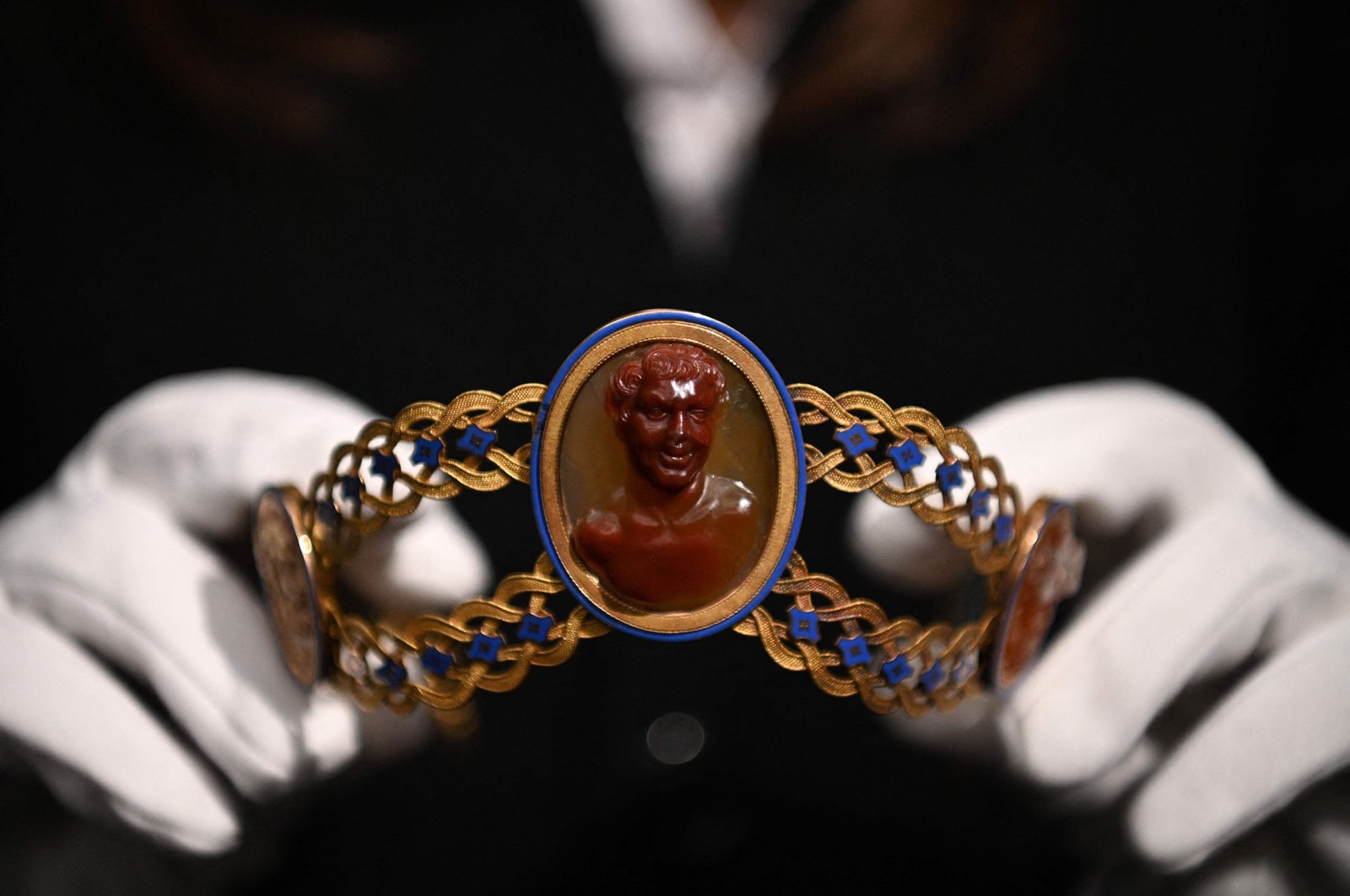 A gold, cameo and enamel diadem by Jacques-Amboise Oliveras, circa 1808, believed to have belonged to Empress Josephine Bonaparte of France, is displayed during a photocall at Sotheby's Auction House in London, U.K., Dec. 3, 2021. (AFP Photo)
by French Press Agency - AFP Dec 07, 2021 6:04 pm
RECOMMENDED

A pair of centuries-old tiaras encrusted with jewels and believed to have belonged to the French Emperor Napoleon Bonaparte's first wife Empress Josephine, sold at an auction in London on Tuesday for nearly 600,000 pounds ($795,000).

The two tiaras – offered from a private British collection dating back at least 150 years – are thought to have been given to Napoleon Bonaparte's wife by his sister Caroline early in the 19th century, according to Sotheby's.

Both headpieces, each part of a parure – a set of matching jewelry designed to be worn together – are set with gemstones engraved with classical heads, several of which are possibly ancient, the auction house said.

The more ornate of the duo – comprising carnelian, enamel and gold – fetched 450,600 pounds, while the other sold for 126,000 pounds, as part of a "Treasures" sale of various valuable and rare items.

"These majestic jewels mounted with cameos and intaglios certainly evoke the style of the grand Empress Josephine – her rank as wife of Napoleon Bonaparte, her impeccable taste and her interest in the classical world," said Kristian Spofforth, of Sotheby's.

"The jewels offered here demonstrate the finest delicate work by the finest French workshops, and, today, there are hardly any comparable pieces in the world.

"When fashions changed, jewelry was broken up and re-modelled, making their survival a truly exceptional one."

Josephine Bonaparte was likely given just the engraved gems, which Sotheby's said were a possible combination of Roman examples dating back to as early as 100 B.C. as well as more contemporary Italian engravings.

The auctioneers believe the jewels were then mounted for her in the French capital in around 1808 in the neo-classical style, citing marks on the crowns pointing to Paris and its famed goldsmiths of the age.

They were believed to endow the wearer with their various depicted qualities such as heroism, faithfulness and love, all while blazing a trail in the fashion world of the day.

"By being the first to incorporate these cameos and intaglios into her dress, wearing them side by side with pearls and diamonds, she created an entire new fashion that swept Paris and the world, based on neo-classical forms," explained Spofforth.

No details were immediately released Tuesday on the identity of the buyers.

Sotheby's said the tiaras were possibly acquired from Josephine or her estate by British landowner, art collector and politician Edward Lascelles, and then passed on to his descendants.