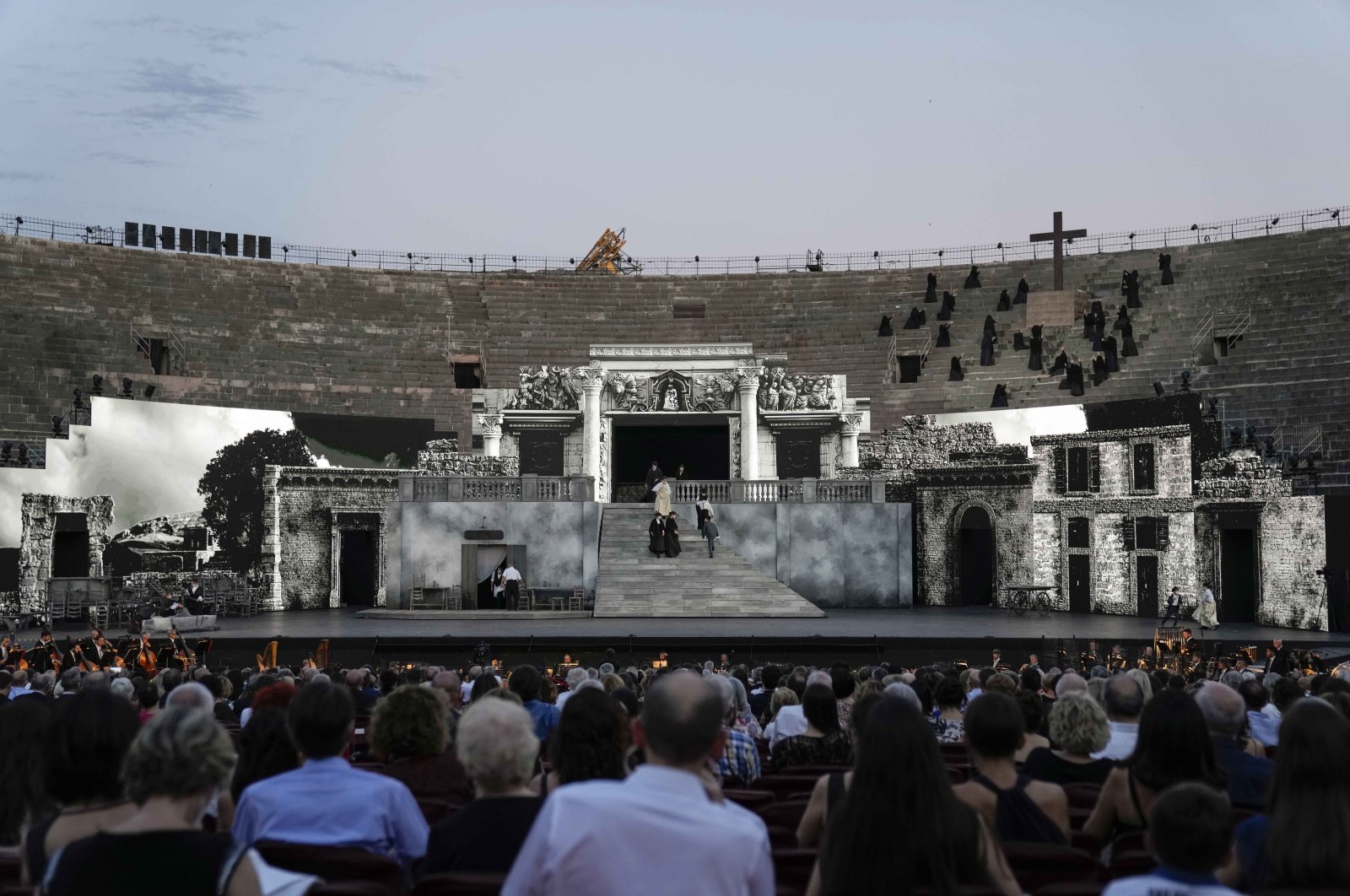 It has been a long year without in-person events and with the vaccinating campaigns gearing up, the art world is also springing back into action. In that vein, northern Italy's famous Verona Arena amphitheater has returned to staging full operas for the first time since the COVID-19 pandemic, but there is a catch in the form of virtual sets.

The monumental sets that normally fill the vast amphitheater stage have been replaced by dynamic, 3D images broadcast on huge LED screens, recreating a Sicilian village or a Fellini-esque film backlot.

Distancing rules meant that stagehands moving sets had to be limited in the cramped backstage in the open-air Roman-era amphitheater, setting in motion a reimagining of the 98th Verona Arena Opera Festival.

For this season, technology is standing in for the sets for which the Arena is famous, ones big enough to fill the vast stage and engage even audience members sitting far away in the uppermost seats.

"We understood already last year in November that we needed to have another plan, in the eventuality that we couldn't use the big sets,'' said the Arena's general manager, Cecilia Gasdia. "After all, the Verona Arena is used to doing huge shows, a little pharaonic, with great artistic quality."

"They are artists and technicians at the same time, and that is not easy,'' Trespidi said. "This is a great innovation; innovations need time to take hold. The process that we started today we don't know where it will take us. Certainly, it will take us forward."

Friday's season-opening premiere was a double-bill of Pietro Mascagni's "Cavalleria rusticana" and Ruggiero Leoncavallo's "Pagliacci," a production planned for the 2020 season that was never staged due to restrictions that limited performances to concerts. In fact, wooden sets for last year's "Cavalleria" remain unfinished at the Arena's cavernous workshop at the edge of the city, set aside for perhaps a future edition.

Instead, a Sicilian village was created on 400 square meters (4,305 square feet) of LED screens, with projections of a hillside, a church facade and craggy buildings, all with three-dimensional depth. Moving clouds gave the scene dynamism, while singers and actors moved up and down a physical staircase and through a foreground filled with tables and chairs to create a central piazza.

While "Cavalleria rusticana'' was nostalgically staged in black, white and gray, the "Pagliacci'' cast was dressed in bright technicolor costumes, against a more spare backdrop inspired by a Fellini film set, and underlining the collision of real life and theater in the opera.

The video component also includes cameo imagery from Italian museums in each of the five new operas, including also "Aida," "Nabucco" and "La Traviata." The collaborations, including with the Vatican Museum, the Uffizi and Turin's Egyptian Museum, are meant as a gesture of solidarity with another cultural branch that also suffered from restrictions during the pandemic.

"They found this wonderful solution that works very well," said tenor Yusif Eyvazof, who is singing the role of Canio/Pagliaccio. "It is really so beautiful to see, that you don't see it is not a real set. And the audience can see a real show, and not just a concert."

Eyvazof said the screens had an added benefit: "It is very comfortable for the voice. It is a wall, that gives also acoustic support, and this is very important in the Arena, because we sing outdoors."

Ongoing virus restrictions mean that the Arena, for now, can seat a maximum of 6,000 guests, instead of the pre-pandemic 13,500. Orchestra musicians are separated by two-meter distances, the chorus is spread stage left in the amphitheater seating like a Greek choir, and non-singing cast members wear masks when the stage grows crowded.

For many in the crowd, just seeing live theater was a treat, and the new technology a new element to absorb.

"Even being used to the big sets of the Arena, it is still very beautiful,'' said Guia Veronese, a regular at the Arena whose 8-year-old son was singing in the Pagliacci boys' choir. "It almost seems real at a certain point."