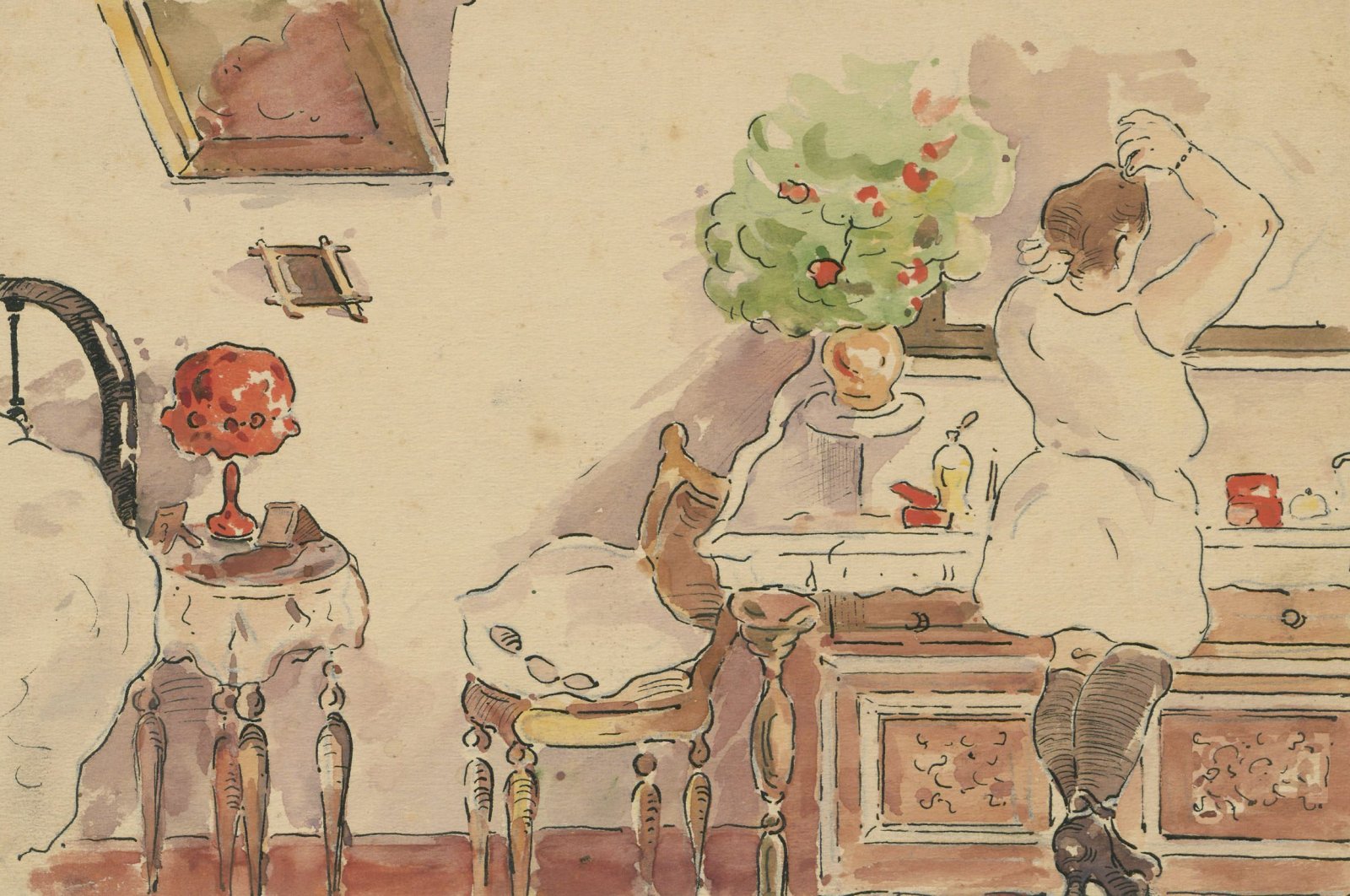 A work from the "Painter Sabiha Rüştü Bozcalı" exhibition at Salt Galata in Istanbul.
by DAILY SABAH Mar 06, 2020 1:15 pm

To emphasize the meaning and importance of International Women's Day on March 8, we have compiled a list of seven prominent female Turkish painters as extraordinary examples of women's achievements in the arts

Women have played crucial roles in every period and society. According to anthropologists, civilizations in ancient societies were started by women. It was women who devised the first rope, made pots and pans out of stone and clay, found plants to eat and use as medicine, discovered fire and domesticated animals. All of these achievements work to demonstrate women's innate creativity.

Women in Turkish society have used this creativity. While expressing themselves in various areas, they have also been present in the arts, for instance, in weaving carpets and rugs, lace making, embroidering and more.

As a result of the Westernization movements that have prevailed since the 18th century, Turkish art, which followed the traditional line, became heavily influenced by Western art. Thus, the process that has lasted to present day and called contemporary Turkish art has emerged. Also in this contemporary art period, Turkish women's presence in art continued, and they made their voices heard. As International Women's Day on March 8 approaches, we have compiled the stories of female artists who have been influential in Turkish painting.

Mihri Müşfik
Born in Istanbul in 1886, Mihri Müşfik received a European-style education and was interested in literature, music and painting. She died in New York in 1954 at the age of 68. She worked as a painting teacher at Istanbul Darülmuallima (Teachers’ College for Girls) in 1913 and as an instructor and manager at Istanbul’s first Academy of Fine Arts for Girls (İnas Sanayi-i Nefise Mektebi). She trained many female artists, including Nazlı Ecevit, Aliye Berger and Fahrelnissa Zeid.

The artist, known as the first contemporary Turkish female painter in Turkey, combined European and Turkish styles with charshaf and straw hats with flower figures and elegant shoes. She was active in the painting workshops for girls at that time with her strong will and wit. She was an artist with solid patterns who received painting lessons from Fausto Zonaro, the palace painter during the reign of Sultan Abdülhamid II. She concentrated on portraitures and figures in her paintings. Her portraits bear the traces of cubism and expressionism, which were the currents styles of her time. As a portrait painter, her freeness in her brush strokes and her use of light is remarkable.

Müfide Kadri
Müfide Kadri is a painter who lived between 1889 and 1912 and managed to carve out a niche for herself among female painters of her time in her short life. When her paintings were exhibited by her father after her death, her superior ability in painting was revealed. Kadri was a highly educated painter who received watercolor and charcoal drawing lessons first from Osman Hamdi Bey, and then from Italian professor Valeri, a teacher at the Academy of Fine Arts. She taught painting at Istanbul Girls High School and was the first Turkish female artist to receive an award. A member of the Ottoman Society of Painters, she won an award for a painting at an exhibition in Germany. Apart from painting, she was also interested in music and composed songs. When one looks carefully at the paintings by the artist, who worked on portraits, landscapes and still life, it is possible to feel her poetic manner and sensitivity in all of them. Her portraits, in particular, reveal the outer appearance of the model as well as its inner world.

Celile Hikmet
Born in 1880, Celile Hikmet began her painting life at an early age thanks to the affinity of her family to the Ottoman palace and the painting education she received from Zonaro, the palace painter of that time. Hikmet, the daughter of Enver Paşa and Leyla Hanım, stepped into this profession, which was unpredictable and impossible for a woman of her time, with an interest in art that she inherited from her family. In general, even though she painted still life, Hikmet was a portrait painter in a literal sense. Hikmet, who hardly used thick opaque paint, made paintings dominated by pastel colors. In her portraits, she often addressed her friends and relatives in the family and from a pictorial point of view, the expression in these portraits is reinforced by looks and postures, and this is the main element that strengthens her paintings.

Nazlı Ecevit
Nazlı Ecevit, one of the first students of İnas Sanayi-i Nefise Mektebi (the School of Fine Arts for Women), which opened for female students during the Constitutional Monarchy Period and provided education in the field of fine arts, succeeded in creating successful and original compositions on canvas by experimenting with different styles of painting. Ecevit worked mostly in oil paintings, watercolors, pastels and charcoal, and she often painted landscapes and nature paintings.

Sabiha Bozcalı
Sabiha Bozcalı is the first female painter to study painting in four different countries and to study the subject of industrial production in her works. When Bozcalı returned home, she graduated from Sanayi-i Nefise Mektebi, completing her educational life successfully in her own country. Bozcalı was also awarded a scholarship to become a student of the painter Paul Signac in Paris. Then she gained a worldwide reputation. She added fame to her painting career by making paintings that adorned the walls first in the Egyptian palace and then in the Papal Museum in Rome.

Aliye Berger
Aliye Berger, who is the sister of Fahrelnissa Zeid and Cevat Şakir Kabaağaçlı (aka the Fisherman of Halicarnassus), started her art life by playing the violin first. It was not surprising that she was inclined to painting because her brother was a painter. She gained a unique reputation with her painting that won first place in a competition she participated in. Berger, who has worked in pattern, oil painting and engraving techniques in black and white intermediate tones, won international awards during her career, such as a 1954 competition launched by the International Association of Art Critics for her painting “Güneş” (The Sun) and second prize in the 1955 Tehran Biennial.

Fahrelnissa Zeid
Fahrelnissa Zeid was born "Fahrünnisa Şakir" on Jan. 7, 1901, on Büyükada in Istanbul to an elite Ottoman family. She was fond of drawing and painting from early childhood and her family supported her education. Zeid became a part of the D Group, a group of avant-garde painters in Turkey, and opened her first solo exhibit in Istanbul in 1944. That period is generally referred to as her first period of artistic creation and labeled with miniature-like paintings. Her works showed major influences of the Turkish classical painting, Byzantine mosaics and European avant-garde.