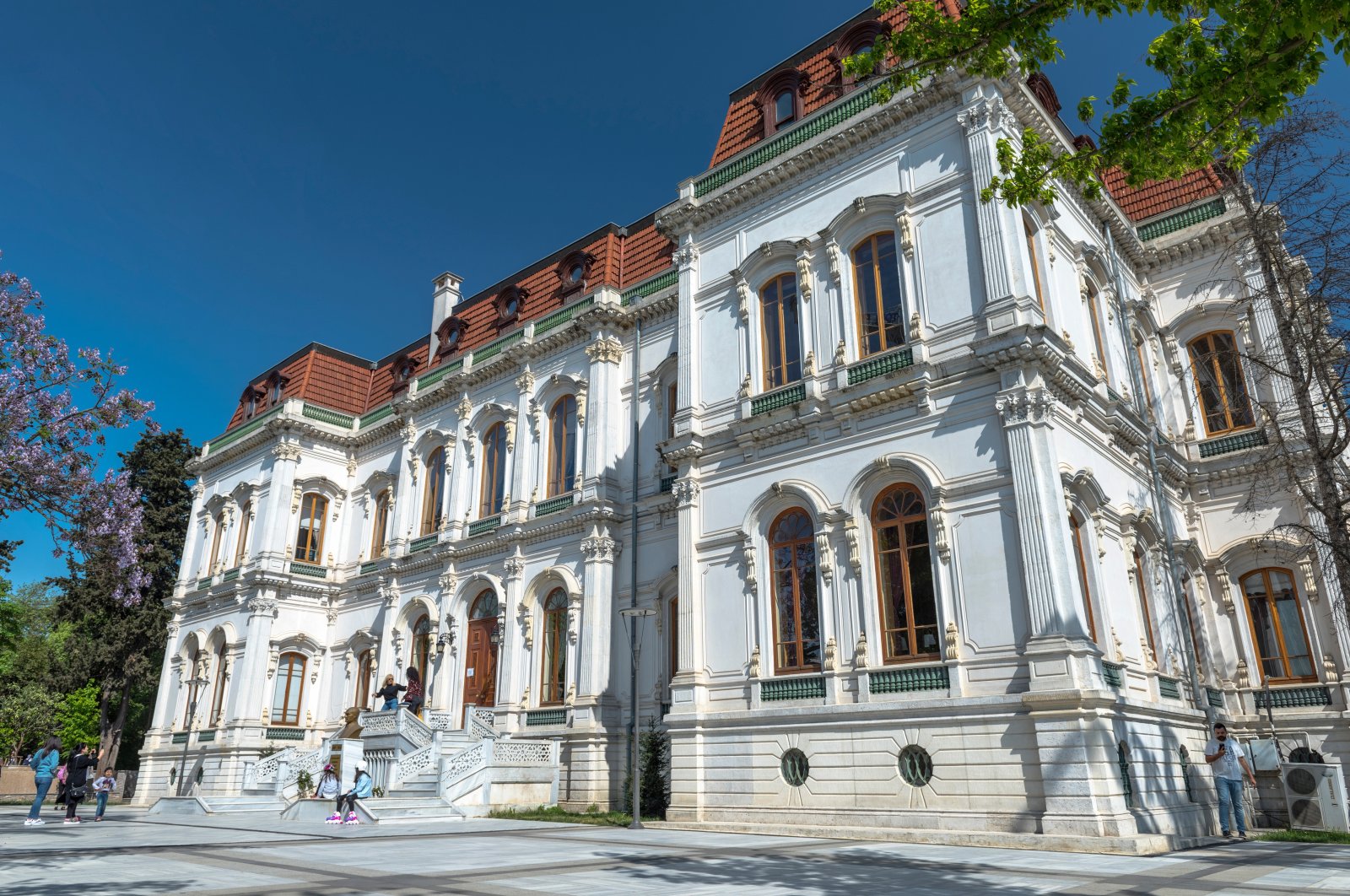 A lesser-known figure of the Ottoman Empire, Adile Sultan was the first female poet whose poems were combined in a diwan

The life stories of the wives and daughters of the Ottoman sultans have always been a subject of great curiosity. Many of them, including Hürrem Sultan, Mahpeyker Kösem Sultan and Nurbanu Sultan, have been the subjects of novels, paintings, TV series and films. One of the lesser-known among them is Adile Sultan.

When the poems of poets in classical Turkish literature reach a certain number in terms of type and form, they are combined in a single book which is called a "diwan." Adile Sultan is the first woman poet whose poems reached the size of a diwan in the Ottoman Empire.

With her generosity, benevolence, honesty and many other virtues besides her artistic features, she was one of the most powerful female figures of the empire in the 19th century.

Sultan Mahmud II had 36 children. This high number was due to the high infant mortality rate in those years. While 30 of the children died in infancy, the sultan had six children who survived – two sons and four daughters. The sons were Sultan Abdülmecid and Sultan Abdülaziz, and the daughters were Sultans Hatice, Atiyye, Saliha and Adile.

Adile Sultan was born in 1826 when the Janissaries were abolished, which was one of the turning points in Ottoman history. Births in the Ottoman Empire were announced with celebrations regardless of whether the newborn was a boy or girl. Sultan Mahmud II himself named his daughter Adile. The sultan, who was also a poet, used the pseudonym "Adli" in his poems. Inspired by this pseudonym, he called his daughter "Adile," which means fair.

Sultan Mahmud II ordered the birth to be announced to the public and cannons to be fired for three days. These celebrations took place not only in Istanbul and its surrounding regions but across the empire. Edicts were sent to Rumelia and Anatolia by three messengers each to announce the birth, and festivities called "veladet" (meaning "birth") were held in the cities.

Adile Sultan's mother, Zernigar Hanım, died in 1830. Upon her mother's death when she was 4, her father handed her over to his wife, Nevfidan, who had lost her children, to raise her. Her stepmother, who was compassionate and quite devout, took the daughter under her wing and treated her like her own child, as she sought to relieve the pain of her own children's deaths. Adile Sultan included the death of her mother and the compassionate treatment of her stepmother in her poems.

Sultan Mahmud II made sure that Adile Sultan had a good education like his other children. She learned Arabic and Persian from private teachers, took calligraphy lessons and learned about religion and science.

As a result of the lessons she received from Ebubekir Mümtaz Efendi, one of the most famous calligraphers of the period, she also received a calligraphy diploma. At the end of this education, Adile Sultan turned toward poetry.

When Adile Sultan lost her father, Sultan Mahmud II, at the age of 13, his elder brother Sultan Abdülmecid, who acceded to the throne, took care of her. When the daughters of Ottoman sultans reached the age of marriage, good prospective grooms were meticulously investigated at the order of the sultan. Therefore, Mehmed Ali Pasha, who was the Tophane (armory) commander at the time, was deemed a proper groom-to-be and was allowed to marry Adile Sultan in a very ostentatious wedding ceremony.

Adile Sultan and Mehmed Ali Pasha loved each other very much and spent happy days together. They had four children named Sıdıka, Aliye, Ismail and Hayriye. They worked hard to raise their children well and healthily. However, the first three of them did not live long and died at a young age. Hayriye Hanım had the longest life. However, she died when she was still young, in the fourth year of her marriage.

After Mehmed Ali Pasha married Adile Sultan, he was promoted to chief admiral. He served in this position for a long time and as a grand vizier for one year. He died in 1868 during the reign of Sultan Abdülaziz.

‘I would be the sultan’

Adile Sultan had a serious, outspoken and strong character. She was very frank in her words. She was known to scold her brother Sultan Abdülaziz when she heard unpleasant things. One day, there was a quarrel between them and she said, "If I were born a man, I would be the sultan now, not you.”

She was also known for paying close attention to courtly traditions. In this aspect, she earned the respect of the empire. She had furnished the guest reception hall of her house in the old Turkish style. She welcomed everyone including valide sultans (mother sultans), in line with courtly procedures.

For months, she did not answer the visit requests of princesses of the Muhammad Ali dynasty of Egypt, as the dynasty had rebelled against her father Sultan Mahmud II. Sometimes she refused to meet them even though she had appointed a date. This was the attitude she took up against those who crossed red lines. She was very meticulous in maintaining the dignity and respect of the Ottoman Empire.

Such was her meeting with the mother of the famous Khedive Abbas Hilmi Pasha, who is known as “Valide Pasha” in Istanbul. Since she was the princess of the Muhammad Ali dynasty, she had welcomed her while sitting on a high sofa without moving, made her kiss her skirt and placed her on a cushion on the floor.

Adile Sultan had a very special place in the eyes of her nephew Sultan Abdülhamid II. He used to visit her at her home and kiss her hand, ask for a consultation on various issues and request prayer. Sultan Abdülhamid’s daughter Ayşe Sultan tells of Adile Sultan’s relationship with her father in her memoires: “She was sending news when he wanted to meet with my father. In the palace, special preparations were made, and then she would come to the palace. My father kissed the hand of his aunt with respect and veneration, made his aunt sit on the big couch and sat before her. The treasurers would bring her coffee, and my father would take it from the tray with his hand and give it to his aunt. We kissed her hand, making the official bow we made to the sultan. She would address my father as her son, and my father answered, ‘You command, my dear aunt.’ Their conversation would continue for an hour or two, and my father saw her off.”

She was one of the few people Sultan Abdülhamid respected to such an extent. He allocated her 180,000 akçe, which corresponded to a minister's salary at that time. She spent all this money on those in need, as she came into the large inheritance of her father and husband. She had a pompous lifestyle during her husband’s lifetime. However, after the losses she experienced, she withdrew into her house, spending time in worship, studying science and art, and helping the needy.

She used to cover the expenses for the improvement of the poorhouses, meet the needs of schools and encourage children to begin their education. She also used to cover the wedding expenses of girls, help those who took care of patients, bring water to the fountains that had dried up, dig wells and try to lend a helping hand to those in need.

She often went to the tomb of Abu Ayyub al-Ansari, who was a close companion of Prophet Muhammad, and then she would visit the government offices and police stations and bestow gifts on the soldiers and officers. She left many foundational works during her lifetime.

Another tradition that she pursued until her death was that she had ashura (a kind of traditional soup-like dessert made with grains and dried fruits) cooked in cauldrons and distributed it to the public during Muharram, the first month of the Islamic calendar. Due to the large number of people she helped, she knew well what was going on in her country, including at the palace, and acted accordingly.

During the reigns of Sultan Mahmud II, Abdülmecid and Abdülaziz, various orders were granted to statesmen for their service. Such orders were also given during the reign of Sultan Abdülhamid. However, Sultan Abdülhamid introduced a new order for women. This order, called the “Order of Compassion,” was introduced to the public on July 16, 1878. Adile Sultan was granted “The Order of Compassion,” which was given only to women, in 1879 due to her charity and aid.

The poems of Adile Sultan were published by the Ministry of Culture among the Turkish classics. In her poetry, which is a cultural treasure in the strictest sense of the word, a world of deep feeling and contemplation is seen. It has a very simple style compared to other poetry written in the same era. She had a good grasp of Sufi Turkish poetry as well as classical diwan literature.

One of her services to Turkish literature is that she had all the poems of her great grandfather Sultan Suleiman I, aka Suleiman the Magnificent, printed in a printing house for the first time.

She wrote many poems, called “nazire,” in response to the poems of master poets, including Fuzuli. "Nazire" is a poem written in parallel with another poem that has the same genre, subject and measure, but with a new style and perspective.

The sincerity in her poetry draws in the reader. Most of her poems have a religious-Sufi nature. These are poems consisting of elegies, poems praising the Prophet Muhammad and encomiums for great religious men.

She had a strong Sufi aspect and was affiliated with the Bâlâ lodge of the Naqshbandi Order. She improved herself spiritually and transferred her feelings to her poetry. Her painful life was also reflected as a subject of her poems. She wrote touching poems about her mother, father, husband, brothers and children.

Adile Sultan was one of the individuals who was trusted for her piety, generosity, honesty, thoughts and ideas in the empire. She is among those who testified at the Yıldız Court as a witness of the murder in the coup d'etat against her brother Sultan Abdülaziz. She also wrote a long poem about this painful incident that happened to her brother.

Adile Sultan lived during the reign of four sultans and died in 1899. Her death sparked widespread mourning. Her 73 years of life were a poem of lessons. Her grave is in the tomb she built herself in the Eyüpsultan district of Istanbul where her husband and children are also buried. The tomb of Adile Sultan is currently open for visits.