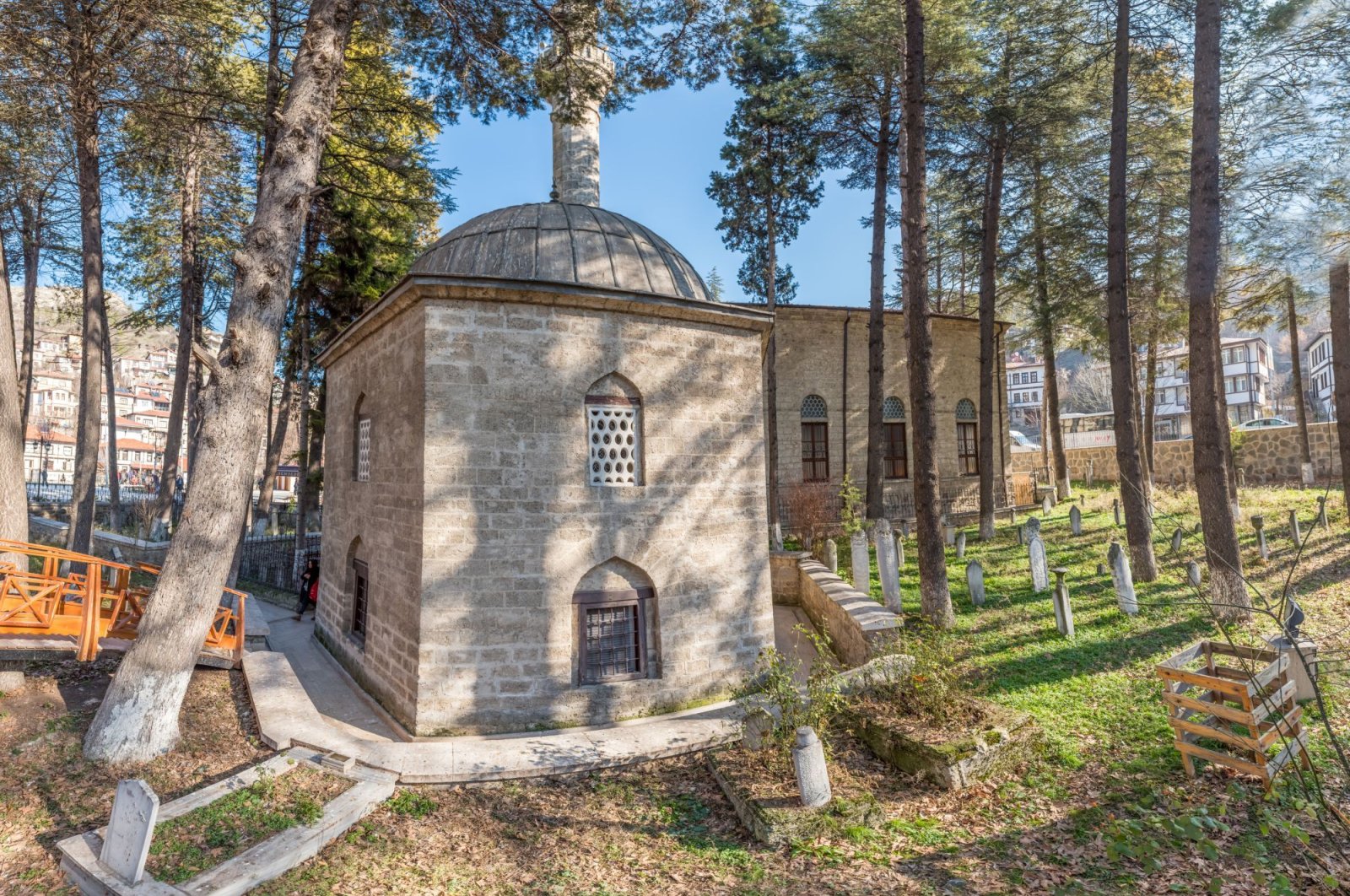 Akshamsaddin's tomb, which is frequently visited by his admirers, is located in the Göynük district of western Bolu province. (iStock Photo)
by ALİ TÜFEKÇİ Apr 21, 2020 2:17 pm
Edited By Irem Yaşar

Although Akshamsaddin is known for his relationship with Mehmed II and helping in the sultan's conquest of Istanbul, he was also a medical scholar who theorized about germs by likening microbes to seeds

The Netflix series “Rise of Empires: Ottoman” features the story of Istanbul's conquest by Sultan Mehmed II, aka Mehmed the Conqueror. One of the biggest shortcomings of the story is that some of the characters are not shown, falsely suggesting they never existed. One of these people is Akshamsaddin, an influential tutor and adviser to Sultan Mehmed.

The series should show him, even if only in a single scene, since he was in the army during the conquest. He was the one who encouraged the sultan and his soldiers the most. Sultan Mehmed appointed him as his spiritual guide. Ottoman archives say that Sultan Mehmed ordered an attack, at a point when the war was at a standstill, and entered the city walls upon receiving news from Akshamsaddin. This and so many other parts in the series, however, feature Mara Hatun instead. So, who is Akshamsaddin?

Your searches will generally say that he was a Sufi scholar but Akshamsaddin was also known as an evliya, the word most commonly used by Muslims to indicate an Islamic saint, among Turkish people. His tomb in the Göynük district of western Bolu province is frequently visited by his admirers. Akshamsaddin was not only a Sufi, however, but also a müderris (professor), medical scholar and poet.

His real name was Shamseddin Muhammad, and he was born in Damascus in 1390. His ancestry from his paternal side dates back to the first caliph Abu Bakr. He came to northern Amasya province with his father at the age of 7 and received his primary education from his family. He memorized the Quran when he was a child.

Besides religious sciences, he also received medical education. When he was appointed as a müderris, this training did not satisfy him in paving the way for a spiritual quest. Thus, he became attached to Hacı Bayram-ı Veli, one of the most famous Sufis of the period. He became his caliph as one of his chief students. With the sign of his teacher, he first settled in Beypazarı, in central Ankara province, and then in Göynük in Bolu province, and engaged in dervish lodge activities.

He was called Akshamsaddin (the prefix "ak" in his name means white in Turkish) and Akşeyh (White Sheikh) because his face, hair and beard grew white as a result of the strict Sufi discipline he underwent, in addition to the white clothes he wore.

It should be noted that Islamic scholars of the classical period underwent a well-rounded education. In religious sciences, all of them received diplomas in higher education up to a certain standard. The practice of having a say is to get ratification. They then concentrated their time on one or several fields in accordance with the needs of the period and their own interests.

In addition to dervish lodge activities in Göynük, Akshamsaddin was also engaged in studies in medicine and pharmacy. He visited the Ottoman palace in western Edirne province thanks to both his teacher Hacı Bayram-ı Veli’s relations with Sultan Murad and his medical knowledge.

On his first visit, Akshamsaddin treated Süleyman Pasha, one of the chief judges of Murad II. He healed him in a way that palace doctors could not predict. On his next visit, he healed the daughter of Sultan Mehmed II.

This is how he met Mehmed the Conqueror and helped support preparations for the conquest of Istanbul. Against those who tried to discourage the sultan, he said, "First of all, Sultan Mehmed II will conquer Constantinople."

Due to the stress brought on by the delay of the conquest in the last days of the war, the sultan became flurried. So, he often sent news to Akshamsaddin, from whom he requested moral support, in addition to wanting to know when the conquest would take place. Finally, he sent his vizier, Ahmed Pasha, saying, “Ask the sheikh, is there any hope of conquering the castle and defeating the enemy?” The answer was, “If so many Muslims and veterans from Prophet Muhammad’s ummah come together and aim for the castle of heretic, I hope the castle will be conquered.”

On the morning of May 29, Sultan Mehmed II toed the mark, and the walls of the city were entered. Zeyrek Mosque was allocated to Akshamsaddin after the conquest. Today, the area continues to live up to its name as the Akshamsaddin neighborhood.

'I am glad that he lived in my time'

Akshamsaddin also found the lost tomb of Abu Ayyub al-Ansari, one of the famous companions of Prophet Muhammad, who had hosted him in Medina. When the spot he found was excavated, a stone plate with the name was unearthed. Later, a large complex was built there by Sultan Mehmed II.

Reportedly, when the sultan grew happy after the conquest, he said about his situation: “The relief that you see in me is not just because of the conquest of this castle. I am glad that an evliya like Akshamsaddin has lived in my time.”

After getting acquainted with him, Sultan Mehmed II often met with Akshamsaddin for his support. They held significant conversations during and after the conquest. When Mehmed II asked to become one of his disciples, Akshamsaddin refused the request of the young sultan. When he insisted several times, Akshamsaddin explained: “Sultan! There is a kind of relish in Sufism. If you embrace it, the sultanate will have no value in your eyes and you will neglect the affairs of the state and the nation because of the taste you find in it. That way, justice will disappear. It is more important that you ensure justice and trust in the country than embrace a cult. If these matters fall into the hands of the incompetent, you will be disobeying the command of Allah, as he commands to give the task to those who are competent. It is more important that you establish justice on earth than embrace a cult. The purpose of adopting a cult is to achieve justice.”

There are many other narrations related to the conquest of Istanbul and Sultan Mehmed II. After working as a müderris at Zeyrek Mosque for a while, he returned to Göynük where he died.

His works and germ theory

The works of Akshamsaddin are also a source of reference. He wrote books in Arabic and Turkish about Sufism and medicine. He tells about the description, purpose, positions and conditions of Sufism. Akshamsaddin explains its concepts and the misunderstood words of some Sufis, such as Ibn Arabi. He says the following about being an evliya: “An evliya is someone who endures the problems coming from people. He takes up challenges, does not complain about the troubles and does not bear enmity. He does not take up a hostile attitude. He is like earth. All kinds of bad things are thrown into the earth. But it always gives good things.”

His two works on medicine and pharmacy are “Maddet'ül-Hayât” (Material of Life) and “Kitab-ı Tıbb” (Book of Medicine). He suggested that all diseases, like plants and animals, have invisible seeds, that is, he pointed to germs at a time when the microscope was not yet invented. “Major diseases have seeds and roots according to their varieties, like grass seed and grass-root. Indeed, some of the hereditary diseases that pass from father and mother, such as epilepsy, podagra and leprosy, sometimes reappear seven years after the disease is seen. The seeds of the diseases that are caused by food and drink come out and grow quickly,” Akshamsaddin says in his “Maddet'ül-Hayât.”

During the same period in Europe, diseases were seen as a punishment from God. Even when Fracastoro said in his “De Contagione et Contagione Morbis” ("On Contagion and Contagious Disease") that infectious diseases passed from person to person, from animal to animal and from plant and animal to humans through “seminas” 100 years after Akshamsaddin, and for the first time in Europe, he implied that such pandemic diseases were still divine punishment. In the history of medicine, microorganisms remained undiscovered through observation until the 19th century.

“Maddet'ül-Hayât” is an important resource not only for diseases but also for botany and pharmacy. Akshamsaddin made the composition of a miraculous drug, good for diseases in 30 of the books' chapters. He also tells about the extraction of juice, essence and oil of certain substances to be used in pharmaceutical production. After explaining his methods of extraction and distillation, Akshamsaddin briefly talks about how these can be used on certain diseases.

Apart from these, Akshamsaddin mentions healing stones, antidotes, types of fabric beneficial to the body, the people of Lot and their destruction, practical solutions to common health problems and issues to be considered according to the seasons.

'We come naked, we go naked'

Akshamsaddin's life is notable for the conquest of Istanbul and his relations with Sultan Mehmed II, as well as for his places in the history of medicine and Sufism. His words are also exemplary for today. Akshamsaddin appointed his eldest son as a caliph to replace him. The branch of the Bayrami sect carried out by Akshamsaddin was called “Şemsiyye” in reference to his name.

Before he died in 1459, he gave all his possessions to the service of those who came to his dervish lodge, leaving very few things behind. He told his seven sons, “We come naked, we go naked. We go from one realm to the other, what do we have between the two?"

Akshamsaddin was also a poet and he says in one of his poems, “O Şems, drink the poison of separation (death) to be reunited with the beloved / For who wants a blooming rose will endure the torment of its thorns."