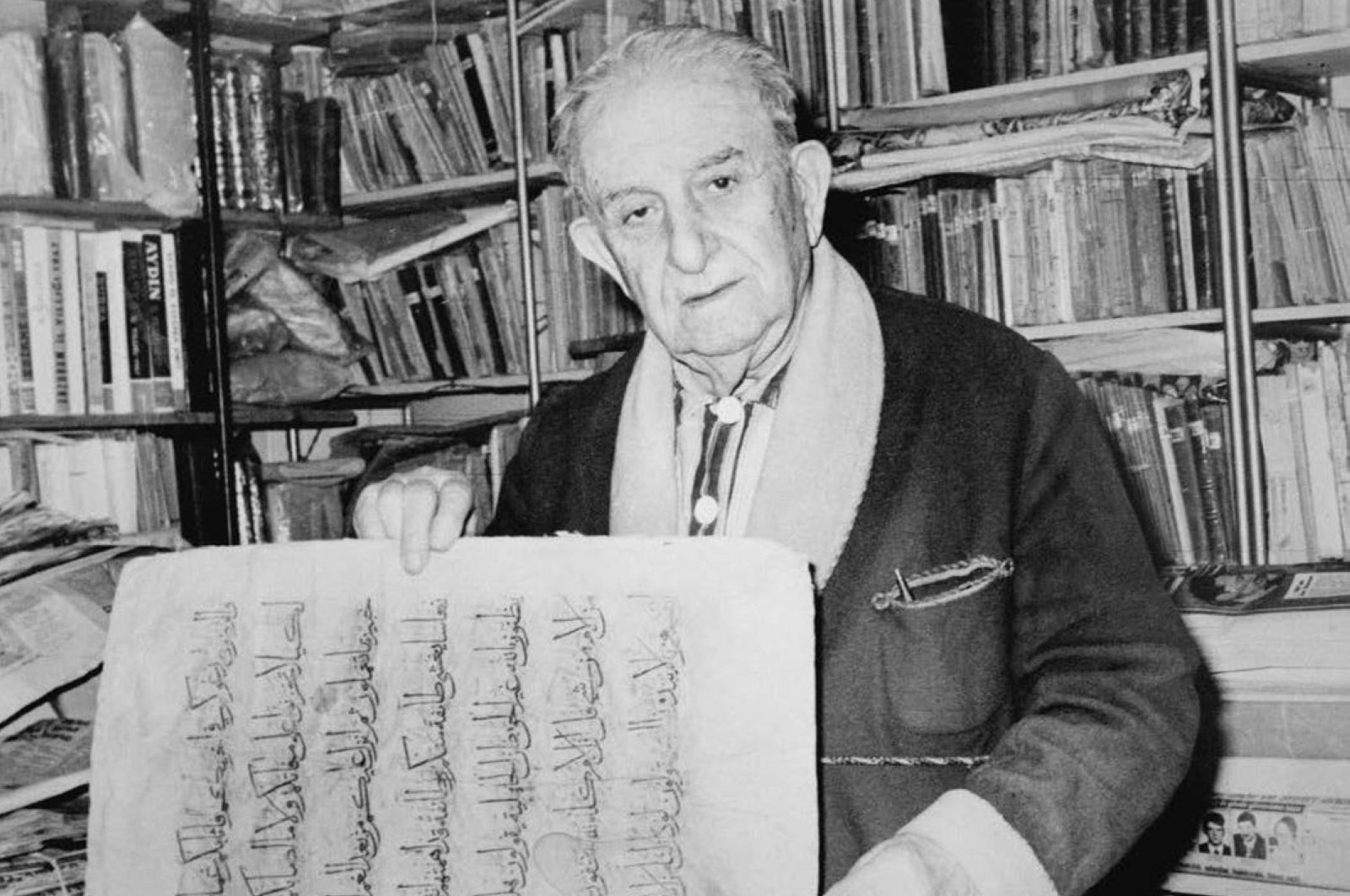 In this undated file photo, Ibrahim Hakkı Konyalı is seen with a document in a library.
by ALİ TÜFEKÇİ Aug 26, 2020 1:19 pm
Edited By Irem Yaşar

Speaking of the preservation of historical works in Turkey, Ibrahim Hakkı Konyalı is one of the most successful names that come to mind

During the years of transition from the Ottoman Empire to the Republic, there were a number of grave incidents in the field of culture and arts. With the heat of the revolution, the political, ideological and social norms of the old era were undergoing a dramatic change. Cultural heritage and works of art also had their share of these harsh interventions. An intemperate understanding was developed which thought that upholding the Republic meant destroying everything belonging to the Ottoman Empire.

However, this is a natural situation when we think of all the revolutions throughout history in the world at large. In the first years of each revolution, strict and improper practices are seen. Over time, as the new system settles in, these extremes are also tempered.

Ibrahim Hakkı Konyalı is one of the witnesses of the destruction of culture and arts in such an era. He is a man of many hats, bearing the titles of scientist, teacher, art historian, inscription expert, publisher and many more.

Born in central Konya province in 1896, Konyalı was a descendant of the noble Anatolian Seljuk dynasty. He received education at a rüşdiye (Ottoman middle school) and madrasa (university) during the reign of Sultan Abdülhamid II. In his youth, he adopted the name Hakkı with the influence of the book “Marifetname” (“Book of Gnosis”) by the famous Ottoman scholar Ibrahim Hakkı Erzurumi. He graduated from the railroad school, which was opened during World War I, becoming one of the first railroad experts in the country.

Konyalı first served as a station manager in his career as a civil servant and then taught Turkish for a while. He later became the dean at the Madrasa Department of Istanbul Sheikhdom Office (Istanbul Meşihat Dairesi in Turkish). At the time of the declaration of the Republic, he was employed as an expert in the archives of the Prime Ministry, the General Directorate of Military Museums and Foundations. He played the leading role in the establishment of the Museum of Turkish Calligraphy Art of the General Directorate of Foundations.

After starting his publishing career, Konyalı wrote for many newspapers and magazines of the period. He mainly prepared articles on history and published his own magazine for a while. When he passed away in 1986, he took his place among the well-known figures of the printing sector and of recent history with his services.

Konyalı had a great knowledge of history and high sensitivity for historical artifacts, books, inscriptions and monuments for every work that made history. He was someone who valued profound knowledge and could not think of anything that could replace his love for learning. “I do not write without seeing, I have to see the subject I will write. By the grace of Allah, there are no inscriptions that I have not read in Anatolia in 50 years. For the past 50-60 years, there has been no one in the world who can read inscriptions, and we are the only ones left. I have had an eye disease lately. I hope Allah does not take away my eyesight. I invited our scholars to the archives so they could read inscriptions. I invited them to the test. None of them showed up. I wrote that in the paper. Nobody dared to come to this reading test yet,” he said in an interview, telling how he challenged others with his knowledge. He never hesitated to criticize bad practices for proving his intelligence.

Saving the minarets of Hagia Sophia

Among the bad practices that he wrote down were the ones done during the conversion of Hagia Sophia into a museum. In a report he prepared in 1936, he told the authorities about the construction date of Hagia Sophia, the damage the building suffered from earthquakes, the renovations carried out during the Byzantine and Ottoman periods, and the importance of the minarets and many other details. By doing so, he was able to prevent the destruction of the minarets.

The Ottoman military band, Mehter, which birthed the Alla Turca music style in Europe, was abolished during the Republican era on the grounds that it was a reminder of the Ottomans. Then-President Celal Bayar liked the Scottish historical marching band very much during a visit to Europe in 1952 and told the chief of general staff that a similar marching band could be established in Turkey now. The chief of general staff, Nuri Yamut, went to Konyalı for help, who was in charge of the founding of the military museum. He said that a Mehter could be established, relating his efforts in this regard and receiving the necessary permissions. Mehter bands, which are still active today, are a result of Konyalı’s efforts.

Konyalı’s efforts to protect historical artifacts are not limited to this alone. He performed great services in Turkish recordkeeping. He was the first to find Ottoman geographer, navigator and cartographer Piri Reis’ maps and had them published. In 1931, he noticed that the Ottoman archive documents were sold to Bulgaria in bales. He reported this and informed the public about the situation. He then had some of them taken back with the necessary applications.

‘I have worked in masks for years’

He endeavored to discover, preserve and recover historical artifacts, especially as part of his service at the Turkish Military Museum and the Turkish Calligraphy Museum. He described his works in the Calligraphy Museum as follows: “During the State Ministry of Hüsamettin Atabeyli, the Sultan Selim Madrasa, built by Ottoman architect Mimar Sinan on behalf of Sultan Selim I, aka Selim the Grim, per the order of the sultan’s son in the Yenibahçe neighborhood in Istanbul’s Fatih district, fell into ruins. We had this place repaired. For years, I saved miserable manuscripts by wearing a medical mask on my face and I opened a manuscript museum there. I worked with a mask as the manuscripts became rotten, spreading poison and disease-causing germs. The General Directorate of Foundations closed this place, causing the works to be looted.”

He wrote the history of Konya, Karaman, Alanya, Erzurum, Niğde and Aksaray provinces, as well as Üsküdar district and many other cities and provinces based on inscriptions and monuments from ancient times. He also prepared independent works about many historical buildings. He has books on the history of warfare, such as “Topun Tarihi” (“The History of the Cannon”) and “Kılıcın ve Başka Kabzalı Kesici Silâhların Tarihi” (“The History of the Sword and Other Handheld Edged Weapons”). All of these works are first-hand sources for today's researchers.

Konyalı holds the High Service Award (1979) from the Ministry of Culture and title of honorary Ph.D. from Selçuk University (1981). He donated the documents, photographs and printed media documents he collected throughout his life to the Ibrahim Hakkı Konyalı Foundation Library and Archive, which was established on his behalf by the General Directorate of Foundations in Üsküdar, Istanbul in 1979.

Konyalı died on Aug. 20, 1984, in the Akşehir district of Konya, and his body was brought to Istanbul and buried in the Karacaahmet Cemetery.