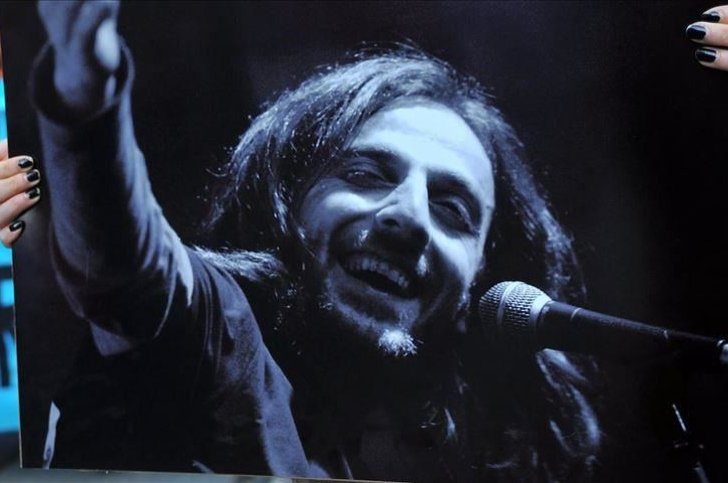 Despite warnings from his doctors after being diagnosed with cancer, Kazım Koyuncu continued to give concerts. (AA Photo)
by Anadolu Agency Jun 25, 2020 3:31 pm
Edited By Irem Yaşar
RECOMMENDED

On Thursday, a Turkish singer known for blending traditional Black Sea folk music with rock rhythms was commemorated on the 15th anniversary of his passing.

Earlier this week, due to the coronavirus outbreak, Kazım Koyuncu's family announced the cancelation of an annual commemoration ceremony in his hometown in the Black Sea province of Artvin.

In a statement, the Koyuncu family suggested alternative ways to honor the unique musician, saying: "On June 25, you can look at the sky and smile, or play with a child, perhaps add a meal to the table, light a candle, listen to one of his favorite songs, think about our memories ... draw a picture, look at his photo and maybe chat with him."

Koyuncu took the folk songs of the Laz ethnic group, who live in Turkey's Black Sea region, and brought their culture into the mainstream, combining traditional instruments, such as the stringed kemenche and tulum (bagpipe), with modern instruments like the electronic guitar, bass guitar and drums.

The size of Turkey's Laz population is unknown, but they mainly live in the northeastern section of Turkey's Black Sea region and also across the land border into Georgia.

Once Koyuncu was quoted as saying, "I am a musician, then I am from the Black Sea, but above all, I am a revolutionary."

Outspoken on environmental issues, he campaigned against the building of a nuclear power plant in Turkey.

Koyuncu was born on Nov. 7, 1971, in the district of Hopa in the Black Sea province of Artvin, though his birth was only made official about a year later, a common practice in those days.

His first instrument was a mandolin, which he began playing during secondary school.

In 1989, he enrolled in Istanbul University but ultimately did not graduate. It was during his university years that his musical career grew more active, leading him to put together a band in 1992.

Besides singing in Turkish, Koyuncu also sang in Laz, as well as other languages spoken in northwestern Turkey, such as Homshetsi and Georgian.

Their first album, the critically acclaimed "Va Mskunan" ("We Don't Know"), hit the shelves in 1995. Following the release of their second album, "Igzas" ("Walking"), the band split up in 1996.

Koyuncu later embarked on a solo music career with his first album "Viya!" released in 2001. A year later, he rose to fame by doing the score for a blockbuster TV series, "Gülbeyaz," focusing on life in the Black Sea.

His second album, "Hayde" ("Let's Go"), came out in 2004, the same year he was diagnosed with cancer. Despite warnings from his doctors, he continued to perform on stage.

His swan song came on Feb. 4, 2005, at Istanbul's Yeni Melek Show Center, where he took the stage for fans wearing a knit cap covering his head after losing his hair to chemotherapy.

Many blamed his illness on the effects of radiation from the 1986 Chernobyl nuclear plant disaster in Ukraine, on the other side of the Black Sea, which took place when Koyuncu was around 15 years old.