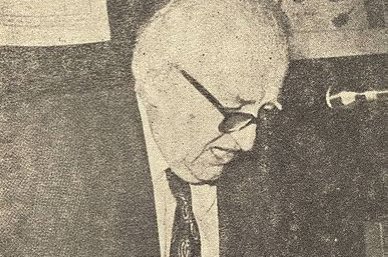 An undated photo showing Ömer Lütfi Barkan at one of his classes.
by Hakan Arslanbenzer Jul 17, 2020 11:27 am
Edited By Irem Yaşar
RECOMMENDED

Ömer Lütfi Barkan, a prominent Ottomanist scholar of the Republican period in Turkey, was one of the founders of the science of economic history in the country.

Barkan was born in 1902 in a neighborhood called Kıyık in the northwestern city of Edirne. His father, Ismail Efendi, was originally from the Stara Zagora province of Bulgaria and his mother’s name was Gülsüm. Barkan had only one sibling, a sister named Fatma. Fatma Hanım was a schoolteacher. His maternal uncle, Mustafa Bey, was also a geography teacher at the Kuleli Military High School.

Barkan was first schooled at Edirne Numune Mektebi (Secondary Education School) before he enrolled at the Muallim Mektebi (Teachers’ School). After his graduation in 1920, Barkan worked as an elementary school teacher for three years in Edirne, after which, he moved to Istanbul and enrolled at the Yüksek Muallim Mektebi (Teachers’ College). He then studied philosophy at the Darülfünun (house of sciences), which was the only higher education institution in Turkey before 1933, later becoming Istanbul University.

In 1927, Barkan moved to Strasbourg, situated at the eastern border of France next to Germany, to improve his French and study law and literature. Indeed, Albert Gabriel, the head of the French Archeology Institute in Istanbul, convinced him to study in Europe, which Lucien Febvre, the founder of the Annales History School called “a happy coincidence.” In Strasbourg, Barkan studied with great historians like Marc Bloch, Maurice Halbwchs and Henri Baulig. According to Febvre, Barkan's choice of career was heavily influenced by his education at the Annales History School, and he decided to devote his life to economic history.

Four years later, Barkan returned to Turkey and became a philosophy teacher at Eskişehir High School. He then began to work as an associate professor of revolutionary history, though without a doctorate degree, at what had become Istanbul University due to the University Reform of 1933. His supervisor was professor Yusuf Kemal Tengirşenk.

Barkan joined the army to complete his mandatory military service in 1934 and 1935, after which he was assigned to do economic history and geography lectures for the Faculty of Economics. Meanwhile, he wrote his early articles on Ottoman economic history, which were published in prominent journals like Siyasal Bilgiler Fakültesi Mecmuası (the Journal of Faculty of Political Sciences). Those articles inspired the dean of the Faculty of Economics, Ömer Celal Sarç, to take Barkan under his wing. In his official request, Sarç noted the faculty’s need to have a national associate professor to work with Alexander Rüstow, an exiled German professor.

Barkan kept his position at the Revolutionary History Department but also continued to give classes at the art and science faculties, too, for years. Meanwhile, in 1938, he passed the foreign language test required for associate professors. Ali Fuat Başgil and Hüseyin Şükrü Baban, prominent full professors at the Faculty of Economics, were the jurists of Barkan’s foreign language test. As a part of requirements to become an official associate professor, he submitted the dissertation “Osmanlı İmparatorluğu’nda Kuruluş Devrinde Toprak Meseleleri” ("Land Issues at the Initial Period of the Ottoman Empire") in 1939. His panel was made up of prominent authors, including sociologist Mehmet Fuat Köprülü and Rüstow. Barkan became a full professor just two years after his dissertation.

Barkan became the head of the economic history department in 1950. He married Süreyya Meriç, who was a professor of physics, a year later. They had three sons, Ziya Budak, Ismail Özdal and Ömer Erçin. Barkan worked as the dean of the Faculty of Economics from 1950 to 1952. In 1955, he founded the Turkish Economic History Institute and directed it until his retirement in 1972.

Barkan is considered one of the game changers in Turkish historiography. As a follower of the Annales History School, he focused on economical documents and inventories in archives, which helped him reestablish the Ottoman classical history with a contemporary methodology. His major focus was the land regime of the Ottoman state, for which he wrote about 150 articles. Many of his writings are very long and include related historical documents. He penned numerous articles in publications such as İktisat Fakültesi Mecmuası (the Journal of Faculty of Economics), Belleten (the Scientific Journal) and Vakıflar Dergisi (the Journal of Foundations).

Barkan founded the historiography of the Ottoman land law, but he didn’t limit himself to the 16th-century classical period. He also wrote about the land law of the Tanzimat period in the 19th century. In fact, he compared Ottoman history to changes in economic and political regimes. He wrote on religion's relations to the economy, including the role of sultans as legislators, the Islamic boundaries of Ottoman law, the disorganization of written law and more.

Barkan also studied Ottoman financial foundations, which were the grounds of their economy. Using historical documents, he showed how their organizations actually worked. He mainly used the foundations' accounting books to grasp the material continuation and its changes.

As an economic historian, Barkan was realist, even positivist to some extent, which left a great impact on all who followed, including Halil Inalcık.

Barkan followed Köprülü in explaining the financial organizations of the Ottoman state through historiography. In his famous book “Kolonizatör Türk Dervişleri” ("Colonizer Turkish Dervishes"), he said that he accepts Köprülü’s thesis that the Sufis helped warriors establish a new Turkish state at the borders of the Seljuk and Byzantine empires. Barkan’s brilliance was that he submitted written proof for such a thesis that included 225 archived documents on the land and population of the 16th century.

What is also new in Barkan’s approach is that he considered Sufi lodges, which had been used in multifunctional ways, to be economic institutions. At times, the lodges were used as military posts, caravanserais or simply as farms.

Another originality of Barkan’s establishment thesis is that he criticizes the heterodoxy approach, which implies that the elements of the early Ottoman population were non-Sunni groups that were then transformed into a Sunni nation. Barkan thought that we cannot look at these heterodox groups as a harmonious block because they were divided and scattered. Among them, many were coping with Sunni customs while still using nontraditional concepts and praxis.

Barkan was a member of Türk Tarih Kurumu (the Turkish Historical Society), the UNESCO National Committee, İnkılap Tarihi Enstitüsü (the Revolutionary History Institute), the Serbian Science Academy, and the Ottoman and pre-Ottoman Studies Committee of the International Congress of the Orientalists. Strasbourg University granted him an honorary doctorate. He died on Aug. 23, 1979, in Istanbul.