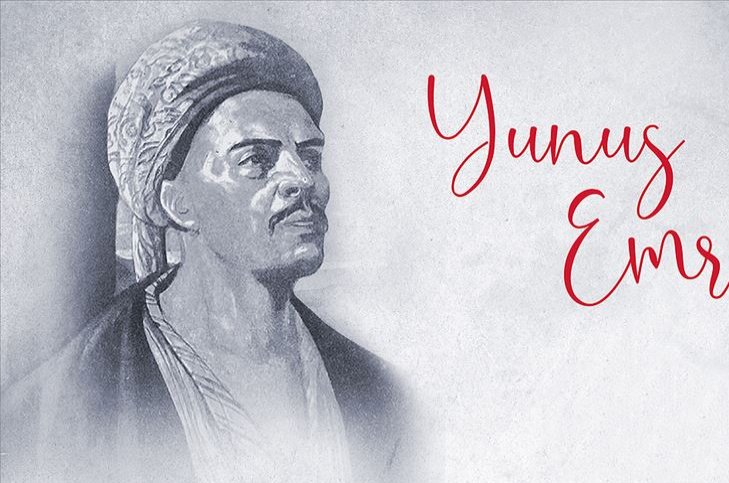 As there is no available visual source beloging to Yunus Emre, this common depiction is used to portray him. (AA Photo)
by Anadolu Agency May 12, 2020 1:38 pm
Edited By Irem Yaşar
RECOMMENDED

Yunus Emre was a great Turkish thinker and poet who has been a leading light for humanity for centuries with his suggestions to adopt the values of patience, satisfaction, tolerance, generosity, goodness and virtue in line with the teachings of Islam. The thinker, whose exact date of birth is unknown, lived in Anatolia from the mid-13th century to the first quarter of the 14th century, according to various sources.

Yunus Emre, one of the most important fathers of Turkish-Islamic folk thought, has two works called “Risâletü'n-Nushiyye,” written in 1307-1308, and “Divan,” composed of his poems compiled by his lovers after his death. The great Sufi thinker and folk poet is considered one of the spiritual architects of Anatolia.

Writing his poems in folk language, in which he described the divine love that every believer seeks, he played a role in the formation of the dialect called "old Anatolian Turkish," which constitutes the first phase of the historical cycle of the Turkish language.

Yunus Emre is remembered every year in early May with events held during the Yunus Emre Culture and Art Week. This year the commemoration ceremony held at Yunus Emre’s tomb in the Yunus Emre neighborhood of Mihalıççık district of central Eskişehir province has been canceled as part of measures to combat the coronavirus outbreak.

Kamil Sarıtaş – an assistant professor at the Department of Islamic Philosophy, Faculty of Theology, at Eskişehir Osmangazi University (ESOGU), and the head of Yunusemre Research Center – told Anadolu Agency (AA) that Yunus Emre is considered a spiritual doctor.

Recalling that Yunus Emre was born in Sarıköy (now the Yunus Emre neighborhood) in Mihalıççık, Sarıtaş said: “He created Turkish Sufi literature catering to the public's taste, completely different from the Persian Sufi works. For this reason, he is considered the founder of Turkish Sufi literature in Anatolia. In his poems, he expressed the divine love that every believer seeks.”

Emphasizing that Yunus Emre lived a simple and unpretentious life, Sarıtaş noted that, with his sayings and life, the Sufi poet managed to take a special place in the hearts of everyone who has become acquainted with his works since the 13th century. Pointing out that he was very influential in Sufism with his short, concise and effective sayings, Sarıtaş continued: “He has always been the carrier of Islam's messages of faith, love, hope and justice that transcend time and space. Yunus Emre, who said ‘Whoever dies is the animal, the lover does not die’ continues to remain alive and keep people alive with his thoughts, even though it has been hundreds of years since he passed away.”

Sarıtaş noted that Yunus Emre's work written in the mathnawi form – a poem based on independent, internally rhyming lines – titled “Risâletü'n-Nushiyye,” includes religious and Sufi advice, while “Divan” consists of his poems that were widely read in Anatolia when he was alive.

Underlining that Yunus Emre's hymns have a great influence on the continued traces of Muslim-Turkish culture across a wide region stretching from Anatolia to the Balkans, Sarıtaş noted, “These hymns have also become the common idea and voice of the sects operating in Anatolia and Rumelia for centuries.”

Recalling that Yunus Emre lived in a period in which the Anatolian Seljuk State, shaken by external influences, was collapsing, Sarıtaş said: “Moreover, those were the years in which Anatolian Turks were overwhelmed by Mongolian plundering, internal quarrels and strife, weakness of political authority, and famine and drought. It was a period when small and large Turkish principalities, especially the Ottoman Principality, sprouted in various parts of Anatolia. In such an environment, Yunus Emre lit up a glimmer of hope for Anatolian people with the love, trust, morality, justice and belief in the hereafter stipulated by Islam, and managed to have a special place in the hearts of Turkish people.”

Sarıtaş mentioned that Yunus Emre maintained the epoch starting with the wisdom of Ahmad Yasawi and his dervishes in Central Asia and translated the classical Sufi terminology into Turkish.

He also noted that Yunus Emre made a significant contribution to his successors' works in the field of Turkish literature, dervish poems, Bektashi poems and love literature in his unique style, adding that Yunus Emre strove to fill hearts with love, wisdom and service. Underlining that he is one of the greatest thinkers of Turkish literature, Sarıtaş continued: “Yunus Emre also wandered in Anatolia like a folk doctor in a sense, tried to find solutions to the problems of the people and restored the psychological memory of the society. Yunus Emre's poems, which render ‘restorative mental health' service in a sense, concern not only the people of his time but also the people of today. Every time we read his poems, we see that he speaks of religious and moral values and that he emphasizes that people will always be happy and safe by keeping God in mind. Yunus Emre offers us the key to true happiness on the path of truth. We still need Yunus Emre’s language and heart as we needed them yesterday. We need Yunus Emre’s thought and belief in preventing all kinds of violence. For this reason, we should keep Yunus Emre alive not only in the names of schools, streets and institutes, but in every moment of our lives.”