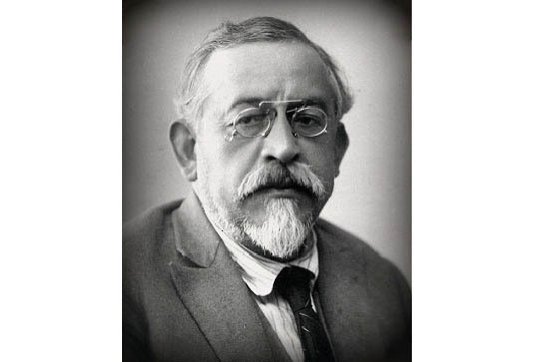 Yusuf Akçura is especially known for his famous “Üç Tarz-ı Siyaset” article.
by Hakan Arslanbenzer
May 22, 2020 10:27 am

Turkish political thought is said to have developed through three types or styles (“üç tarz”) toward the end of World War I: Ottomanism, Islamism and nationalism. The Turkish phrase for "three styles" entered into use in various subjects once it became common among the intellectuals. Nobody would find it peculiar if you mention the three types of cooking using its Ottoman Turkish version, “üç tarz-ı.”

However, many people have forgotten or never learned the real source of the three styles of discourse. “Üç tarz-ı siyaset” ("Three styles of politics") was the title of a long article written by Yusuf Akçura, one of the early authors of Turkish nationalism in the Abdülhamid II era. Akçura gave a thorough historical summary of the three styles of politics, saying that the Ottoman rulers experienced the first two styles while the latter was only mentioned in some writings of certain authors. In the end, instead of identifying any of the three identities as superior, Akçura asks: “The question that has occupied me still remains: Which of the political styles, that of Muslims or Turks, would be more useful and feasible for the Ottoman State?”

Akçura was born on Dec. 2, 1876, in Simbir (now Ulyanovsk) to a wealthy, noble Crimean Turkish family. His father, Hasan Akçurin, ran a baize factory in Kazan, while his mother, Bibi Kamer Banu, was a housewife. He lost his father at the age of 2, and his mother died in a severe accident in 1883, which led his family to move to Istanbul.

His mother Banu remarried an Istanbul resident, Osman Bey from Dagestan, who took care of Yusuf and helped him receive proper education in military schools. Akçura graduated from the Kuleli Military High School and enrolled at Harbiyye (Military College) in 1892. However, he was arrested for his political activities during his second year at the military college. The school administration allowed him to return after serving his term since his professors deemed him a hard-working student.

After his graduation, Akçura was arrested again because of his connection with the İttihat ve Terakki Cemiyeti (Committee of Progress and Union, CPU), the secret revolutionary party that worked to press Abdülhamid II to announce the Constitution again. In his memoirs, he admits that his nationalist feelings were born during his second arrest.

Akçura was exiled to Tripoli in 1897, together with his comrades from the CPU. However, he was later released, and his military rank was restored. He worked as a teacher and clerk at the general staff office in Tripoli for a while before fleeing to Tunisia in 1899 to reach Europe from there to continue his studies in a higher education institution.

Among the runaways of the CPU, Akçura was perhaps the one who best utilized the higher education possibilities in Europe. He enrolled at the Ecole Libre de Sciences Politique (School of Political Sciences) in Paris. There he met Ahmet Rıza, the leader of the Young Turk movement in exile, and began to write in Şura-yı Ümmet (Council of the Ummah), the official periodical published by the CPU branch in Paris.

Akçura visited Kazan, where he wrote his famous article, “Üç Tarz-ı Siyaset," after graduating from the university in 1903. He sent the article to the “Muteber Türk” ("The Respected Turk") journal in Cairo in order for it to be published in installments from April to May 1904. Ali Kemal, a leading Ottoman journalist, wrote a critique of Akçura’s article, accusing him of daydreaming, which in fact didn’t meet the socio-political analysis of Akçura. Kemal argued that the three identities, namely Ottoman, Turk and Muslim, cannot be separated from each other. Thus, there was no need to renew work relying on any of those. The only thing the Muslim Ottoman Turks would do was to stay as they were. Later events of history would prove Akçura right while Kemal’s response would be erased forever, only to be spotted by the historians.

Akçura didn’t leave Kazan until the announcement of the Second Constitution in 1908. There, he worked as a teacher along with his activities as a publisher and politician. He was involved with the Russian Muslims’ movement, “Cedidçilik, a modernist Muslim movement in Russia. He published a journal named “Kazan Muhbiri” ("Kazan Reporter") to propagate his nationalist ideas among the Muslims. He also published a book named “Ulum ve Tarih” ("The Sciences and History") in 1906 in Kazan.

He did not have the opportunity to be elected for the Duma, the Russian parliament, since the Russian imperial government arrested and kept him in prison for 43 days in order to prevent him from being elected. He published his prison memoirs, namely “Mevkufiyet Hatıraları” ("Memoirs of a Prison"), in 1907. Eventually, Akçura returned to Istanbul after Abdülhamid II announced the Second Constitution after the CPU revolts in the Balkans.

Akçura’s contributions in Istanbul during the Second Constitutional era include his efforts to create nationalist associations such as the “Türk Yurdu," meaning Turkish home. He was also active with the periodical of the association carrying the same name. Akçura attended several international conferences in Europe concerning the situation of the Russian Muslims during World War I. He also represented the Ottoman Red Crescent Association in Europe and Russia. At the end of the Great War, the English occupiers arrested Akçura.

After his release, Akçura married and moved to Ankara in 1920 in order to participate in the National Struggle in Anatolia. He worked for the Ministry of Education before he was transferred to the headquarters of Kazım Karabekir as a reserve officer.

After the War of Independence was won and the Republic was announced, Akçura stayed among the inner circle of the Kemalists. He remained a member of Parliament, to which he was elected in 1924, until his death. He was assigned as the chairman of the Turkish History Institution in 1932 and also served as a history professor at Istanbul University after the so-called university reform.

Akçura died on Mar. 11, 1935, in Istanbul. His grave is at the Edirnekapı Martyrs Cemetery.

Though he wrote many articles and books on history and politics, the famous “Üç Tarz-ı Siyaset” article is still considered his masterpiece due to its impact on Turkish nationalists, including Mustafa Kemal Atatürk. Some people think that Akçura’s articles were used as the political program of Kemalism during the early Republican era. Akçura’s main idea that Islamism and Ottomanism were not capable of rescuing the Turks and that only Turkish nationalism was valid as an ideology to form a nation of Ottoman Muslims was reflected in the thoughts of Atatürk in his well-known “Nutuk” ("The Speech").